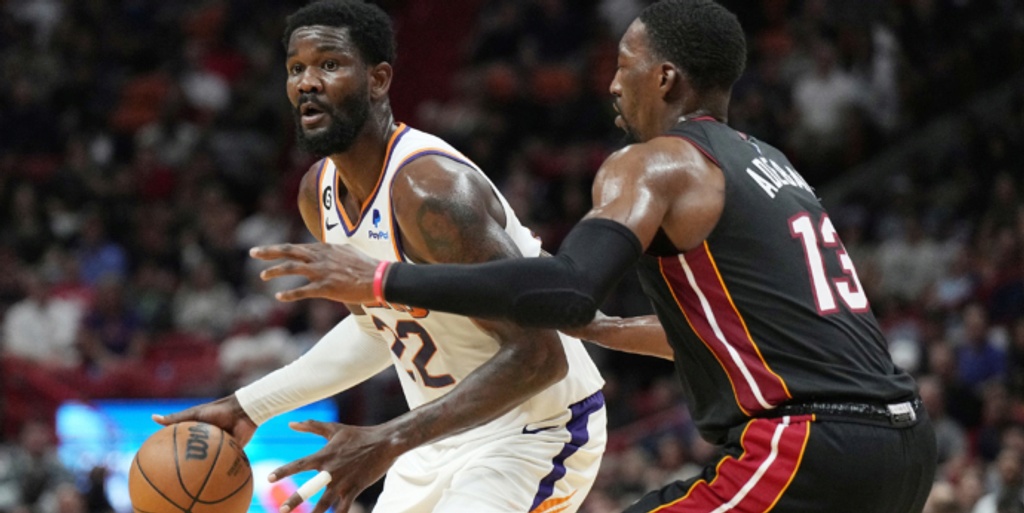 It was a big night for Miami Heat star Bam Adebayo against the Phoenix Suns on Monday night.

Adebayo dropped a season-high 30 points, with 14 of those coming in the fourth quarter. He also added 10 rebounds, with 6 of those coming on the offensive end. Being a plus-12 in a game the Heat won by one point speaks a bit to the impact he had in his 36 minutes.

There were plenty of highlights from Adebayo's evening, including plenty of transition goodness as the ball-handler. What stood out to me was this early first-quarter possession.

That's Mikal Bridges, quietly having a career year, getting another valuable on-ball rep. He runs a ball-screen with Deandre Ayton, one that required a re-screen before capping things with a pull-up middy. But peep Miami's side of the equation.

Adebayo, the premier switch big in the NBA, is in a drop on this possession. Max Strus is tasked with staying attached to Bridges; he's successful on the first screen, but not so much on the second. Instead of Adebayo stepping up to switch onto Bridges, Kyle Lowry helps off of Torrey Craig to stunt at the Bridges drive.

The possession ends with a bucket, of course, but it's time we examine the increased frequency of Adebayo operating in a drop defensively.

Per Second Spectrum, Adebayo defended 15 picks in a drop on Monday night, marking the third straight game that he's eclipsed double figures in that scenario. Between this game and the two games against the Charlotte Hornets last week, Adebayo has defended 53 picks in drop coverage.

On its face, 53 picks in three games isn't a large number. It is rare for Adebayo; he hasn't had a three-game stretch of double-digit reps like this since Game 4 through Game 6 of the 2020 Eastern Conference Finals (16, 14 and 15 picks respectively). You'd have to go back to the beginning of that regular season — a stretch between Oct. 27 and Oct. 31 — to find a three-game stretch with more picks defended in a drop.

The results have been uneven so far. On one hand, they've succeeded in shifting Miami's opponent's shot profile a bit. Prior to this three game stretch, here's where the Heat ranked in terms of shot rate (percentage of field goals) allowed.

In simpler terms — the Heat were preventing shots at the rim, but giving up a ton of shots from deep in the process. Because the Heat (read: Bam) switched at a high rate, teams weren't generating a ton of paint touches with dribble penetration. And to that point: the Heat defended 38 drives per 100 possessions through Nov. 9, the lowest mark in the NBA.

Instead, they'd often manipulate matchups against those switches in an effort to force the Heat to send help. When extra attention was allocated, fruitful three-pointers would present themselves.

Over the past three games, this has shifted some. Here's the opponent shot profile:

You see a pretty sizable drop-off in three-point rate, with that drop entirely coming from above-the-break threes. In turn, the Heat have allowed a larger share of mid-range jumpers (good) and shots at the rim (different, requires context). The Heat are defending slightly more drives (40.2 per 100 possessions), though that would still be a top-three mark in the league if extrapolated across the season.

The rise in shots at the rim and from the corners deserve further examination. Natrually, if you're forcing ball-handlers off the three-point line, they're going to venture more into space. If the screen navigation isn't up to par, those ball-handlers will have more space to explore comfortably.

The gamble the Heat are making is essentially, "You can get to the rim, but you have to finish over Bam Adebayo. Good luck!" You can understand that gamble with reps like these:

I do wonder if teams start challenging Adebayo more moving forward in this alignment. He does a lot of work from the ground, flashing his hands and stunting at ball-handlers in an effort to bait them into making reads. That could lead to some openings for more aggressive drivers.

A quieter subplot to follow will be how much space Adebayo gives in the drop. Turning threes into mid-range shots can be viewed as good process, broadly. But it's also worth noting that not all mid-range shots are bad shots. Making teams live on long-twos is the result you want; if they're able to feast around the elbows or slightly lower, things get dicier.

Most guards are comfortable with these intermediate looks.

And because the Heat don't want to give up those kind of looks, they've countered with digs or stunts from the perimeter. The issue is that some of those stunts are (still) coming from the corners. We can revisit the Bridges shot from earlier in the piece. Watch Lowry here:

This possession against the Charlotte Hornets ends in an offensive foul, but look at Strus:

Under Spoelstra, the Heat have been good about knowing who to help off of. That type of planning, aside from your egregious non-shooters (think Matisse Thybulle), is typically saved for the postseason. The Heat will have to live in that bag if they're sticking with the aggressive corner help we've seen them complement their switching with.

Ultimately, this may just come back down to screen navigation. Can the guard stable — Lowry, Gabe Vincent, Strus, Tyler Herro and Victor Oladipo (when they return) — navigate cleanly enough to not need those stunts?

If they can, the Heat may be able to have their cake and eat it too. Keep Adebayo near the rim and in rebound positioning; lower the amount of threes they're giving up; send help towards drivers when poor shooters are stashed in the corner so they can allow a healthier shot diet while keeping up their Heat-like pressure.

If not, it'll likely go back to switching Adebayo onto the perimeter and navigating the back-end as best they can.