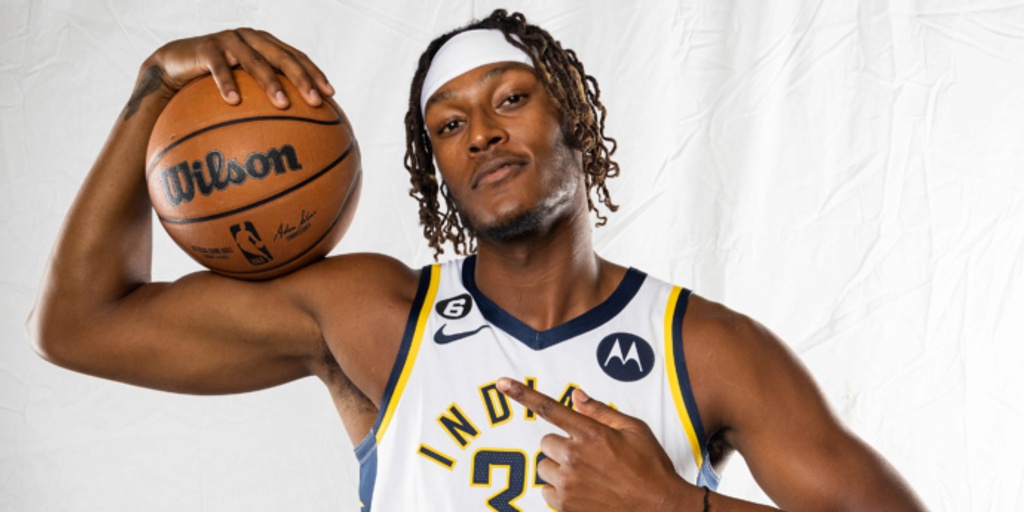 When Indiana Pacers trade rumors have popped up throughout recent seasons, Myles Turner's name has been a mainstay in those reports. Since 2018, when the awkward front court pairing between Turner and Domantas Sabonis began, the former lottery pick had been cast aside as the apparent odd man out. However, after years of surfacing in trade rumors, Turner is still on the Pacers' roster.

This past offseason, though, the feeling was completely different for Indiana’s starting center.

Not only was Turner the subject of more rumors — including legitimate negotiations with the Los Angeles Lakers for a potential salary-dump deal for Russell Westbrook — he saw the organization openly flirt with the best free agent available at his position. Turner watched as the Pacers aggressively pursued restricted-free-agent Deandre Ayton, which ultimately led to a signed max offer sheet. Although the Phoenix Suns quickly matched Indiana’s offer sheet (the largest contract negotiated in franchise history), Turner knew at that point they were actively trying to find an upgrade.

During Media Day on Monday, Turner addressed the consistent rumors and failed Ayton pursuit by Indiana.

“This is the only time I will be addressing it this year; I want to make sure everyone knows that,” Turner said. “Yeah, elephant in the room. For me, this is my eighth season. I’ve been in trade rumors the past four or five years. It’s something that I know I’m numb to. It’s something that... it’s just whatever comes with this business. There are no hard feelings in his business. You have to take the emotions out of everything, and I’ve learned that at a young age, and I still hold true to that. My job is to come in here and help these young guys now, man.”

Turner took the high road there — no surprise for someone tactful and professional like the former Texas Longhorn. When asked about a potential contract extension still being on the table, Turner didn’t want to elaborate. Pacers president of basketball operations Kevin Pritchard echoed a similar tune regarding Turner’s murky future with the organization last Thursday.

“I sat down and talked with Myles for an hour, hour-and-a-half the other day. It was a heart-to-heart,” Pritchard told Basketball News last week. “I don’t want to tell you exactly what was said, but I’ll give you the crux, and that is I think he’s super excited about playing with Tyrese [Haliburton]. I think he wants to play the 5 exclusively. I think he wants to be a defensive monster. And I think that he’s okay planting deep roots here. But, you know, he’s going to be a free agent next year. There’s a lot of things that can happen. What we think today isn’t something that we know is going to happen tomorrow. This is the most dynamic business in the world.”

Turner enters the 2022-23 season in Indiana not only as a veteran voice for a young locker room, but with plenty of motivation to silence the critics. Playing with another high-usage big for years, Turner feels he’s never really had the opportunity to showcase his entire two-way skillset. Even after the seismic Sabonis trade in February, which helped steer the Indiana's direction altogether by acquiring Tyrese Haliburton, Turner never logged a minute with the rising star due to a stress reaction in his left foot suffered a few weeks prior.

“I don’t think I’ve scratched the surface of my potential,” Turner said. “I gotta let my play do the talking. I could sit here and promise y’all things… but I’m going to go out there and hoop, man. That’s what it’s all about.”

Already known as one of the Association’s best rim protectors, averaging an eye-opening 2.8 blocks per game over the past four seasons, Turner is enthused about the idea of finally having the system cater to what he hopes is a full-fledged breakout campaign. The 6-foot-11 big set a career-high in scoring in 2018-19, with 13.3 points in 28.6 minutes per game. With no Sabonis and a roster in dire need of his abilities on both ends of the court, however long it may last, Turner could see his numbers spike.

Entering a contract year doesn’t bother him. As he put it on Monday, Turner thrives within those types of environments. Also, Turner openly acknowledged a thought that had crossed his mind ahead of another Media Day: Would he still be in Indiana or elsewhere?

“That’s a good question,” Turner said. “I think that the way the past offseason had played out, you can only go off your past experiences. And I’ve been in a Pacers uniform, so I can clearly say yeah, I was.”

When Turner went down for the remainder of the regular season, Indiana’s defense fell off a cliff. Over the final 39 games without Turner, Indiana ranked last in defensive rating, allowing a ghastly 120.9 points per 100 possessions. Before Turner was sidelined, the Pacers checked in 10.5 points better at 110.4 points per 100 possessions (which ranked No. 21 in the NBA).

Turner will be an integral piece to the Pacers' overall identity early on this season. Haliburton is now the proverbial face of the franchise, taking on a leadership role alongside expectations of flirting with an All-Star berth. However, Turner’s fit alongside Haliburton as pick-and-roll/pop option, to go with his anchoring ability on the defensive end, could help set the tone for the organization.

Pacers head coach Rick Carlisle returned to Indiana expecting to coach a team that would consistently be within the Eastern Conference’s top eight teams. The strong pivot in the other direction hasn’t fazed Carlisle, potentially even reinvigorating him with players seeking out his knowledge of the game. As it relates to Turner, Carlisle has put an emphasis on making the veteran feel welcomed after the failed pursuit of Ayton.

“I’ve been talking to Myles ever since July, ever since the stuff where we put the offer sheet on [Deandre] Ayton,” Carlisle said. “Got to spend time, a couple of days, with him at his basketball camp in Dallas in late July. Spent some time with him in August in the gym. Lloyd [Pierce] came down for a few days the following week. We spent a couple more days in the gym, had dinner at my house in Dallas.

Turner will be a member of the Pacers at least through the start of the regular season, but there are no assurances beyond that. Indiana will be put in a tough position with Turner during the final year of his contract. Jalen Smith and Isaiah Jackson, two key young frontcourt pieces who have long-term potential in Indiana, need to play as much as possible. And with Turner’s nagging injury history, how much will the organization be willing to put on his motivated shoulders from now until February’s trade deadline?

With the way Turner’s tenure in Indiana has gone, one thing is for certain: Rumors will pick up steam once more as the calender inches closer to a final resolution.