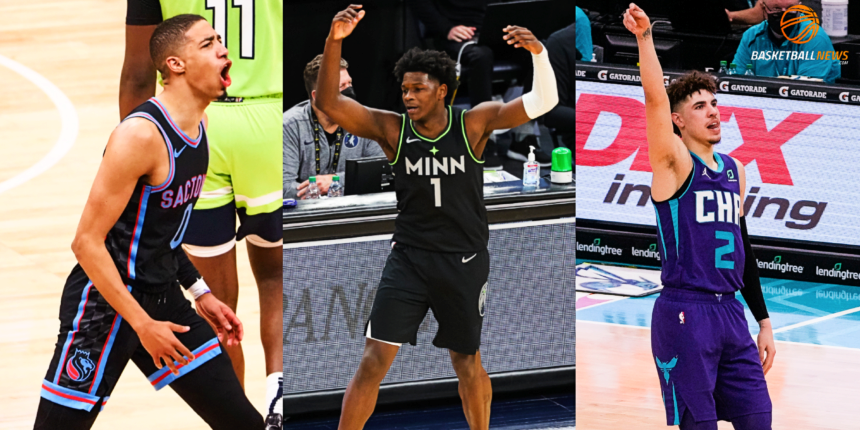 Babcock: Anthony Edwards is my pick for NBA Rookie of the Year

Since the 2020-21 NBA regular season has ended, I’d like to make my personal pick for the 2020-21 NBA Rookie of the Year and provide analysis on the three top rookies that are in consideration:

Okay, I don’t think anyone is all that surprised that Anthony Edwards, the No. 1 pick in the 2020 NBA Draft, is in consideration for Rookie of the Year. He finished this past season leading all rookies in scoring, averaging 19.3 points per game. It wasn’t a situation where it was all easy breezy for Edwards from the start though; he had his growing pains, just like most rookies.

For one, Edwards didn’t even make a start for the Minnesota Timberwolves until the 18th game into the season. For months, he was inefficient and inconsistent, shooting low percentages from the field. It seemed as if with every big scoring game he’d have, he also had a game where he was hardly effective at all. Although he showed flashes of greatness for most of the season, it seemed like LaMelo Ball was the sure-fire pick for Rookie of the Year. However, things changed in March. Ball went down with an injury, and Edwards began bringing his A-game every night.

On March 18, Edwards had a career-high 42 points versus the Phoenix Suns, a mark that he matched again in May versus Memphis. He also increased his consistency, being a reliable scorer night-in and night-out. Edwards teased me with his scoring upside and star potential during his freshman season at Georgia, most notably when I watched him score 33 points in the second half at the Maui Invational versus Michigan State, but he was very inconsistent. I thought he was the right pick for the Timberwolves, but I had concerns. His shot selection, motor and just overall consistency needed to be addressed. He has certainly kicked things into gear early on in his career, and it's looking like a star has been born. The scary thing for the rest of the NBA is, I think he has a lot of room for growth. To me, Anthony Edwards should win the 2021 NBA Rookie of the Year Award.

I never denied LaMelo Ball’s star potential, but like many, I questioned his maturity and motor, among other things, prior to the 2020 draft. Ball began his first season by coming off the bench for the Charlotte Hornets, with a seemingly tight leash, but he played well, nonetheless. In the month of February, he looked like a bona fide star, as he averaged 20.1 points, 6.2 rebound and 6.7 assists, putting on a show night after night, executing dazzling passes and making remarkable plays left and right.

Before injuring his wrist in March, Ball looked like a lock to be the Rookie of the Year. I still think the concerns with Ball before the draft were valid, at the time, but I’ll give credit where credit is due, and he did a terrific job of addressing everyone’s issues and improving as a player. If LaMelo hadn’t missed so many games this past season due to injury, it would have made this a much harder decision. Regardless of who wins Rookie of the Year, I don’t think anyone would disagree that the NBA added two great players in Edwards and Ball.

I liked Tyrese Haliburton going into the 2020 NBA Draft, but I surely didn’t see him stepping into the league and being as effective as he was this past season. Although his shooting mechanics are a bit unorthodox, I totally bought in on him as a shooter. Also, who didn’t love his passing ability, basketball IQ,and overall feel for the game? On the flip side, I was concerned with his lack of physicality and his ability to get by defenders off the dribble, and I questioned if he could be a primary point guard in the NBA. Of course, Haliburton was selected No. 12 overall by the Sacramento Kings, and I think it was a perfect fit. They already had star point guard De’Aaron Fox at the helm, which allowed Halliburton to play on and off the ball without much pressure, utlizing him for his strengths and limiting his weaknesses from being exploited.

I still see Haliburton being best utilized as a secondary ball-handler rather than as a primary point, but I’ll admit it: I underestimated Tyrese Haliburton. I don’t think he’s on the same level as Ball and Edwards, but Haliburton is a good NBA player in his own right. I fully expect him to have a long and successful NBA career.

The 2020 NBA pre-draft process was a strange one, but I enjoyed evaluating all of the prospects and getting to know many of them prior to their draft. Many labeled the 2020 draft class as a “bad” one. I think Edwards, Ball and Haliburton are proof that was not the case. I also think there will be a number of other players from this rookie class that will make some noise in the following years as they continue to develop and are provided more favorable opportunities.

Although I have turned the page to this year’s NBA Draft, I certainly look forward to continuing to follow the players’ careers from last year throughout their professional careers.

Who's next in line? Matt Babcock's 2021 NBA Mock Draft is live on BasketballNews.com.