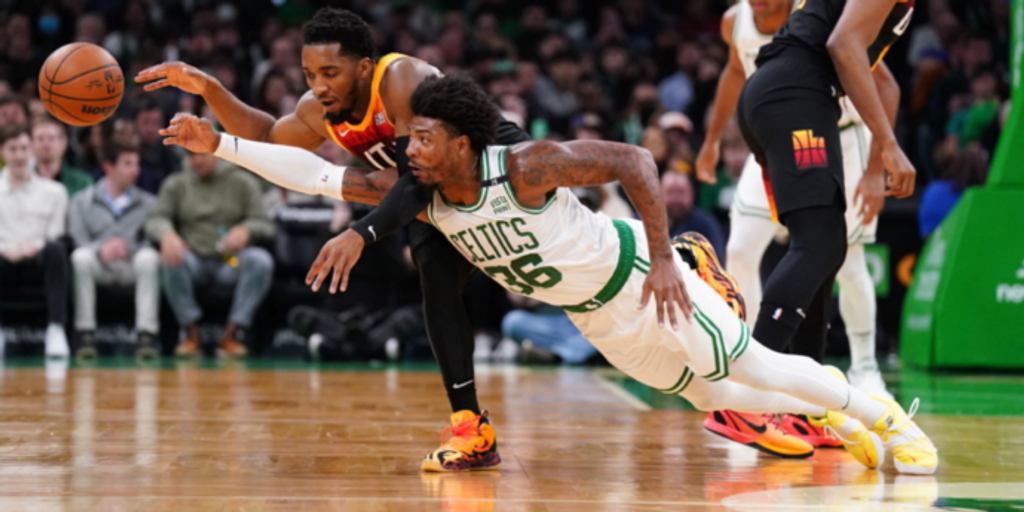 Give Marcus Smart the damn Defensive Player of the Year award

Here’s a short list of NBA players who were born since the last time a guard won Defensive Player of the Year: Devin Booker, Dejounte Murray, Donovan Mitchell, Jaylen Brown, Bam Adebayo and Brandon Ingram. Hold that thought — you can bet your life savings we’ll get back to it.

We can do the heavy analytical dissection, but if we’re being honest, advanced metrics haven’t appropriately caught up to or captured how we watch defense, specifically on the perimeter.

This isn’t going to be anti-film or anti-analytics; it's just that, sometimes, you gotta throw that sh** out the window and just make your points. You should still sound reasonable and informative while doing it — not just hot-taking for the sake of it — but even Kevin Durant famously said, “Who the f*** wants to look at graphs while having a hoops convo?” While many of you might not agree, there’s at least a time and place to put this into practice. Now’s that time.

The Boston Celtics were 25-25 on the morning of Saturday, Jan. 29. It was the day Marc Gasol turned 37, the day a number of us experienced a Nor’easter and the day the C's beat the New Orleans Pelicans 107-97. Boston got a combined 69 points from Jayson Tatum and Jaylen Brown. Some would call it a nice win.

But that day also marked the beginning of what is now a two-month Celtics run of Oscar-smacking the piss out of teams, riding a record of 47-29 ahead of their showing Wednesday night against the Miami Heat — another Eastern Conference contender.

Oh yeah, we generally weren’t calling Boston a contender two months ago — some weren’t positive the team would totally avoid the Play-In Tournament. If you’re keeping score at home, the Celtics have won 22 of their last 26, holding opponents under 100 points (in this NBA) 12 times — almost half of the time — and winning 15 of those games by 10 or more points.

The Celtics, right now, have the league’s best defense. They’ll experience some drop-off with Robert Williams out due to a torn meniscus, and even if we do see him again this season, he’ll likely be less than 100%. That’s unfortunate, but Boston should still be elite on that end, especially on the perimeter.

In 2022, we’d like to think we’re too sophisticated to use opposing points per game, but it bares mentioning that the C’s are first in the league, allowing just 104.0 points per game. They’re also first in Defensive Rating at 105.9.

Basic stuff, right? Yeah, I know. But if you keep going through defensive metrics, you’ll find the Celtics at or near the top of many key statistics.

Now, go and look at Marcus Smart’s Basketball-Reference page, and we’ll be here when you get back...

Did you know Smart has only been on an All-Defensive Team twice in his eight-year career? Surely, we can expect a third appearance this season, but still... that’s it? (Note: Yes, this is also a case for three All-Defensive Teams for those of us who value that 50% of the game.)

When were those two All-Defensive years? The 2018-19 and 2019-20 seasons, where Smart cracked the First Team in back-to-back campaigns. We’ve lauded his defense for years, and rightfully so. He’s one of the best perimeter defenders you may have ever seen — definitely over the last 10 years. Advanced numbers don’t always benefit perimeter defenders; in fact, they favor bigs all the time.

🗣 Marcus Smart is the DPOY pic.twitter.com/XVJFmYKbn2

Smart’s been amazing on defense this year. He’s been as good as anyone on the perimeter, but even so, he’s only 20th in DRTG, per Basketball-Reference. Wanna guess the positional breakdown of the 19 ahead of him?

There are nine centers, and six guys who play power forward. All but one, Jae Crowder, are considered bigs. Only three are considered guards: Chris Paul, De’Anthony Melton and Luka Dončić. Would you say any of them, as good as they’ve been, have been better than Smart defensively this year with a straight face?

(By the way, Smart is fourth on his own freaking team behind Williams [first], Al Horford [fourth] and Tatum [15th] somehow.)

Smart’s tied for 11th in Defensive Box Plus-Minus. Wanna play the positional breakdown game again? No need. Only one guard is ahead of him, and that’s Paul, who’s on the best team in the league — the rest all play the 3, 4 or 5— especially the latter two.

Defensive Win Shares? Smart’s 12th. Wanna do it again? All bigs except for Dončić and his teammate Tatum, who actually leads the league.

This isn’t to say that these metrics (and ones that are alike) have been the only thing to influence voting throughout the DPOY award’s history, but the award itself basically crowns whoever voters think is the best defensive big man. Sometimes you can crunch numbers, other times you can compare charts, but all in all, you still need to watch the m*****f*****. From there, it’d be nice to recondition your thinking so we don’t wind up in the same place all the time.

No guard has won DPOY since 1995-96, and that was Gary Payton — one of the best to ever do it. The most recent guard before Payton was Michael Jordan in 1988. That’s two guards that have won DPOY since Mike Conley was born, and he’ll turn 35 in October.

We don’t even need to do the positional breakdown. We can do it like this: the last non-big to win DPOY was Kawhi Leonard in 2016 — the second season of back-to-back award wins. The last non-big before him? Ron Artest in 2004. And before that? Payton in ’96, then Jordan in ’88.

That’s five DPOY Awards to non-bigs over the last 34 seasons, not including this year, where I’m bracing for the voters to give it to Rudy Gobert a fourth time.

Smart’s awesome, but even just on principle, just give the award to a (insert expletive here) guard. This is a guard- and wing-driven league offensively and Smart defends all those dudes, putting the clamps on several — and he's done this since being drafted in 2014. He’s the best perimeter defender — arguably best, period — on the league’s best defensive team. As the longest-tenured Celtic since 2017, this team has taken on his identity. Without Smart — even with Williams, Tatum, Brown, Horford and Derrick White — the Celtics wouldn’t be this. His point-of-attack defense, switchability and leadership are immeasurable.

And to the voters — y’all are media members, many of whom grew up admiring the Celtics (let’s keep it real, it’s why we haven’t stopped hearing about this run since it began) — so you know Smart’s been as good as anyone. And if you’re not going to give it to Mikal Bridges for his awesome work defensively on the NBA’s best team, or Bam Adebayo for being the most versatile clamper in the league (games missed don’t matter), then give it to Smart.

He’s earning it, he’s deserving of it, and y’all just need to do something different.