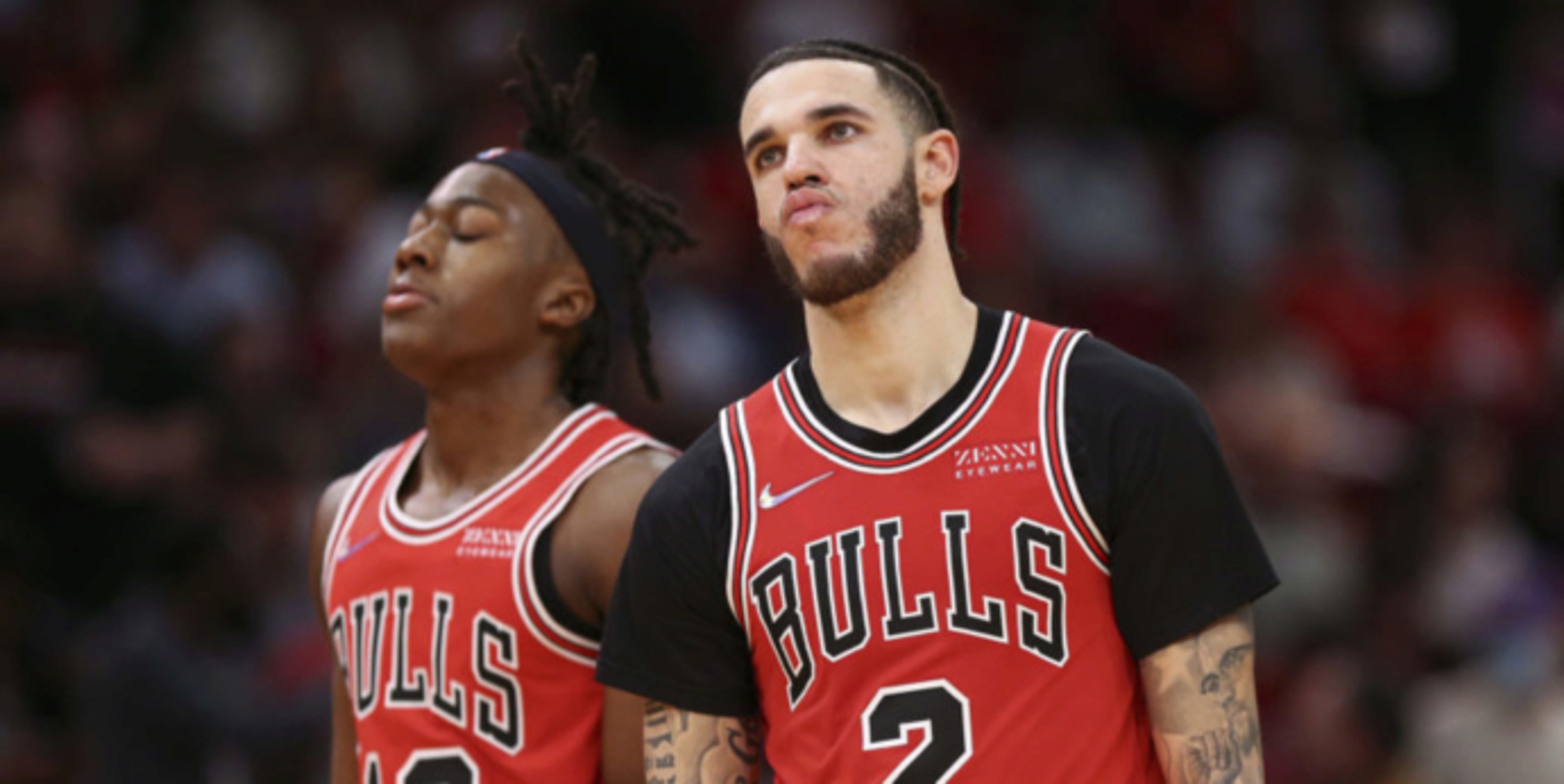 Where the Bulls should turn with Lonzo Ball getting knee surgery

But, as is consistent with the rest of the season, a seemingly major injury has afflicted one of the NBA’s aspiring contenders, and now that we’re officially beyond the halfway point of the season, everything matters that much more.

The Athletic's Shams Charania reported early Thursday that Lonzo Ball has a small meniscus tear in his left knee. Hours later, the Chicago Bulls confirmed the injury, relaying that Lonzo will undergo arthroscopic surgery with a recovery period of 6-to-8 weeks.

The Bulls are already missing Zach LaVine due to a left knee bone contusion, which will keep him out a least a few more games. And while that’s a short-term injury, Chicago suddenly has a thinning roster.

Patrick Williams is expected to be out for the season with a dislocated wrist. Derrick Jones Jr. may be out another month with a bone-bruised knee suffered last week. Javonte Green is still working his way back from a strained groin.

Alex Caruso just returned after a month absence due to a mixture of leg, hamstring, and COVID issues, and even so, they’re still very shorthanded at 28-15.

People are already throwing the Bulls around in trade rumors. Should they ask the Toronto Raptors about Goran Dragić? Would Caris LeVert coming from the Indiana Pacers be a helpful fit? Does acquiring Josh Hart from the New Orleans Pelicans make sense? Could they get any of the 6-foot-3 scoring guards from the Portland Trail Blazers not named Damian Lillard?

The Bulls do have usable salaries to pair, like Jones' $9.7 million, Williams’ $7.4 million and Coby White’s $5.8 million. They also have draft picks, including all of their own first-rounders after 2023 and a collection of second-rounders.

But we’ve seen other contenders elsewhere not behave erratically and trust their own guys, at least in the interim. In the own-conference contender bubble, the Brooklyn Nets have turned to guys like Kessler Edwards, Day’Ron Sharpe, Cam Thomas and David Duke Jr. at different points, all of whom were a part of the 2021 draft class (though, Duke went undrafted and is on a two-way contract).

And, tied with Chicago, the Miami Heat have risen to the top of the East despite Jimmy Butler, Bam Adebayo and Kyle Lowry having only played 14 games together this season. How’s that possible? Just guys stepping up when called upon: Tyler Herro, PJ Tucker, Max Strus, Caleb Martin (a two-way), Gabe Vincent, Dewayne Dedmon and Ömer Yurtseven.

Ball's obviously going to be a difficult replacement because of what he means to Chicago. His perimeter defense is elite, which is an especially deadly pairing when logging minutes next to Caruso. He's also developed into a sniper from deep, hitting 42.3% of his triples this season, the best of his career. And as the starting point guard, logging 34.6 minutes per contest, Ball is posting 13.0 points, 5.4 rebounds, 5.1 assists and 1.8 steals per contest.

He's also accounting for a career-best .101 win shares per 48 minutes and is second in box plus-minus on the team behind Zach LaVine, and his 108 defensive rating ties Caruso for the best among Bulls guards. In no world is this level of two-way production easy to replace, moreso when it comes from your starting point guard.

For the Bulls though, as opposed to making any drastic changes, why not just use what you have? The aforementioned White is turning 22 years old next month, and lately, has been productive in his expanded role since returning from COVID protocols in December. In 16 games — and eight starts since Dec. 19 — White’s averaged 16.4 points, and 3.1 assists on 50/45/86 shooting splits. In his last 11 games, he’s up to 17.7 points and 3.0 assists per contest while slashing 54/51/91.

In other respects, the Bulls have turned to second-round rookie Ayo Dosunmu. Dosunmu, who just turned 22 on Jan. 17, was an All-American at Illinois, a national championship favorite last season before losing to Loyola-Chicago in the NCAA Tournament's Round of 32.

A 6-foot-5 shooting guard, Dosunmu is averaging 7.2 points while shooting 55.4% from the field and 45.7% from three in 21.3 minutes per game. He's also providing adequate defense, as expected when he was drafted at No. 38 overall.

Dosunmu is only at 1.7 assists per game, but has shown more playmaking ability across his last three outings, his best spurt as a rookie. Dosunmu’s averaged 18.0 points, 8.0 assists, 5.7 rebounds and 2.0 steals per game over that stretch, shooting 76.7% from the floor and 70.0% from deep on 10.0 overall attempts per game. Continuing to unlock Dosunmu might be the best option for Chicago in the immediate.

Dosumu, at least for now, could give you the spacing, playmaking and point-of-attack defense needed until Ball comes back. He won’t be what Ball is consistently, but it’ll be close enough for now without having to create mass roster upheaval.

The Heat are excellent at player development, but if you’re the Bulls, you have to view what they’re doing with undrafted talent and think you could sustainably get more-than-adequate production from your talented second-round draft pick in a similar fashion.