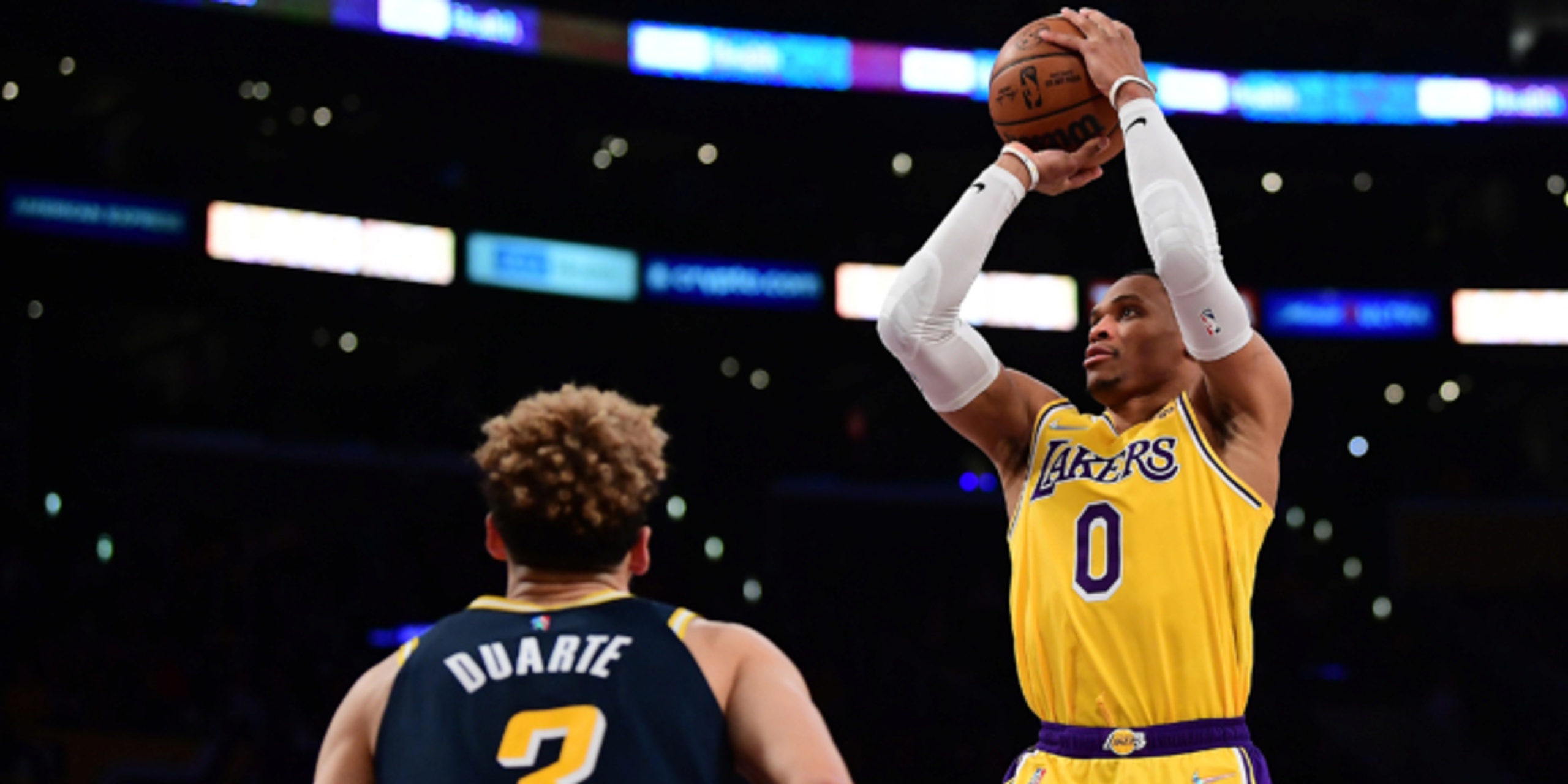 Lakers would be foolish to reject Pacers' offer for Russell Westbrook

As currently constructed, the Los Angeles Lakers are nowhere closer to escaping the hole they dug for themselves last offseason. While injuries played a part in their struggles, it’s fair to say that the Russell Westbrook experiment couldn't have gone much worse. Westbrook struggled to blend off-ball alongside LeBron James, and his fit was immediately clunky.

Lakers head coach Darvin Ham has been saying all of the right things, discussing how he could get the most out of Westbrook and stressing that there's plenty of blame to go around for last year. Meanwhile, the front office continues to explore possible Westbrook trades.

According to The Athletic’s Bob Kravitz, the Indiana Pacers recently rejected an offer from the Lakers that would have sent Myles Turner and Buddy Hield to Los Angeles in exchange for Westbrook, a 2027 first-round pick and multiple second-rounders. Indiana is reportedly ready to accept if the Lakers include their 2029 first-round selection as well. Los Angeles hasn't been willing to do so, which is why talks are currently at a standstill.

For both sides, these negotiation tactics make sense. There’s absolutely no reason for the Pacers to help the Lakers, especially if they're only receiving one pick to take on Westbrook’s $47.2 million salary for 2022-23. Holding out for both the 2027 and 2029 picks with little to no protections would be a fair haul for both Hield and Turner while absorbing an albatross expiring.

Los Angeles is stuck in a Westbrook bind, and it seems they have three remaining options: run it back, hold out for Kyrie Irving, or pull off this win-now deal with the Pacers. At least the Indiana deal would bring back two starters to place alongside LeBron and Anthony Davis.

Some might argue that the trio of James, Davis and Westbrook only played 21 games together, so we haven't seen enough to properly evaluate this group. However, it’s fairly apparent that this core isn’t good enough to challenge most of the Western Conference’s elite teams. Westbrook was unable to function as a secondary option more often than not, and now he'll turn 34 years old in November. Not to mention, the West will likely be tougher than ever — with teams like the Los Angeles Clippers and Denver Nuggets finally getting healthy and several up-and-coming squads expected to take a leap forward as well.

Earlier this month, Westbrook parted ways with his longtime agent, Thad Foucher, which set off alarm bells. Foucher had represented Westbrook throughout the entirety of his NBA career, helping him earn $291,756,333 from his NBA contracts alone. Why would they split up now? Well, Foucher didn’t mince words in a written statement to ESPN’s Adrian Wojnarowski, citing "irreconcilable differences" regarding the direction of Westbrook's career.

“Now, with a possibility of a fourth trade in four years, the marketplace is telling the Lakers they must add additional value with Russell in any trade scenario. And even then, such a trade may require Russell to immediately move on from the new team via buyout," Foucher explained. "My belief is that this type of transaction only serves to diminish Russell’s value and his best option is to stay with the Lakers, embrace the starting role and support that Darvin Ham publicly offered.”

Less than a week after Foucher’s eye-opening remarks, trade winds began to pick up again around the future Hall-of-Fame point guard. There was also the Summer League awkwardness, where James and Westbrook sat on opposite sides of the arena and didn't interract with one another. Reading the tea leaves, it sure feels like Westbrook's days with the Lakers are numbered.

Based on Kravitz’s intel from Indiana, the deal between the Lakers and Pacers would be “done tomorrow” if an additional pick is offered alongside Westbrook. The Brooklyn Nets don't seem to be in any rush to move Kevin Durant or Irving — with some NBA executives predicting that both players will be in Brooklyn when the 2022-23 season begins — so this Indiana trade may be the Lakers' only other option to significantly improve their title odds for next season.

As Foucher laid out, the marketplace is telling the Lakers all they need to know right now about extracting peak value in a potential Westbrook trade. It may seem like the Lakers are “losing” this deal based off of asset accommodation alone, but what are the alternatives? In order to move off of Westbrook's contract and bring back key contributors, the Lakers must include both first-round picks. Think of it like this: One first-rounder is to get Indiana to take on the Westbrook contract, and the other is to acquire Turner and Hield. 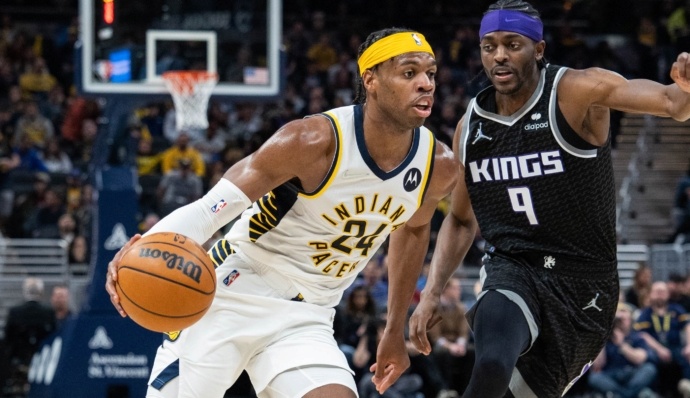 Honestly, based off that viewpoint, Indiana’s angle seems more than fair. It’s been impossible for Los Angeles to find a willing taker for Westbrook, and the Pacers are ready to take on his salary while also relinquishing two key contributors who are certainly worth a future first-round pick.

Acquiring Hield and Turner would be an instant game-changer for the Lakers’ postseason aspirations and a win on several levels. Hield is a talented sharpshooter who would thrive in the Lakers' system, hitting open looks in the corner or while running off perimeter actions. Thanks to the gravity provided by James and Davis, Hield would consistently feast from the perimeter. The 29-year-old would be the team's best outside shooter, and the Lakers’ roster is in dire need of perimeter weapons. Hield fills a need, and his salary would only be on their books through the 2023-24 campaign.

Turner has had trouble staying healthy, but he's been extremely productive when he's available. Turner has proven that he’s one of the best rim protectors in basketball, averaging 2.5 blocks over the last four seasons. Paired next to Davis, who is more comfortable playing the 4, Turner’s defense and floor-spacing acumen would provide a balanced frontcourt attack. Only 26 years old, Turner could become a long-term fixture alongside Davis in the frontcourt, as the Lakers would own his Bird rights going forward.

The Lakers’ biggest needs are three-point shooting and defensive versatility. Hield and Turner would emphatically check both boxes, and their projected rotation certainly looks more appealing.

As evidence by the larger bench mob, this deal would provide Los Angeles with instant relief — consolidating a deeper rotation. Losing Westbrook is a net-positive in this situation, because Hield and Turner help address needs while allowing LeBron to run the show as pseudo-point guard.

How exactly should the Lakers and Pacers meet in the middle in these trade talks? If the Lakers are balking on including an unprotected first-round pick in 2029, would the Pacers relent on protections possibly up to top-8? Would Indiana be willing to toss in veteran playmaker TJ McConnell to push this pick into unprotected territory? Packaging McConnell with Hield and Tuner would make this three-for-one deal a nearly identical salary match.

Indiana is the rare team that would feel comfortable taking on the Westbrook contract, simply because he would never suit up for them. Armed with $31 million in cap space after their failed pursuit of Phoenix Suns center Deandre Ayton, the Pacers can easily absorb Westbrook’s salary. And as they tear the roster down to its foundation and rebuild around Tyrese Haliburton and No. 6 overall pick Bennedict Mathurin, Indiana is nowhere close to competing for a playoff spot. Allowing Hield and Turner the opportunity to play on a title contender also opens up more playing time for prioritized members of their young core like Chris Duarte and Isaiah Jackson.

Looking ahead to next offseason, the Pacers project to have over $70 million in cap space if they move Hield’s contract. Also, like the Utah Jazz, Indiana is currently slated to have at least three first-round picks in the 2023 NBA Draft. Moving Turner and Hield for picks could also help Indiana in the tank race for Victor Wembanyama and Scoot Henderson. With some lottery luck, they could land one of these potential superstars and usher in the next great era of Pacers basketball.

If the Pacers traded Turner and Hield for Westbrook (and then bought him out), they would have the perfect lineup for developing their young guys — and tanking.

Indiana is in the perfect spot to be aggressive when it comes to salary dumps. With cap flexibility over the next two summers until Haliburton is due for a massive pay raise, the Pacers can continue to stockpile future assets and kick the can down the road as their young core continues to develop together. This trade for Westbrook is a prime example where Indiana can take advantage, because those first-round picks from Los Angeles could be very valuable down the road.

Talks between the Lakers and Pacers have stalled, so it remains to be seen whether negotiations will pick back up. The next steps will be critical in order to re-ignite this potential pathway for offloading Westbrook.

It’s a tough pill to swallow for Westbrook and the Lakers, but he’s a negative asset at this stage of his illustrious career. The best course of action seems to be finally ending this marriage, and the rebuilding Pacers provide the ideal launchpad to change direction for good.