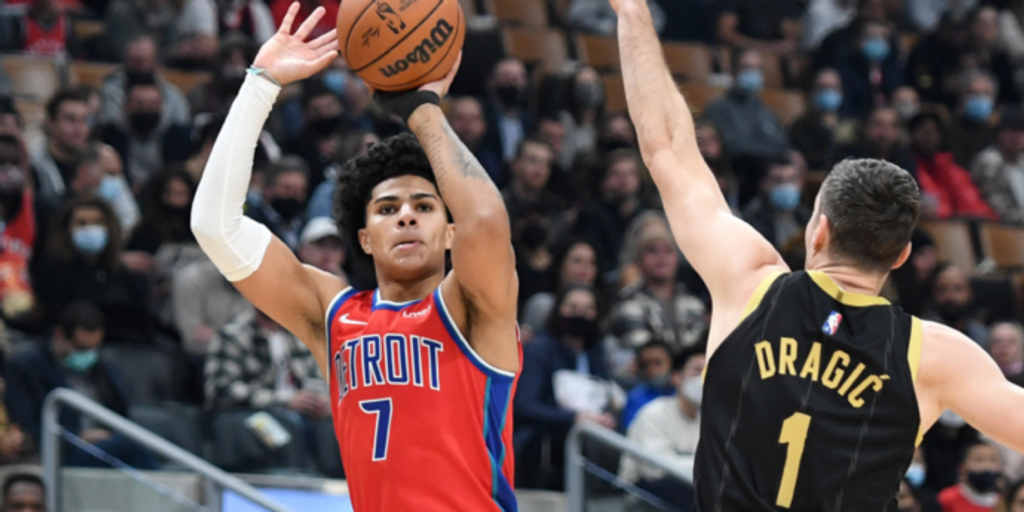 Killian Hayes is finding his way by playing off Cade Cunningham

The Detroit Pistons have questions to answer.

It's a natural place for a rebuilding team to be in. When operating from the ground up, you have to

2) Ideally find other young talent to complement and grow with that piece.

3) Find veterans who can help foster that development.

The Pistons hope to have Their Guy in Cade Cunningham, the first overall pick in the 2021 NBA Draft. They have other young pieces like Isaiah Stewart and Saddiq Bey. Jerami Grant and the currently-injured Kelly Olynyk serve as the best help-them-grow veterans who can handle high usage when called upon.

Falling by the wayside — or at the very least, a guy that runs the risk of fading — is Killian Hayes, the No. 7 pick of the 2020 draft. He was an upside pick — a lead guard prospect with size, feel and vision who needed on-ball nurturing. His rookie campaign was cut short due to injury. His second season coincides with the arrival of Cunningham, who's had to deal with his own injury woes to begin his career.

The challenge for Detroit? Trying to find a way to maximize both of their ball-handling investments.

The early plan — exhibited during summer league and the early portion of the regular season — was Hayes running the show. Cunningham still got plenty of opportunity to initiate actions, but he started a significant share of possessions off the ball. That led to some mixed results, with Hayes' limitations as a finisher and pull-up shooter shining through against set defenses.

There's been a shift in usage over the past four games between Cunningham and Hayes. That shines through statistically:

With Hayes off the ball more, he's had to find other avenues for success. That starts with his jumper, one that's been pretty darn reliable with his feet set.

On the season, he's shooting 40.7% on catch-and-shoot triples. Over his last four games, that number is hovering around 42%. He's done most of his damage from the corners this season; 41.2% of his attempted threes have come from the corner, and he's drilled half of them, per Basketball-Reference.

Movement shooting remains an issue for Hayes at this stage. He's still working through his footwork — setting up shop after relocating is a bit of an adventure right now.

There's still value to be had with Hayes on the move. Something the Pistons have tinkered with is having him set (or ghost) a screen for a bigger ball-handler. They've been rare occurences, but you can see the uncomfortable position it places a defense in.

Hayes clearly has things to sort through offensively, but he'll earn time to figure it out due to his work on the defensive end. He leads the Pistons in steals (1.5) and deflections (3.1). Beyond the event creation, he's done a solid job of navigating screens and staying attached to ball-handlers.

It might be too early to completely rule out Hayes becoming a worthy ball-handler, but it's clear the Pistons are inclined to hand those duties to Cunningham. With that, it's encouraging that Hayes is finding ways to be impactful without the ball in his hands.

A 6-foot-5 guard that can knock down catch-and-shoots at a high level, make plays against scrambling defenses and defend both guard spots on the other end sounds like a valuable player.

It may not be what the Pistons (or their fans) envisioned when they drafted him, but it'd be a solid outcome if it holds.