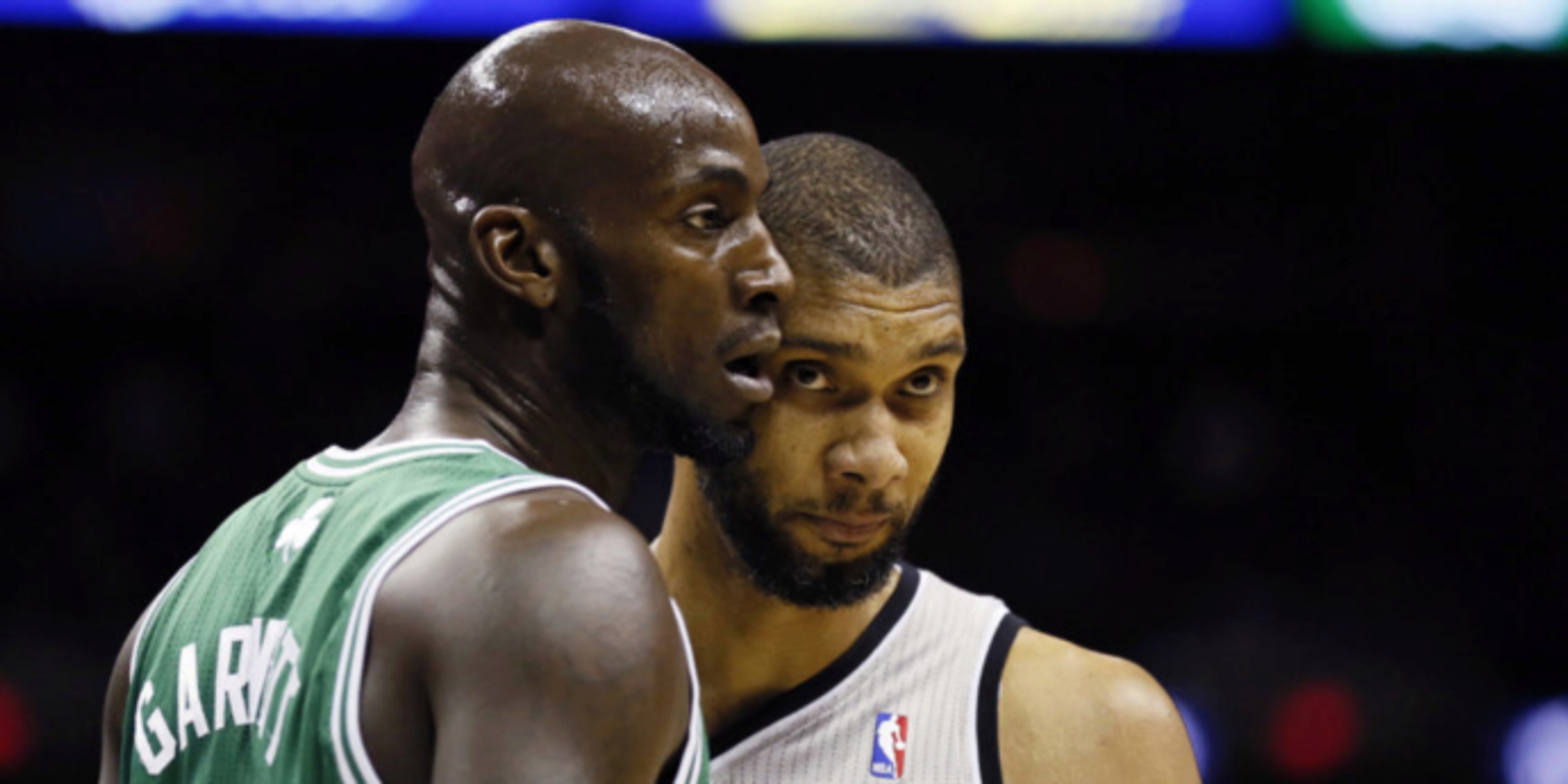 Tim Duncan and Kevin Garnett embodied what it means to be a true professional and an ultimate NBA royalty as their careers intertwined with each other throughout the almost two decades they both spent in the NBA. Garnett had tremendous respect for Duncan, which he outlined in his new book.
Garnett details what made him and Duncan similar.

If you were a kid watching the NBA in the late ’90s and throughout the entire 2000’s, Kevin Garnett or Tim Duncan were probably one of the two players you regularly watched. They both came to the NBA at almost the same time and immediately made their impact felt around the league. It didn’t take them long to become top-10 players in the league, which is a status they kept for most of their careers.

They had some great battles in the regular season and the playoffs, with Duncan coming on top the majority of times simply because he had better players around him with the Spurs. That changed for Garnett after he joined the Boston Celtics, but for the more significant part of their careers, Duncan was luckier because he was with the Spurs, which had a great system in place with an amazing supporting cast.

In his new autobiography, Garnett talks about the dynamic of their relationship and what actually made them similar rather than different. Most fans viewed them like totally two different personalities, which they obviously were, but Garnett wanted to emphasize all the similarities between them that ushered tremendous mutual respect.

"Timmy is Mr.Hyde to my Dr.Jekyll," he said. "We were opposites in so many ways. I skipped college. He stayed at Wake Forest all four years. I was loud. He was quiet. I played with furious energy. He played with calm, collectedness. And yet, we were more similar than we were different. He played 19 seasons. I played 21. We both valued loyalty and stability. And what we shared most was the way we were humble students of the game. Like Timmy, I put in the work. His work ethic was incredible. So were his moves. Damn tough dude to guard. All his finesse. The way he could back you down or face you up, do those jab steps and feints, swing the ball low and dare you to reach, take you off the dribble or kiss it off the glass, or flip-up that baby hook."

Garnett was a fierce trash -talker who used to throw his opponents out of their games by talking all types of smack to them. Apparently, that never fazed Duncan, who seemed immune to that, despite Garnett giving his best to get inside his game. When he learned Duncan was not responding, he got mad because there was nothing he could do anymore. Tim Duncan was playing mind games with him instead, and Garnett admits that sit well with him at all.

"Over all those years, we played against each other more than fifty times, and every one felt special," he said. "He always forced me to play at my highest level. Unfortunately, that hype could work against me. I’d be talking all my shit, and where it would psych out most players, it only locked Timmy tighter. He fed off it. That pissed me off. I’d be spending all this energy trying to get him off his game; I wouldn’t realize that he’d gotten me off mine."

Many fans believe that if Garnett had the same type of supporting cast and a coach like Gregg Popovich throughout his entire career, he would have the same number of NBA championships under his resume. Whether that is true or not is impossible to answer, but the reality is that for over a decade, Garnett was stuck with the Timberwolves, hoping for them to surround him with enough great players to make that extra step in the playoffs. That didn’t happen, so he found his happiness in Boston, where he immediately won a championship and had a few deep playoff runs with the Celtics. Duncan spent his entire career in the playoffs, winning 5 championships and being extremely close to winning at least a few more.

It’s great to hear a different perspective on their relationship and how Garnett actually views Duncan. The respect between the two was always there, which is essential when talking about two of the greatest power forwards ever to play the game.