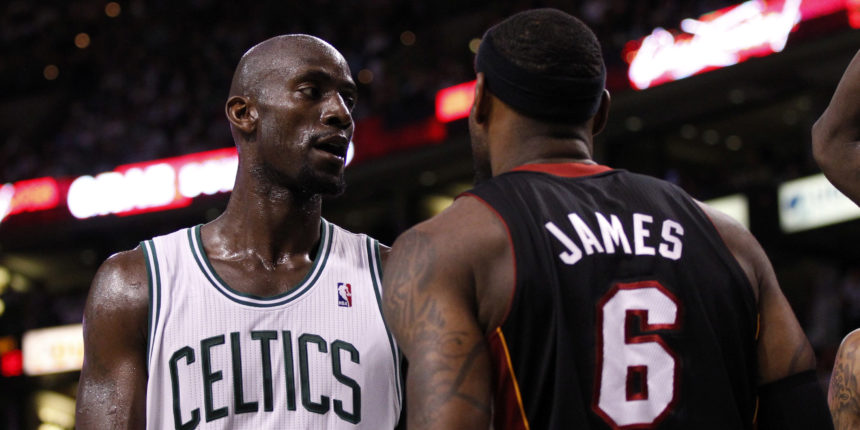 Kevin Garnett has a 'different level of respect' for LeBron, Jordan

Kevin Garnett’s documentary, "Anything Is Possible," debuted Friday on Showtime, and it was a treat.

The doc captures everything, from draft night to Garnett winning his only NBA championship with the Celtics. Intertwined with stories about playing against the all-time greats, dealing with controversies, plus the plethora of behind-the-scenes anecdotes, "Anything Is Possible" is Garnett’s way of closing one book and allowing a different interest of his to take over.

This is a guy who came to the NBA in 1995 and retired in 2016. From the Bulls' dynasty to the Kobe-Shaq Lakers to Steph Curry’s three-point revolution, Garnett has been through it all. And throughout the entire 21 seasons, no one could match his intensity. Now he's is ready to verbalize those experiences. And he started even before the release of the documentary.

Garnett is one of the few who crossed paths with both Michael Jordan and LeBron James. During the interview with GQ, he talked about the differences between the two.

KG’s words are similar to how Kobe’s peers felt about him during his playing days. People respect all-time greats, but they feared Black Mamba. The same goes for MJ, even to a greater extent.

Despite the indisputable talent, LeBron never had that divine aura about him. That’s why players who weren’t on the same level as him — KG included — were more inclined to mock him, especially early in his career.

That doesn’t mean players don’t respect James, but he isn’t in the same category as the two aforementioned all-time greats. KG, however, gave LeBron a huge credit for one thing.

"You’ve gotta have that in you to be able to have those shoulders to carry it," Garnett said. "No man is perfect in this sh*t, and there ain’t no telltale book on how to do this sh*t. He’s done a great f***ing job. I just felt like it was only right to give him that respect."

It’s refreshing to hear someone talk about MJ and LeBron without initiating the GOAT debate. It’s even better to hear someone of KG’s stature speak about the two. Whether you agree with him or not, you know it’s coming from the heart. And that’s all we can ask from him — there’s no doubt we’ll get the same thing from "Anything Is Possible."

All praise due to the Point God: Chris Paul is at it again
yesterday
MORE:
NBA News

Anthony Davis rips 7-6 Lakers: 'A championship team? Not us right now'
Nothing But Bets: NBA Projections for 11/13/21
