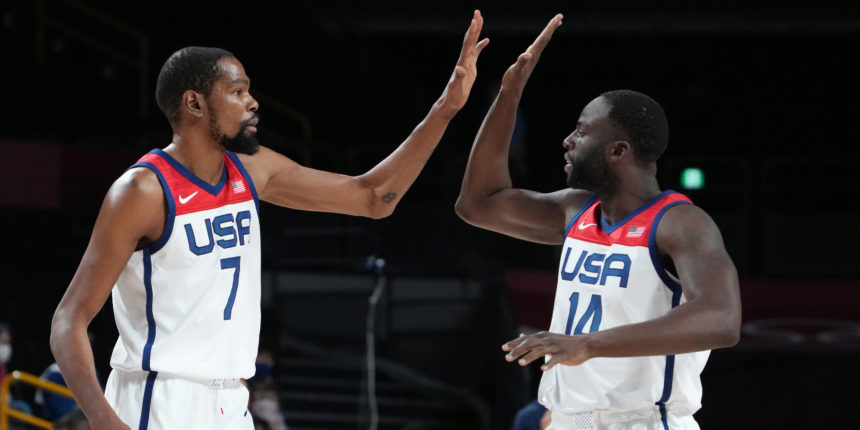 That was the main takeaway from both Draymond Green and Kevin Durant in the inaugural episode of CHIPS, a Bleacher Report show hosted by Green. “They” being Golden State Warriors coach Steve Kerr and owner Bob Myers, and “it” being the Bay Area dynasty.

Green hosted his former teammate Durant to discuss their time together in Golden State. And while they covered a number of topics, they provided a new and interesting explanation for why the Warriors disbanded – and it wasn’t their on-court confrontation.

Durant and Green had several run-ins in their three seasons as teammates. Durant is legitimately one of the greatest players to ever play in the NBA – and everything we know about the best players in this game would indicate that they’re all competitive. Green, too, is a hyper-competitive and outspoken player. Neither is shy about speaking his mind, so butting heads was inevitable.

Their most aggressive public feud took place in Los Angeles in a game against the Clippers in November 2018. Green held (and ultimately lost) the ball on a potentially game-winning possession, which resulted in a minutes-long exchange on the Warriors bench between the two.

There was already speculation about Durant leaving the Warriors prior to the dust-up in question; after the fight, it was assumed to be a done deal. And that assumption became a reality, as Durant left Golden State to team up with Kyrie Irving in Brooklyn the following offseason.

In the 24-minute-long episode, Green directly asked if he was to blame for Durant’s departure.

“It wasn’t the argument,” Durant said. “It was the way that everyone… Steve Kerr acted like it didn’t happen. Bob Myers tried to just discipline you and think that that would just put the mask over everything.

“I really felt like that was such a big situation for us as a group,” Durant continued. ”(It was the) the first time we went through something like that. We had to get that sh*t all out. I remember watching The Last Dance and when Scottie [Pippen] didn’t go into the game, the whole team, in the locker room, said Scottie that was f**ked up that you did that. We needed that.”

So, there’s a new narrative about Durant, Green and the Warriors – do we believe it? While the two agree that Kerr’s inactivity and Myers’ punitive actions played a larger role in the team breaking up, Durant previously confirmed the role Green played in his departure, and it contradicts the message from their recent sit-down.

In an Oct. 2019 appearance on ESPN’s First Take, Durant confirmed that the fight did in fact play a role in his departure. When specifically asked about the fight’s role in his leaving, Durant replied, “For sure, I’m not gonna lie about it.”

But it’s worth noting that Durant appeared hesitant to relive the confrontation with Green. It’s possible that he simply didn’t want to explore it. Durant’s a savvy businessman, and he understands the impact of confirming a rumor to the media, so feeding that narrative to the media was a major mistake if it was untrue.

However, in that same interview, Durant willingly elaborated on the main reasons for his departure – namely, an aging Warriors’ roster and the impending challenges of re-signing all major contributors. Maybe he was simply brushing past an uncomfortable topic that he wished would go away. And when it didn’t, his displeasure toward the media probably grew.

Durant addressed his relationship with the media in his conversation with Green, too, revealing disappointment with it after learning that members aren’t as knowledgeable as he assumed.

“I felt like the media knew more than me,” Durant said.

“(But) some of the questions, they didn’t seem so intelligent to me anymore,” Durant continued. “…This game is simple to me, so some of the stuff that y’all asking doesn’t move me the way it used to.”

Durant is clearly resentful of the media, which could be partially due to how he was covered in (and on his way out of) Golden State. We’ll never know for sure exactly how Durant felt about Green following the November 2018 incident and how much of a role it played in his departure, but that’s fine. Durant’s feelings about the confrontation seem to have changed, and that’s fine, too – after all, time heals all wounds.

But Durant and Green clearly maintain a strong rapport, so it’s fair to assume that the relationship was never as toxic as it was reported to be. And while Durant might be hard on the media at times, his issues with the media are probably valid.

He does know more. Snap judgments are made and stuck by. And some articles are written for views.

But for Durant’s peace of mind, he should try to land on a more amicable way to interact with the media. The news cycle moves quickly. Other things will inevitably happen involving Durant resulting in major stories. He can react one of two ways — either be a part of shaping future narratives, or narratives can be shaped about him.

Regardless, the stories will run.

The Heat have a big-big problem on their hands
Now