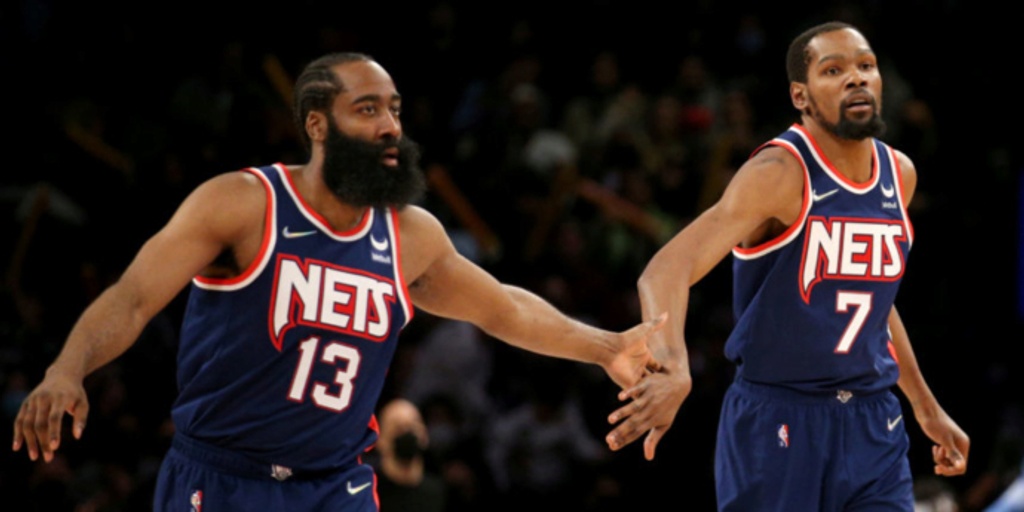 Kevin Durant approved James Harden trade: 'He knew it was over'

In an in-depth article by Bleacher Report's Jake Fischer, he revealed that Kevin Durant ultimately had final approval on opening up James Harden trade efforts.

"KD didn't want to get rid of James," a source told Fischer. "But he knew it was over."

Fischer writes that Durant ultimately called Brooklyn Nets GM Sean Marks to push forward a trade after months of tension. Per the story, Durant was the main proponent of bringing Kyrie Irving back to play in away games despite his unvaccinated status and home ineligibility. Harden was frustrated by Irving and his decision.

Back in training camp, Durant was also disappointed that Harden came in "poor conditioning," and Harden was vocal about desires to test free agency.

"Kevin and James had a cold war going for the last several months that made everyone miserable," a source said to Fischer.

Multiple times this season, Harden would leave the Nets between gamedays to return to Houston, according to Fischer. The trade finally felt inevitable after he showed little effort in his last contests with the team.

The story also says that the 76ers had gotten involved in Harden trade talks with the Rockets mere weeks into Daryl Morey's new start as president of basketball operations last season. Morey has a relationship with Harden after the two were together on the Rockets.

Fischer writes, "Several teams believe the NBA should investigate Philadelphia's contact with Harden and his representatives."

It remains to be seen what the full fallout of this blockbuster trade will look like, but it is undoubtedly one of the dominant storylines as the season flips over the All-Star break.