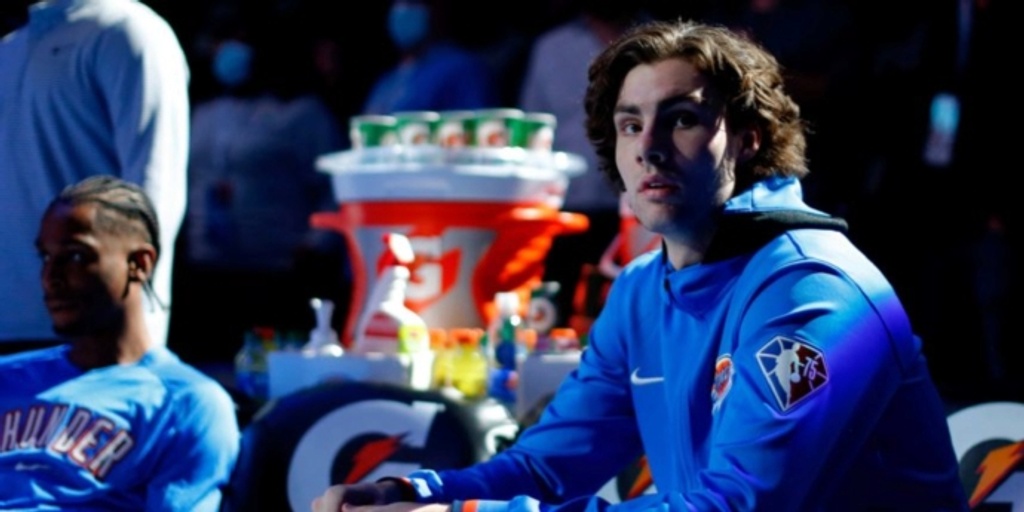 The Oklahoma City Thunder played their cards close to the vest when they selected Josh Giddey at No. 6 overall in the 2021 NBA Draft. As GM Sam Presti explained after drafting Giddey, he first discovered the 19-year-old Australian point-forward while quarantining during the G League Bubble. Locked in his hotel room, Presti endlessly flowed through tape on Giddey and fell in love with him as a prospect. It turned a lot of heads and draft night, but Oklahoma City felt very comfortable with their intel on Giddey and his potential upside.

“I went down to the G League Bubble this year and we had to quarantine. And I was down there with our Blue team,” Presti said after the 2021 draft. “So, I had four days to sit in my room and that was the first time I really dug into a lot of his film. By the time I left my room, I had a pretty good feel for (Giddey), I think, because I piled up a bunch of games when I sat in there.”

As of late, Giddey has proven to be not only one of the best prospects with early returns from this year’s draft class, but his tantalizing ceiling continues to show up more consistently. Heading into the All-Star break, Giddey has recorded three triple-doubles in a row. Giddey only needs one more triple-double to break Luka Doncic’s record for most by a player under age-20.

Oklahoma City was always an ideal scenario for Giddey, mainly because he can have a full-on focus for his player development in an environment where they know plenty of work is still to be done. Winning is not the priority for the Thunder right now, and that’s totally okay because Giddey’s recent play is a positive all by itself, overcoming the immediate on-court win-loss total.

During his rookie campaign, Giddey is averaging 12.4 points, 7.8 rebounds and 6.4 assists. The efficiency numbers are definitely cringe-worthy at a measly 47.8 True Shooting percentage, but the 6’8” Australian’s recent surge is showing true signs of growth for an Oklahoma City team needing another promising player alongside Shai Gilgeous-Alexander long-term.

Speaking of Gilgeous-Alexander, he’s missed the Thunder’s last 11 games with an ankle injury heading into the All-Star break. In the meantime, Giddey has taken on a bigger role and began to show real untapped potential as an all-around offensive fulcrum. Giddey averaged 16.1 points, 9.1 rebounds and 7.3 assists on a 52.4 TS% as the Thunder slid into the break as a real contender to chase for the No. 1 overall pick.

The one very promising note on this latest stretch of play from Giddey revolves around his usage and overall efficiency as a scorer. Before Jan. 28, when SGA went down with his ankle injury giving the offensive keys to Giddey, the rookie’s TS% was at 46.3% on a 21.2% usage. Since taking over as the Thunder’s primary option, Giddey’s usage rate jumped 2.9% while his True Shooting percentage climbed from 46.3 to 52.4.

It’s going to take awhile for Giddey to hit his potentially perennial All-Star ceiling, but what’s happening lately has to give Thunder fans hope this long standing, creative rebuild attempt from Presti will pay off soon enough.

Giddey at this point in time looks like a steal for the Thunder. Creating an ultra unique backcourt with Gilgeous-Alexander, Giddey brings a nice changeup of funkiness and creativity within the flow of an offense. Giddey is simply an aesthetically more pleasing player when he’s running the show.

Where Giddey lacks in overall speed and athleticism, he certainly won’t pop during games as an off-the-ground guard, the Aussie makes up for it with innately high basketball IQ and maestro abilities running a coach’s system. Giddey makes pocket-passes pop up out of nowhere. He can set up the corner pocket pass with precision by manipulating defenders with his eyes to open up the dishing lane.

The swing skill set for Giddey will ultimately be his floor-spacing acumen. Shooting only 26.7% on threes, Giddey’s penultimate outcome as a prospect seems capped. However, in Oklahoma City, he’s becoming insulated by SGA’s All-Star-level scoring and versatility, plus the fireball off the bench in rookie combo guard Tre Mann as well. Looking down the road a few years, Giddey as the set-up man for the Thunder’s offense with plenty of shooting and defensive versatility surrounding him sounds like a winning recipe. Incredibly enough, over OKC’s last 11 games, they are a plus-point team with Giddey on the court (0.1 NetRtg).

If Giddey is able to find a consistent shooting stroke within the next few years, his ceiling seems way up there for star-level modern guards. If the last three games are any indication, Giddey could be a triple-double machine soon enough. That type of player brings winning value instantly, making an organization more comfortable placing him within the "untouchable" tier. Gilgeous-Alexander is already there, but Giddey might be joining him, if he hasn't already.

Nobody knew how long this rebuild attempt from Presti in Oklahoma City would truly last. Would it go longer than the failed attempts in Phoenix with Ryan McDonough and Philadelphia with Sam Hinkie? That firm is still unknown, but the timeline is starting to form together a little bit for the Thunder.

Gilgeous-Alexander already raised the Thunder to at least a competitively competent team when he’s on the court. Giddey’s recent ascension adds another piece to the puzzle for the Thunder, laying out when exactly they could jump and push that war chest of future draft capital in for a win-now star play.

Oklahoma City slots in at No. 4 in the reverse standings, which is right at the cut-off mark for the consensus top four prospects on BasketballNews’ Big Board: Jabari Smith (Auburn), Paolo Banchero (Duke), Jaden Ivey (Purdue), Chet Holmgren (Gonzaga). If the Thunder stay within that range come draft night, they add another blue chip talent to the pool of an already strong bunch forming.

The upward trajectory of Giddey has me rightfully giddy to see him and Gilgeous-Alexander share the floor once again after the All-Star break. If this backcourt can show real winning promise over the final stretch of games for OKC, we could finally be seeing the arrow point up for the organization after a decade-long stretch of sustained playoff appearances beforehand.

Looking to go to the hottest concerts, sports, theater & family shows near you? Get 100% guaranteed tickets to more than 125,000 live events from TicketSmarter, the official ticket marketplace of BasketballNews.com. Order online now!.