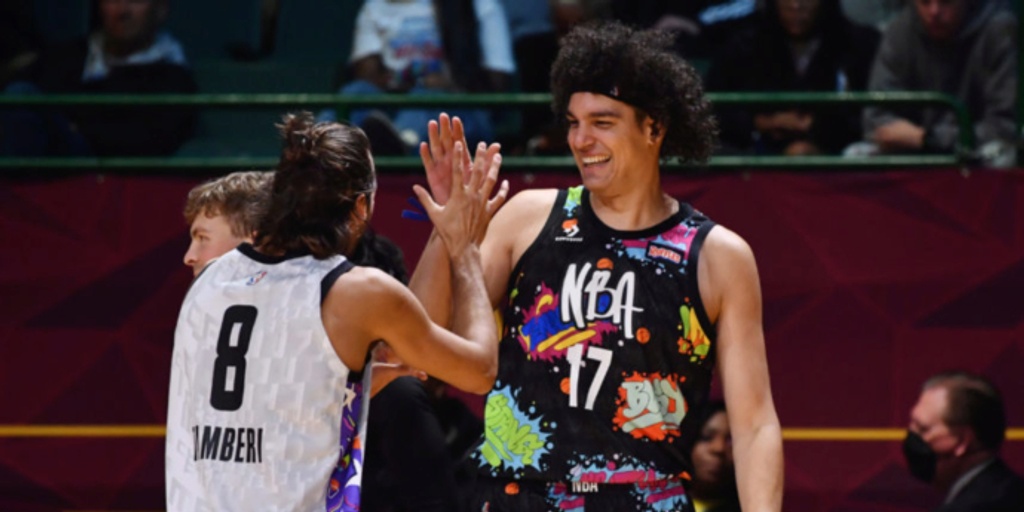 Friday Fun: Takeaways from the first day of All-Star Weekend

All-Star Weekend is a godsend, man.

A 55-60 game schedule across four months is monstrous for everyone involved: the players and coaches, the fans living and dying with every result ... and the people covering the sport.

At a basic level, it feels good to wind down for a bit. Turn your brain off for a bit. All-Star Weekend festivities provide us with a nice middle ground; we get low stakes competition where the mission statement is "look at how freaking cool our league is."

I love the way the league handles its opening night. We get former players coaching a bunch of celebrities in the world's wealthiest (and cringeworthy) pickup game. After that, they showcase the up-and-comers in the league in ... yet another pick-up game. At least in this case, we get some real late game juice from the young studs — especially with the introduction of a new target-score-based format.

I have some takeaways from Friday's festivities, but I'll get the most important one out of the way now: I had a lot of fun.

And that's what really matters, right? It's so easy to get caught up in the minutiae over the regular season. Wins and losses, scheme stuff, injury maintenance, transaction talk. It was honestly cool to watch (bad, at times) basketball and just bask in the ambience of the world's best sport.

(This is not an invitation to argue. Be wrong in your own space.)

Here are some things that stood out to me.

MYLES GARRETT IS A MASSIVE HUMAN BEING

While it's generally understood that professional athletes are abnormal humans (in a positive sense), you still come across a few that bend the realm of what should be possible. Garrett is one of those dudes, an electrifying defensive end for the Cleveland Browns listed at 6-foot-4, 272 pounds.

Guys his size aren't supposed to move as well as he does. That blend of size, athleticism and fluidity makes him one of the best linemen in the sport — seriously, line him up inside or outside and he can absolutely blow up your game plan — but it seems unfair that he can also serve as a terrifying transition threat on the basketball court.

Though his team ultimately lost the Celebrity All-Star Game, Garrett popped on the screen all night. He was a Drummond-esque bully on the glass, a vertical spacer you had to account for in the half-court, and a dunk-happy hooper whenever he got the chance.

What the heck do you do with a refrigerator-with-hops flipping the angle of a screen, then rumbling down the lane like this?

You get out of the way, like the defense does here. Or you just go full Dearica Hamby:

Garrett didn't show much in the way of shooting touch or passing chops, but he also didn't need to.

We all knew Harlow had at least an interest in basketball; within that realm, his relationship with Tyler Herro begins to make more sense. I'll leave that up for your interpretation.

But to watch Harlow shooting in for boards, knocking down four-point shots (yeah, that was a thing) and keeping the ball moving in the half-court was ... honestly satisfying? A pleasant surprise? There were a few audible "...huh." exclamations in the Duncan household on Friday night.

You know what every low-stakes, full-court pick-up game has?

You know how you take advantage of shoddy transition defense?

Well, you cherry-pick pass the ball ahead and generate easy buckets. Harlow was doing that in spades.

I'll give him the hat tip.

You can nestle in more Garrett talk here, but I want to hone in on the Rising Stars event.

First off, well done on the format. Two games to 50, and a final with a 25 target score. I was a bit iffy on 50 as a target score — the possibility of things going too quickly or dragging on too long was in the back of my mind — but it turned out to be a solid sweet spot.

Beyond that, let's talk about Team Barry.

Having Cade Cunningham, Evan Mobley, Franz Wagner and Jae'Sean Tate is a gnarly blend of size and IQ. It's cliche, but all of those dudes just know how to play basketball. Quick processors, sound decision-makers, spatial awareness on both ends of the floor, all of that.

But man, can all of these dudes just abuse mismatches.

Even on missed shots, it was wild to watch Mobley put his shoulder into his defender's chest on post-ups. Poor Bones Hyland (Team Payton) was fighting for his life when defending drives. Tate was a bowling ball on drives, or when fighting for rebounds. We got this very early on into the Cade-versus-LaMelo Ball battle:

I'm just not sure what you're supposed to do with that. All of the positioning in the world only goes so far when you can be moved off your spot. Team Barry didn't have watch-your-ankles shot creators, but they didn't need 'em — they had enough get-to-my-spot guys to make the offense work when it mattered.

Let's get the obvious stuff out of the way first. Scottie Barnes has rightfully flowed between 1-and-4 in the Rookie of the Year race, depending on when you check in. He's a star in the making. Precious Achiuwa, the key prospect in the Kyle Lowry sign-and-trade from this summer, has shown some darn good stuff defensively this year. Raptor fans should be (and are) excited about what's being built up there.

With that said, they gave us some hilarious moments on Friday night.

We'll start with Barnes (and Tyrese Maxey, to be fair), who completely bombed during the Clutch Moment event.

But also, how wholesome are these two?

Tyrese Maxey and Scottie Barnes kept it positive during the #CloroxClutch Challenge! 😊 pic.twitter.com/xdpeb4FEmF

And then there's Achiuwa, who played with his usual brand of energy on both ends. He also tapped into his I'm-a-big-wing-not-a-big bag at the worst possible time.

Attack your goals with the confidence of Achiuwa, and you're much more likely to achieve them.

Looking to go to the hottest concerts, sports, theater & family shows near you? Get 100% guaranteed tickets to more than 125,000 live events from TicketSmarter, the official ticket marketplace of BasketballNews.com. Order online now!.