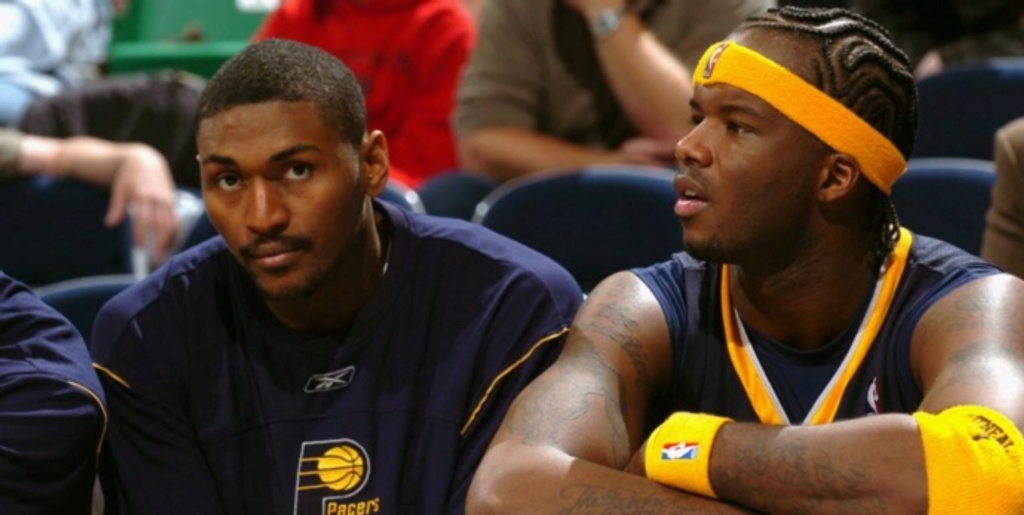 Watching the documentary “Untold: The Malice At The Palace” that premiered on Netflix on Aug. 10, it’s apparent that there was quite a bit of tension between Jermaine O’Neal and Metta World Peace (who went by Ron Artest at the time) following the Malice at the Palace.

The relationship between O’Neal and World Peace was already strained prior to the brawl, and it only got worse afterwards. Apparently, the friction intensified even more when Metta asked for a trade from the Indiana Pacers after the Malice at the Palace. O’Neal revealed that he wasn’t happy to see World Peace win a championship with the Los Angeles Lakers, and viewers left the documentary with many questions about their relationship.

Is there still a rift between O’Neal and World Peace today?

I interviewed O’Neal on my show, "The Rematch," and we broached this topic. He explained the tension and expressed a tremendous amount of regret – not for having his teammate’s back during the brawl, but for not fully understanding everything that World Peace had been dealing with for a long time.

Etan Thomas: “I want to shift gears a little bit and ask you about Metta World Peace. I was watching ‘All The Smoke’ and you told Matt Barnes and Stephen Jackson that y'all have spoken recently. You sat down at the BIG3 and you had a chance to talk. I was so happy to hear that because I know that y'all weren't on good terms for a while and there was a lot of friction. But that’s great, that you sat down and spoke. Talk to me about that reconciliation process?”

Jermaine O'Neal: “Man, it was something that was much-needed. We all wish we knew back then what we know now – when we were at 23, 24 years old. I went through a process in Portland where it was like fight, fight, fight, fight, fight for everything, for every inch, [for] every minute. I wasn't playing, so I had to keep showing my worth. I went through that for four years. Through that process, I went to two Conference Finals, right? So I saw it, I understood what to do and what not to do. So, I felt like when I left there, it was only about one thing: Win, win, win, win. Right? That's it. Just show people who you are. Because I felt slighted for four-straight years by not getting a consistent opportunity. So, when I got [to Indiana], it was like, I wasn't really trying to hear nothing but, 'Hey, let's come in here and work.’ And I was young, I was 24 years old. I did not know anything about mental health. You know this like I know it, if you were speaking about mental health back then, it was devastating to you, because nobody was educated about it. If you heard someone needs help with mental health, you'd say, ‘Oh, he crazy.’”

Jermaine O'Neal: “You wouldn’t want to put ‘career’ and ‘crazy’ together in the same sentence because [you wouldn’t] have any longevity in that particular sport. I think the Pacers did a really good job on holding it together. I’d try over and over and over and over to reach out, ‘Hey, Ron, let's go to dinner.’ It was always, ‘Ron, let's do this.’ And then finally, he kept saying, ‘No.’ And then he kept wanting us to quit [asking]. And I was like, ‘Wait. Does he not like me? Or does he not like the team? Does he not want to be here?’ And it started to eat at me, like a virus. And bro, I just was so angry all the time with him, because he would call press conferences in the parking lot somewhere and we're getting the information when the media is getting the information – or even, in many cases, after the media. There was no conversation amongst the players with him saying, ‘Hey, I feel this way.’ And so I did not know how to handle that.

“And as a brother, as a teammate, we're together all the time. You spend a lot of time with each other in the locker rooms and everywhere else, planes, bus rides. And I wish that I knew more [about mental health] because if I knew more, then my aggression towards him doesn't expedite his anxiety or his dislike – whether it was [about] me or being on the team or that basketball environment. He just was like, ‘I'm not messing with you.’ We just play, and then after that, boom: no conversation. And I think it's important for people to know that when we shot the doc, we shot it separately. The only conversation I had with him about the doc was the initial conversation of, ‘Hey, this is what I'm looking to do. It's a Netflix deal. All I need you guys to do is just be open and candid about how you viewed it.’ But we never saw each other at any point during the filming of that doc."

Jermaine O'Neal: “Yeah, we shot it separately. So, when I saw him describe his process of that night – his counting to five, how he had to really take things in. Not only did it put a lot of perspective on that night – and how, when Ben Wallace pushed him, that started his process. So he then goes to lay down right away because he's trying to get himself together, right? Ben throws the headbands, wristbands at him. Now, it takes him up to level two. Now, the water is boiling at this point, and you see the bubbles are about to boil out of the pot. And he had jumped up and he told me, ‘You better get him!’ He kept saying, ‘You better get him!’ And he laid back down. Then, when the cup came, it was like number three, and that was the most heightened level. And I understood it. It made complete sense to me.

"But what it also did is put into perspective how he handled things as a teammate on a regular basis. When things got tight, in its most intense form – whether it's our level of communication to each other or in games – [this is how he would think]. Like, I remember we were in Memphis and we didn't have a good game and Coach was yelling or whatever; he went in and he knocked over the heating pads that they would put in the hot water. He knocked it over and it damn near got on everybody, and people are jumping out of the way because it's piping hot water! We've seen [his] reactions – breaking the camera in New York coming through the tunnel, right? And it all was like a flashback. And I’m like, ‘Damn, he's been trying to handle this forever.’ And while we're worrying about wins and losses, he's worried about how he's going to handle his life daily.”

Jermaine O’Neal: “And so I felt a certain way when I saw that and I thought… We've talked multiple times before and especially after the doc about different things. But shoutout to Ron – I can't call him Metta – for being so open and honest and vulnerable. Because we know the media and public opinion can be cruel sometimes. So, I had to say that, man, because that meant everything to me. Actually, and I also didn't know what he said when he won the championship and he was on the court with Steve Smith and all of them.”

Etan Thomas: “Yeah, I remember seeing that live. In case anybody didn’t see it, the first thing that he did after winning the championship with the Lakers – before he answered any questions – was talk about you guys. He said he was supposed to win a championship with that Pacers team and that he had so many regrets about how it all went down and that he felt like a coward because he left Indiana. And he’s saying all of this on live TV right after they won the championship!"

Jermaine O'Neal: “I never saw that. Somebody told me, but I was so mad with him, I didn't want to see nothing, hear nothing, nuh uh! Like, when I did the doc, I said, ‘I wasn't happy that he won no championship! I was mad as hell!’ Like, ‘After what he did with us, why would he get to win it and I don't have one?’ Even at that point, I wasn't mature enough to understand what this man was going through.”

Etan Thomas: “Wow. When I saw him say that stuff after winning the championship, I realized, ‘Wow, he was really hurt by this.’ He acknowledged that he didn’t handle certain situations well, but he also said that he didn’t know how to handle those situations and it’s something that he was working through. And that’s the mental health part that was non-existent in the NBA until, really, just a few years ago.”

Jermaine O'Neal: “Yeah. And I gotta say this: People, when we hear ‘mental health,’ that is so wide-ranging. I mean, I'm watching myself over 17 years having mental-health issues. That doesn't mean I have the same mental-health issue as Ron or any person that deals with it at that level. But it's more of emotional distress or a level of sadness about something. We just watched Naomi Osaka go through that now – her process from the Olympics. I watched her yesterday on television doing an interview and she broke down crying."

Etan Thomas: “Right, because of what happened in Haiti.”

Jermaine O'Neal: “Yeah, it was about Haiti. And it's just people, we've got to understand what that is. We're all vulnerable to mental-health issues, just some people's severity is more significant than others.”

Etan Thomas: “Right. But I was really glad to see that y'all went back and started talking again. I’m really happy about that. I remember when he laid on the scorer’s table and was trying to calm himself down, a lot of the discussion was about that and so many people didn't understand what was happening. With mental health, people just didn't get it – and they're just now starting to understand or attempting to understand it. We're not robots; we have things we deal with like everyone else. We have different emotions that we have to figure out how to manage. That was the problem for so long: so many in society looked at us as robots or as video-game characters – like they just start the game and we just play and that was it, there were no feelings or anything like that. And that's just not reality.”