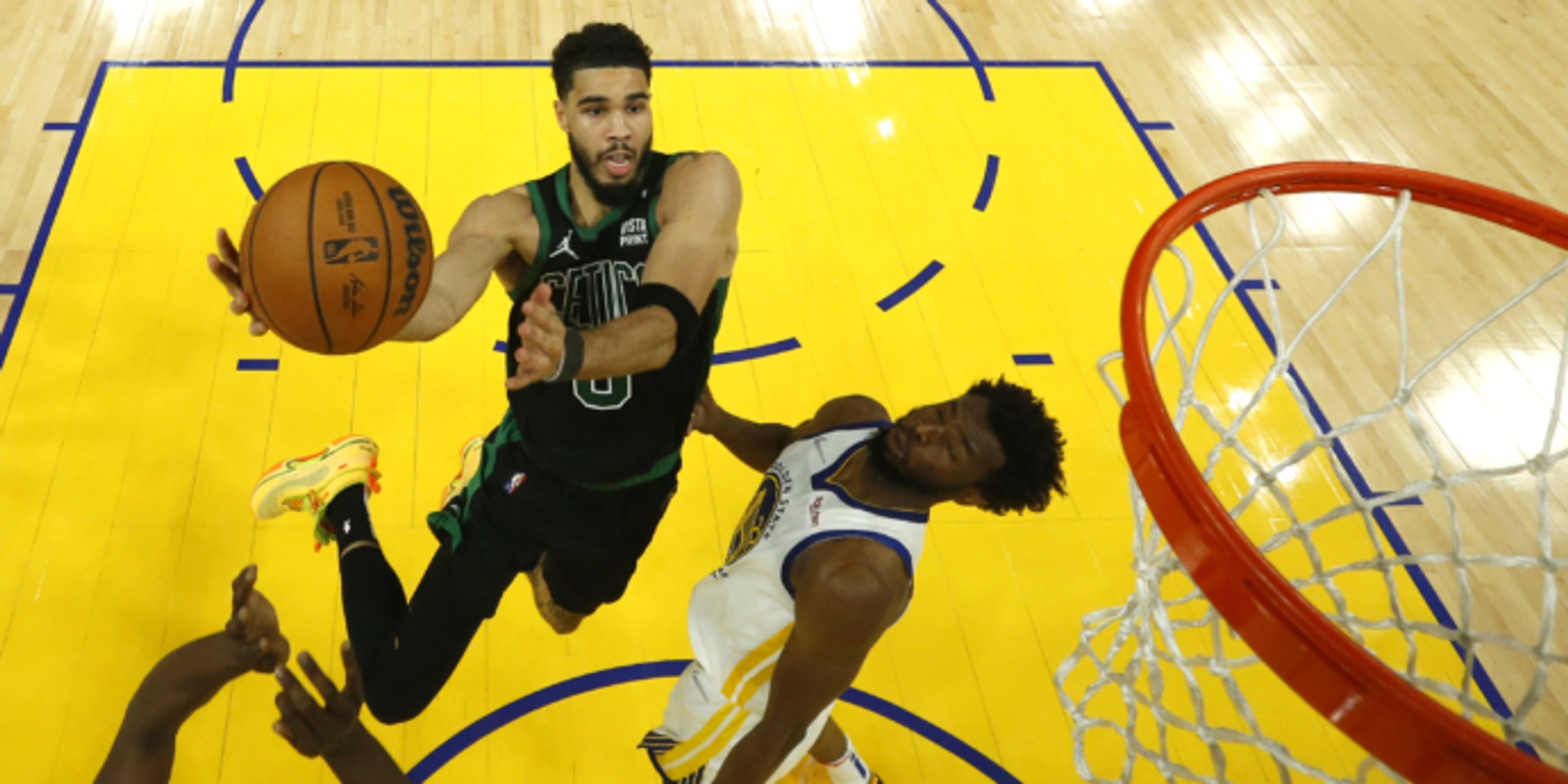 Enjoying the journey, through the lens of Jayson Tatum

On a personal note, it was one of the best days of my professional life. The arena itself was buzzing in anticipation of a series-shifting game. For a fan base that's (mostly wrongfully) berated for not being on time, the arena filled up pretty quickly with Miami Heat fans.

Before the game, I got to meet the legendary duo of Doris Burke and Mark Jones, Yahoo's Chris Haynes and other giants in the industry. It was a surreal stretch of meet-ups considering my wild journey to this point.

And then there was the game itself: a knock-out, drag-out fight until the Boston Celtics turned up the sliders late in the third quarter. A 59-58 Celtics lead with 2:44 left in the third turned into a 77-60 lead with 9:35 left in the fourth. A work of mid-range mastery from Jayson Tatum pushed the lead to 17, forcing Erik Spoelstra to call timeout at the 9:35 mark. Poor Max Strus couldn't do much about it.

I found myself marveling at Tatum's game that night. It wasn't his most efficient scoring outing; he finished with 22 points on 20 shots (5-of-12 from two, 2-of-8 from three). He coughed up the rock five times — two offensive fouls, two (tough) passes that went out of bounds, and a live-ball turnover where he tried to thread a needle into paint congestion.

But I quickly found the fun of a young superstar figuring things out on the fly against an elite defense.

Here was Tatum, a natural bucket-getter, not just being forced to make playmaking reads. No, no, no. He had to set up the chessboard. Because of the Heat's personnel, and because of their aggressive help principles and occasional pre-switches, Tatum was often tasked with setting up a pick-and-roll before actually running what he wanted.

Tatum starts the possession defended by Caleb Martin. A handoff between Tatum and Jaylen Brown invites Jimmy Butler into the fray. A ball screen, this time with Al Horford, calls up Bam Adebayo. Tatum calls for another ball screen to target Duncan Robinson, his ultimate goal from the beginning.

The Heat don't want to switch this one, so Robinson executes a show-and-recover. Derrick White slips into open space with Robinson and Adebayo focused on Tatum. But because Adebayo is involved above the break, the Heat's backline help is pretty small. 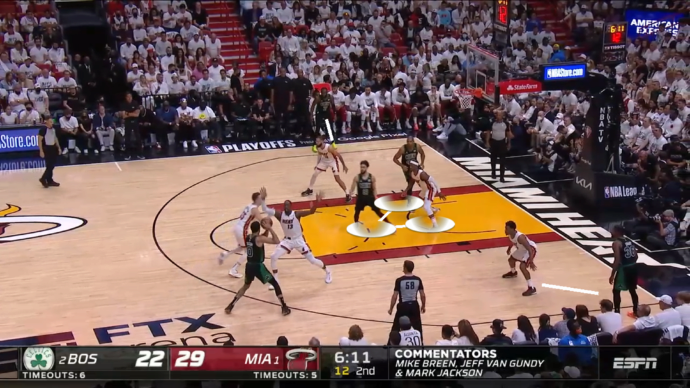 Butler is an All-World defender, but he's stuck between two players in the paint. Robinson hasn't gotten back to White, so Butler has to hold. The issue becomes Horford. Martin can't drop down to pick up Horford like he normally would because Brown is in the weakside corner.

Tatum simply waits to see who Butler commits to. Butler drops back to Horford once he senses Robinson is nearly back to White; in that moment, Tatum fires a bounce pass to White for a layup.

All of that happens within an eight-second span.

To be frank, Tatum wasn't nailing all of that, to this degree, at the beginning of the season. He certainly wasn't doing it with a level of consistency last year. But strides have continued to be made. Even when the result wasn't great, you could see the process improve. He became smarter. The decisions were made quicker, and with more nuance.

Tatum had seen a little bit of everything through that Game 5. He saw a version of that switch-with-help-behind-it defense during his first-round series against the Brooklyn Nets. In the next round, the Milwaukee Bucks flowed between sending two to the ball and daring Tatum to beat them in drop coverage.

The drop coverage bet was a poor one on the surface — Tatum is a dynamite pull-up shooter — but the Bucks knew there was refinement needed from Tatum inside the arc.

The floater wasn't consistent yet. If the easy pull-up wasn't there, Tatum sometimes struggled with driving too deeply into the pocket, either turning drop coverage into a late switch or allowing his own defender to recover. That led to some ugly late-clock possessions.

The Heat were a juiced-up version of both. They occasionally rushed Tatum with two defenders like the Bucks did. They gave up switches, but packed the paint with helpers like the Nets attempted to do. Through the mix of coverages, Tatum thrived, struggled, and ultimately thrived again.

I asked him about his comfort level against, well, everything after that Game 5 against Miami.

"Comfort level? From a scale of 1-to-10?" Tatum quipped with a smile before answering. "I'm very comfortable. Each series presents different challenges. Miami guards differently than Milwaukee did. Watching film from game to game, that's the key. Seeing what you did well, what you can improve on, what adjustments they might make and seeing what to be ready for."

Tatum couldn't quite crack the final boss in the Golden State Warriors.

His series averages were fine — 21.5 points, 6.8 rebounds, 7.0 assists, 1.2 steals and 0.7 blocks — but not up to superstar standards. For every bonus, there seemed to be an annoying negative. Seven dimes from your star wing is dope, but nearly four turnovers a game isn't what you want. He shot a robust 45.5% from three on 7.3 attempts per game, but those inside-the-arc struggles — 31.6% from two on 12.7 attempts — popped up in a big way.

The Warriors deserve credit for never letting Tatum get comfortable. They made sure he saw a healthy dose of switches (74 picks), drop coverage (45 picks), and a mix of hedges and blitzes (42), per Second Spectrum. And regardless of what the initial coverage was, the Warriors had a way of varying their help defense behind it.

Sometimes, they'd pinch the help in early to restrict driving lanes. Other times, Tatum would have early access to the rim, only to be met by late helpers converging into the paint. That cat-and-mouse game ultimately decided the half-court battle in this series.

Add in the bodies he saw — Andrew Wiggins, Klay Thompson, Gary Payton II and others got a taste of the Tatum assignment — and it should come as no surprise that this was Tatum's worst playoff series as a driver. On possessions where Tatum shot or passed to someone who shot after a drive, the Celtics generated 0.77 points per possession (PPP). It ended a streak of stark improvement from Tatum in that area:

It wasn't always pretty. Not that they need my permission, but Celtic fans and NBA enthusiasts are within their right to be disappointed in Tatum's output during the Finals.

All I ask is that we don't lose the plot.

Tatum didn't struggle on his own; remember, before Draymond Green missed a chunk of games during the regular season, it was the Warriors who held the NBA's best defensive rating. They pinpointed what Tatum's weaknesses were and poked at him. And this is on top of what Tatum was asked to do defensively — often navigating the Green assignment so he could switch onto Stephen Curry when necessary, or dealing with drives from Wiggins on the ball.

Beyond that, look at the growth Tatum has made as a scorer and playmaker over the past year-and-a-half. Heck, look at the growth he made this postseason. Defenses keyed in on him, threw different schemes at him within the same quarter, and he was mostly able to figure it out.

This is a sour end to the season, but it's a season in which Tatum was an All-Star once again, earned All-NBA First Team honors, finished sixth in MVP voting and led his team to the NBA Finals for the first time.

This was a darn good year, and now Tatum has to stew in this Finals loss for a bit. His history already suggests he'll get better heading into next season; with this frustrating finish, I'd bet the house on Tatum making a substantial leap over the summer.