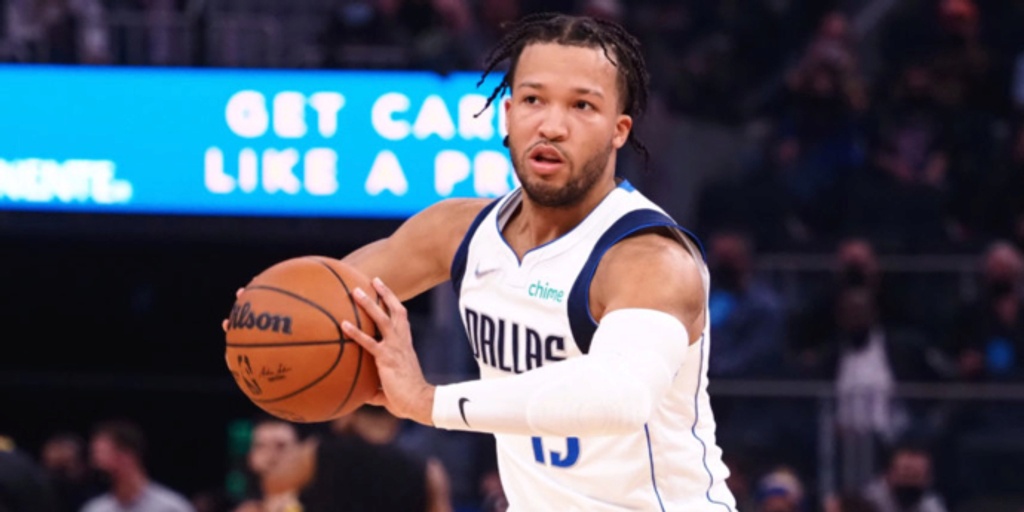 Blink and you might have missed it, but Jalen Brunson has already arrived on the national scene.

Not only has Brunson thrived with the Dallas Mavericks this season, he was also highly coveted prior to the 2022 trade deadline, with several teams expressing interest in the 25-year-old.

The New York Knicks were among the potential suitors, but a trade didn't come to fruition. However, New York is reportedly interested in pursuing Brunson when he hits unrestricted free agency this offseason.

It's worth noting that Brunson’s father is a former Knick and was the first client of team president Leon Rose. Brunson’s father also served as Tom Thibodeau’s assistant in Chicago and Minnesota – and the Knicks have long sought to fill their hole at point guard. Brunson’s overall fit in New York is debatable; but regardless, the Knicks' interest will almost certainly drive up Brunson’s price point.

But Brunson was already due for a big pay day after his terrific 2021-22 campaign. Last season appeared to be somewhat of a breakout year for Brunson – 12.6 points, 3.5 assists and 3.4 rebounds in 25 minutes per game – but he’s demonstrated an even higher ceiling this season.

Prior to entering the NBA, Brunson established himself as a top-tier player in college. He was named the AP National Player of the Year in his third and final season at Villanova, averaging 18.9 points, 4.6 assists and 3.1 rebounds per game – all while leading the Wildcats to a national championship. Despite leading the team in points and assists, Brunson was overshadowed by a few of his teammates – namely, Mikal Bridges and Donte DiVincenzo.

Brunson ultimately fell into the second round of the 2018 NBA Draft due to questions about his size and defensive shortcomings. He was eventually selected No. 33 overall by the Mavericks. He is one of only two AP National Players of the Year to slip into the second round since the award's inception in 1961. The other? Also an undersized point guard, who was drafted just one year before Brunson: Frank Mason III.

Mason played four seasons in the NBA, and never established himself as a fixture for any of his three teams. Brunson has been quite a bit more successful thus far.

Does this mean that Brunson can lead a team to contention, maybe even a championship? Possibly. Let’s remember that he has benefited from playing alongside an oversized – and incredibly gifted – lead guard in Luka Doncic. But with Doncic out of the lineup this season, Brunson has been even better, averaging 19.9 points and 7.8 assists. While the Mavericks only won seven of their 16 games without Doncic this season, let’s not be too hard on Brunson. Doncic is an incredibly special player, the likes of which very few players can replace.

It should be said that the arrival and fit of Spencer Dinwiddie has the potential to complicate negotiations between Brunson and Dallas on a long-term deal. Brunson will reportedly look for a contract that's worth approximately $80 million over four years. What does Dallas do if he holds firm on that figure?

But Dallas is already way over the 2022-23 salary cap. Signing Brunson to an extension seriously restricts the Mavericks’ ability to make additional moves. And considering that Doncic and Dinwiddie are both on-ball playmakers, does Dallas really want to invest in a third guard?

But the argument for Brunson signing elsewhere is weakened by the fact that there will be very few teams with cap space. In fact, only the Detroit Pistons, Indiana Pacers, Orlando Magic, Portland Trail Blazers and San Antonio Spurs are projected to have cap room.

The Magic have too many guards as is, the Pacers just brought Tyrese Haliburton on board, and the Trail Blazers will probably work to keep Damian Lillard and Anfernee Simons. The Pistons showed interest in Brunson at the deadline, so maybe there’s a match in Detroit. It’s also worth mentioning that a lack of cap space does not prohibit prospective teams from potentially landing a player via a sign-and-trade.

Ultimately, Brunson could end up being one of the crown jewels of the 2022 free-agent class. He appears more than open to remaining in Dallas – but, according to ESPN’s Tim MacMahon, money is a bigger priority than remaining with his current team.

Regardless of where Brunson ends up next season and beyond, he looks ready to take on a bigger role. If Brunson takes another step forward, $20 million per season could look like a bargain. But he could also struggle in a different system, with new teammates, coaches and surroundings. One way or the other, Brunson is a player who will be closely watched going forward. He's ready for the spotlight.