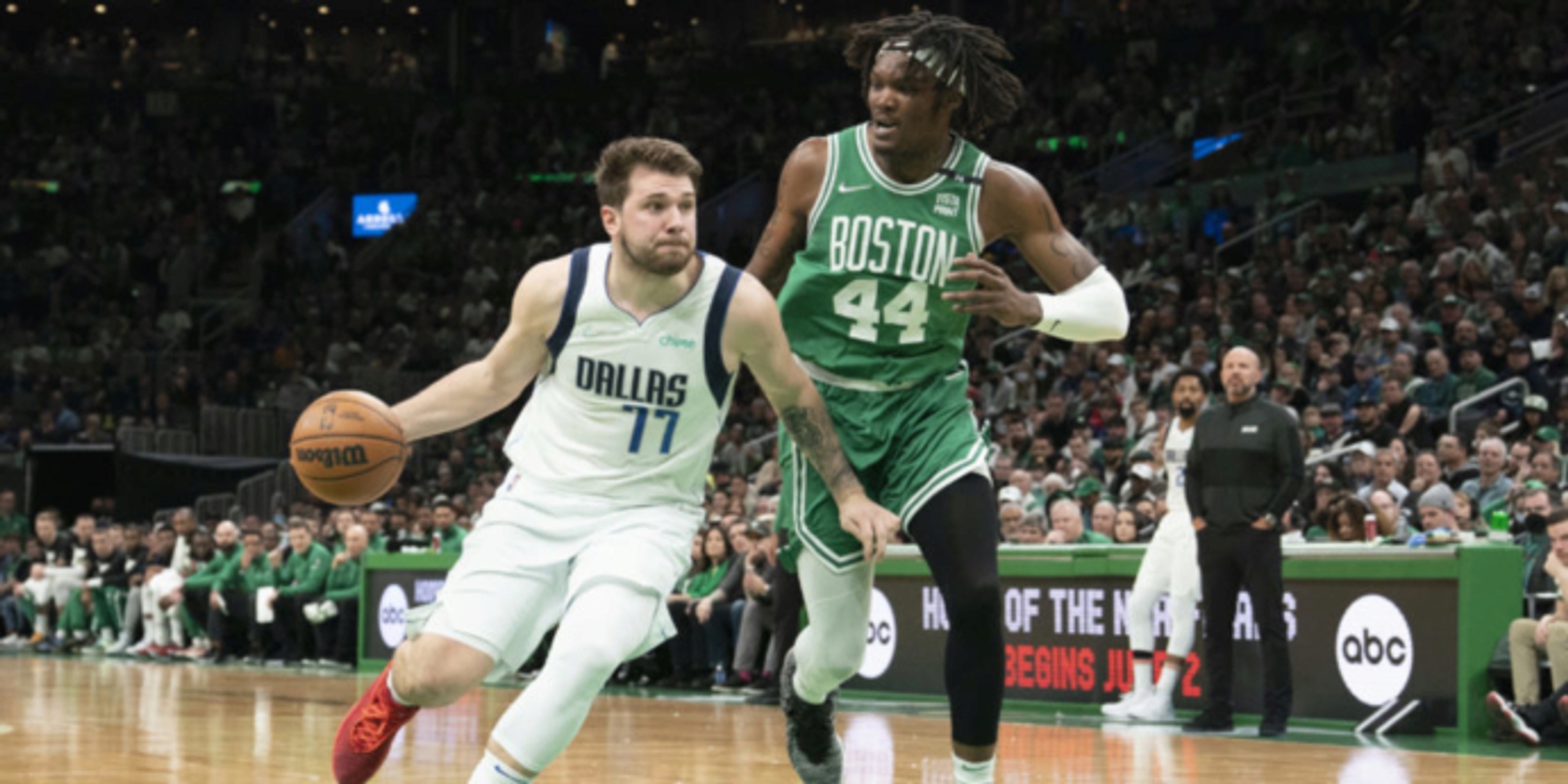 BOSTON (AP) — Luka Doncic returned from a hamstring scare to hit a tying three-pointer with a 1:21 left, Spencer Dinwiddie made the winner with nine seconds to play and the Dallas Mavericks spoiled Kevin Garnett's special day by beating the Boston Celtics 95-92 on Sunday.

With Garnett courtside awaiting the postgame ceremony to retire his uniform No. 5, the Mavericks won for the seventh time in eight games and snapped Boston's five-game winning streak.

Doncic, who left in the first half rubbing his left leg, finished with 26 points and eight rebounds. He was called for fouling Marcus Smart on the a potential tying three-pointer with five seconds left, but a review overturned it.

The Celtics won the ensuing jump ball, called a timeout and got the ball to Jayson Tatum, who missed an off-balance three-pointer at the buzzer.

Tatum had 21 points and 11 rebounds, but made just a pair of baskets in the second half and ended a five-game streak of 30-point performances.

Maxi Kleber had 14 rebounds for Dallas.

Doncic came up limping late in the first quarter and stayed in the game, rubbing his left hamstring. At the next whistle, he walked off and into the tunnel.

The three-time All-Star returned midway through the second quarter and showed no further ill effects. Doncic is fifth in the NBA in scoring with an average of 28.1 points.

Garnett received a standing ovation when he walked in, and he was honored with video tributes during most breaks. But one of the biggest cheers came early in the fourth quarter, when a ball got stuck on top of the backboard on the basket right next to his seat.

A floor crew member came out with a mop and offered it to the Hall of Famer as the crowd rose to its feet to cheer him on.

He declined, smiling. The crew member knocked it loose, then got a bro hug from Garnett.

The Celtics honored public relations vice president Heather Walker during a break in the second quarter. The longtime executive is fighting Glioblastoma, an aggressive form of brain cancer.

The Boston Celtics Shamrock Foundation said it will match all donations up to $100,000 the Heather Walker Glioblastoma Fund at the Dana-Farber Cancer Institute.

The teams, who are two of the top three in scoring defense, combined to allow just 85 points in the first half. ... Al Horford blocked two shots in one defensive stand. He also had five steals. ...Doncic hit a buzzer-beating three-pointer to beat Boston in Dallas on Nov. 6. ... The Celtics were called for a pair of technical in the second quarter, the first on Robert Williams III and the second on coach Ime Udoka.

Mavericks: At Brooklyn on Wednesday night.