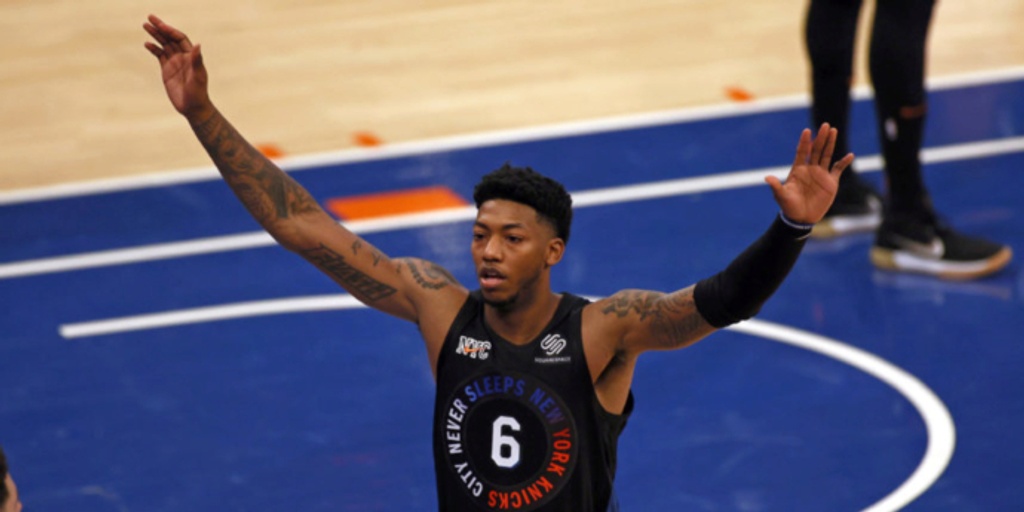 Tom Thibodeau has been fiercely loyal to certain players his whole career. He'd likely argue it's one of the reasons he's been successful as a head coach.

This season, for instance, Derrick Rose and Taj Gibson, two players who went to war with Thibs in Chicago a decade ago, are playing important roles on the Knicks.

Given their history, Thibodeau's allegiance to those two is certainly understandable. However, his fealty to another player on the team has exasperated Knicks fans for the better part of four months.

Coming into the 2020-21 season, there was little doubt that Elfrid Payton would be the Knicks' starting point guard. After all, Thibodeau's options at that spot were limited. Immanuel Quickley was an untested rookie. Frank Ntilikina hadn't proven he could contribute offensively. Austin Rivers was injured. And Rose was a member of the Detroit Pistons.

To his credit, Payton got off to a solid start. Over the first eight games of the year, he was efficient offensively, averaging 14.6 points and five assists per game while shooting 49% from the floor and 37.5% from downtown.

Payton has had other solid stretches throughout the season and deserves commendation, as he's been a full-time starter and steadying influence on a team that is seven games over .500 and has dramatically exceeded expectations. Payton has done what the coaching staff asks of him on a nightly basis.

"He gives us a physicality, allows us to do more switching than we normally would because of the size and toughness that he has," Thibodeau told reporters last month when asked about his starting point guard.

"He's an important part of this team."

However, at some point, it's on the coaching staff to make difficult decisions. And Payton has been a net negative for the Knicks for some time now. The numbers, both advanced metrics and traditional stats, make a very loud argument that is becoming very difficult to ignore.

Payton's inefficiency on the offensive end this season has bordered on historic. There are 126 players in the NBA averaging more than 10 field goal attempts per game. According to Basketball-Reference, Elfrid Payton is the only one of those 126 players shooting below 45% from the floor, below 30% from three-point territory, and below 70% from the free-throw stripe.

Defensively, the metrics may be more damning. With Payton on the court this season (he's logged a total of 1,424 minutes), the Knicks allow 111 points per 100 possessions. That's the worst on-court DefRtg on the team. With Payton on the bench (a total of 1,865 minutes), the Knicks allow just 104 points per 100 possessions. His cumulative Net Rating of -93 is 60 points worse than anyone else on the roster.

Recently, even when the Knicks have enjoyed success, sometimes it seems as though it's in spite of Payton. Consider New York's recently completed six-game road trip. In the 95 minutes Payton played, the Knicks were outscored by 51 points. In the 198 minutes Payton was on the bench, the Knicks outscored their opponents by 55 points. That's a whopping 106-point swing over just six contests.

Clearly, Payton's confidence is sagging. He's shot over 50% from the floor in a game just once over the past month. Over the team's last 15 contests, Payton is averaging 1.5 turnovers and less than three assists per game.

Suffering through Payton's struggles would be easier for fans to swallow if the Knicks didn't have any other appealing options for Thibodeau to turn to. However, that's not the case. Rose has been incredible since arriving in New York.

Over Rose's last 12 games, he is averaging 19.9 points, 5.1 assists (versus just 1.6 turnovers) and 3.8 rebounds, while shooting a scorching 57.4% from the floor, 48.6% from behind the arc and 90.3% from the charity stripe. Over the past month, Rose has posted a team-best plus-minus of +146, which is the highest net rating in the entire league, just ahead of Utah's Rudy Gobert.

Rose has excelled as the team's sixth man, though, so it's understandable if Thibodeau's preference is to keep him in that role.

Still, when the team is fully healthy, Thibs has plenty of other options. Quickley has been remarkably impressive during his rookie campaign, averaging 11.7 points in fewer than 20 minutes a night. Not only has he been efficient offensively — he's shooting 40% from distance and 89% from the free-throw line — Quickley has also done a terrific job taking care of the basketball. In the 61 contests he's appeared in, the rookie has committed more than two turnovers just twice. He is on pace to become just the second rookie in Knicks history to average more than two assists and fewer than one turnover per game.

Alec Burks is another player who has exceeded expectations and, before Rose's arrival, was often tasked with running the point and facilitating the offense late in games.

With both Quickley (sprained left ankle) and Burks (left knee contusion) sidelined Tuesday night, Ntilikina logged more than 15 minutes for the first time since mid-March and had an outsized impact on both ends of the floor. And Ntilikina has been surprisingly effective from three-point territory all year long, shooting 46.8% from downtown.

If the argument for starting Payton is having a big, physical defender on the floor to limit the production of opposing point guards, Ntilikina certainly checks that box. Ntilikina is one of the team's most versatile and effective perimeter defenders. And although he isn't as proficient a slasher as Payton, Ntilikina is a more reliable outside shooter. Ntilikina's presence should stretch the floor, prevent defenses from sagging into the paint and potentially open up driving lanes for Julius Randle and R.J. Barrett.

Some pundits have argued that Payton doesn't play in the fourth quarter or in crunch time, so it's irrelevant if he starts. However, in two defeats last week (against the Nuggets and Suns), New York fell way behind in the first quarter and could not dig out of that early hole. Last night in Los Angeles, in what was a crucial game in terms of playoff positioning, Payton only played 14 minutes, but New York was outscored by eight points in those 14 minutes. The contest ended up being a one-possession game that was decided in overtime.

As a result, the Knicks will likely need to win each of their final three games to secure home-court advantage in the first round of the playoffs. If they finish the season in sixth place, that would mean a first-round matchup against the Milwaukee Bucks. If they finish fourth, they would either host the Miami Heat or the Atlanta Hawks. It's easy to see which of those two outcomes is more preferable.

It's not an exaggeration to say every minute of these contests could be crucial. And obviously, that would be the case next week if the Knicks do end up participating in a playoff game for the first time in eight years — a very likely scenario at this point.

Thibodeau has drastically reduced Payton's playing time over the course of the season. Payton averaged more than 29 minutes a night in January, compared to just 23.3 in March, which has dwindled down to less than 16 minutes per game in May.

But will the notoriously loyal Thibodeau be willing to cut the cord completely and revamp his starting lineup? Is there a logical argument other than continuity or possibly chemistry? Probably not. And one way or another, the coach will soon have to make a tough decision.