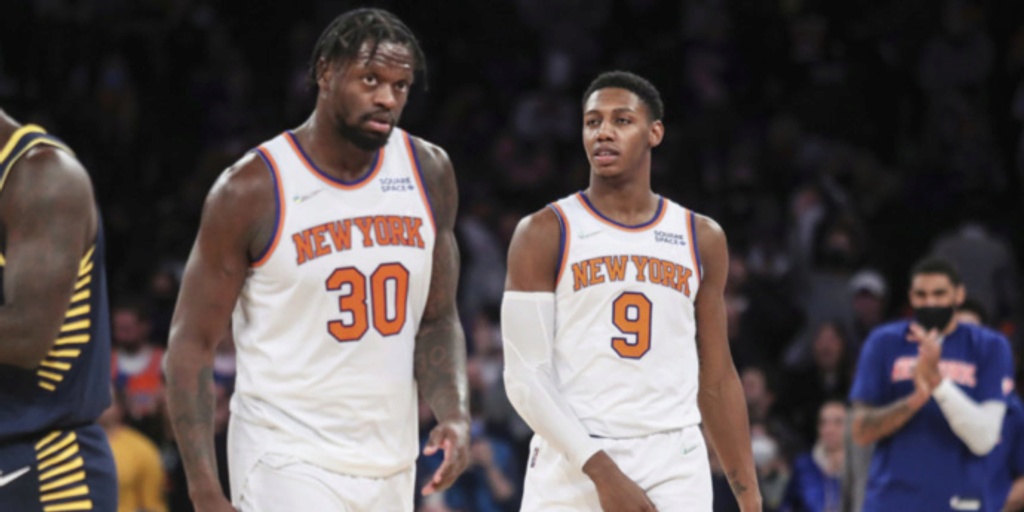 This may end up being another inconsequential trade deadline for Knicks

As yet another trade deadline approaches, the New York Knicks have found themselves in the familiar position of looking for a shot in the arm.

And yet again, it doesn’t seem likely they’ll get one.

At 24-31, New York enters play on Feb. 9 in 12th place in the Eastern Conference, good enough to be 2.5 games behind the Atlanta Hawks for the 10th seed. At this point, they can only aspire to get an opportunity to play themselves into the 2022 postseason.

There’s still a lot of season left, but Leon Rose and his front office hasn’t found an opportunity to dramatically reshape the roster, and those chances may have dried up with Tuesday trades that saw CJ McCollum and Tyrese Haliburton change addresses.

On Tuesday, McCollum saw his nine-year tenure as a member of the Portland Trail Blazers end when Portland dealt him to the New Orleans Pelicans in exchange for a package that ultimately yielded Josh Hart and draft compensation. And shortly thereafter, the Sacramento Kings surprisingly shipped Haliburton to the Indiana Pacers in exchange for a package headlined by Domantas Sabonis.

Obviously at different points in their careers, what McCollum and Haliburton each have in common is that they would’ve upgraded Tom Thibodeau’s backcourt and at least been a step in the direction toward helping the Knicks replicate last season’s success. The Knicks were linked to both players, but now, New York must look elsewhere.

For the most part, the deals that happen are the ones that nobody hears about.

Sure, James Harden could end up in Philadelphia and all indications are that the Los Angeles Lakers would love to find a taker for Russell Westbrook, but other teams don’t exactly seem to being ringing the phones off the hook at Penn Plaza. If they were, either McCollum or Sabonis — or perhaps both — could have landed in Manhattan.

Where the Knicks go from here remains to be seen.

Could Julius Randle be headed elsewhere?

Last season, Julius Randle capably led the Knicks to the fourth seed, was named an All-Star for the first time in his career and won the NBA’s Most Improved Player Award. Less than a year later, his story has been completely rewritten.

Perhaps mostly due to his poor play, Randle is the player on the team whose name has been called the most as it relates to trade rumors, and that’s because — despite his struggles — his talent is undeniable. He would provide the Knicks the best opportunity to dramatically reshape their roster while dealing him would also offer RJ Barrett more opportunity to play with the ball in his hands.

According to SNY’s Ian Begley, Randle has drawn interest from several teams around the league, and the Sacramento Kings were believed to be among them. It stands to reason that the front office there coveted Sabonis more than Randle. Based on their play this season, it’d be hard to argue.

Just one season removed from the first All-Star berth of his career, Randle’s poor play and attitude have hurt his value, but he’s still one of the team’s two most talented players, at best. Trading him for a young point guard could make sense for the Knicks, but that ship may have sailed with Haliburton having been sent to Indiana.

The biggest impediment to a Randle deal for the Knicks would be the return. If a trade wasn’t yielding a top flight prospect or an established player that would help New York remain in the playoff hunt, it would be difficult for the front office to divest Randle while his value is as low as it seems to be at the moment.

Thus far, the Cam Reddish era in New York has been more of a snooze fest than must see TV, and it’s because Reddish has been used sparingly, to say the least.

One of the things that players who have played for Thibodeau has respected about him are the standards that he holds his players to and his equitable administration of his values.

In other words, it’s very on brand of the coach to demand that Reddish play his way into the Knicks’ rotation rather than simply handing minutes to the youngster because other people have identified him as someone with promise.

Quentin Grimes and Immanuel Quickley have earned their minutes, while Alec Burks and Evan Fournier have been the best player on the floor in more than one appearance this season.

There are only so many minutes to go around, which is why there have been pretty persistent reports concerning the Knicks and their willingness to part with one or two of their veteran pieces; Fournier and Burks have both joined Kemba Walker as players who are reportedly available.

Trading away one of the veteran pieces for draft compensation could make sense for a New York team that wants to get Reddish more opportunity, but that might not make the team more competitive in the short-term.

Mitchell Robinson is opening some eyes

There’s no denying what Mitchell Robinson has produced on the court as of late.

Over the past month, Robinson has recorded six double-doubles and is averaging 13.8 points, 10.8 rebounds and 1.7 blocks per game. He’s heading for free agency this summer, and retaining his services is likely to be expensive.

Although the league has mostly gone away from “traditional” big men, Robinson is a capable defensive presence on the perimeter, and he has proven that, when healthy, he’s able to impact games. That he can do so on the offensive end without having plays called for him is a plus. Any team in the league could use that skill set.

According to Marc Berman of the New York Post, the Detroit Pistons may have interest in Robinson, though Berman doesn’t specify what the Pistons have that the Knicks would covet.

As it stands, the Knicks don’t have the same kind of cap flexibility they had a year ago — they pretty much blew that last summer. Adding an expensive multi-year pact for Robinson would only make things worse, and if the team isn’t sure that it’s current core is who it wants to be married to for the next three or four years, Robinson could wind up with another address.

So… Where exactly are the Knicks going?

To say that the 2021-22 season has been a disappointment would be an understatement. The Eastern Conference has certainly gotten stronger around the Knicks, but after acquiring Kemba Walker and Evan Fournier last season, expectations were rather high for the team that captured the conference’s fourth seed last year.

Acquiring Reddish and deploying Grimes and Quickley are things that a rebuilding team would do, but re-signing most of its core free agents isn’t. The Knicks re-signed Randle to four-year, $104 million extension before they needed to, gave Fournier a four-year deal worth nearly $80 million and committed years and dollars to Alec Burks, Derrick Rose and Nerlens Noel. A team wouldn’t do that unless they legitimately thought they had a chance to contend.

Teams that know they don’t, from a management standpoint, look more like the Oklahoma City Thunder and the Houston Rockets. They divest every possible asset for draft compensation and use their salary cap space as currency to help teams rid themselves of onerous contracts.

That the Knicks have seemingly done an about face, and so quickly, is a blemish on the record of the front office. As the team reportedly dangles its veteran players in an attempt to find playing time for younger ones, on some level, represents failure.

At this point, it’s difficult to know exactly what the Knicks are doing. And that’s not a good thing.