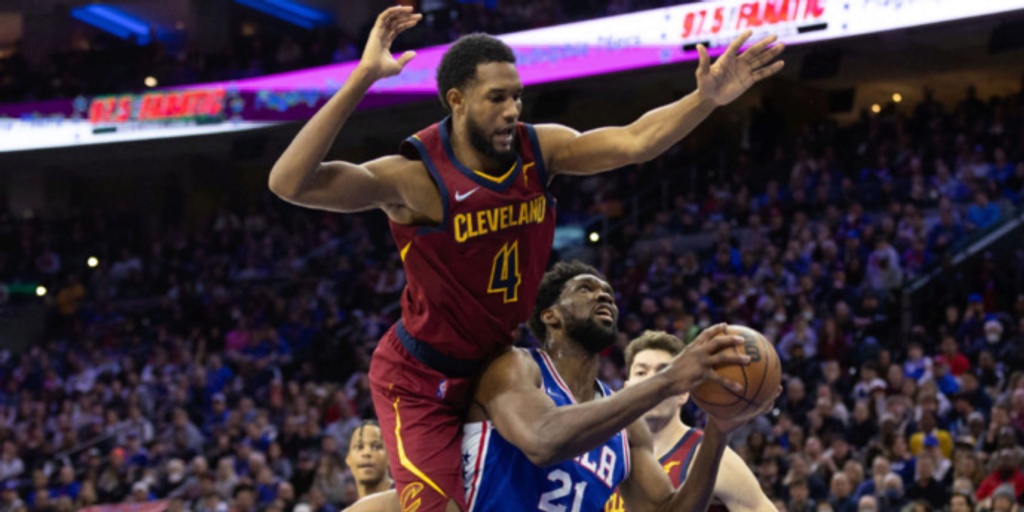 A gift, not a grift: Coming to the defense of foul-drawing

I'd like to take you on a trip down memory lane, if I may.

The date is Jan. 11, 2021. It's a chilly night in Charlotte, North Carolina. People are stuck in traffic, because that's how it goes after 5 p.m. in this city. There are no fewer than 12 Cook Out locations flooded — and for that, we say thank you and God bless.

More importantly, there's a basketball game going on between the Charlotte Hornets and the New York Knicks.

Midway through the third quarter, then-rookie phenom LaMelo Ball decides to push the ball in transition. He glides through the middle of the floor, targeting fellow rookie Immanuel Quickley on a drive as he backpedals.

LaMelo decelerates before crossing to his right, then begins his gather. Something funny happens from there though.

That's right — LaMelo attempts, possibly, the worst James Harden impersonation of all-time. He goes searching for Quickley's arm and gets nothing but air. The momentum from the flail alters his balance — the last thing he needs since he's in the midst of a wrong-hand finish.

Show 10 random NBA fans that clip, and I guarantee at least eight of them give some sort of "that's what you get" sentiment for trying to generate contact. I immediately fell — and continue to fall — on the other side of the aisle. As I tweeted in the moment: That attempt is proof that foul-drawing is a skill.

NBA offenses have never been as prolific as they are right now.

We're buzzing with buckets in this era, currently riding a four-season streak of the league's average Offensive Rating eclipsing 110 points per 100 possessions.

The emphasis on shooting and spacing — linked, but not synonymous! — has led to a more open game. Ball-handlers are more dynamic, blending slick handles, a more-willing trigger from (super) deep and driving chops that leave defenders asking, "What the heck am I supposed to do with this?"

We love buckets around these parts. Pull-ups. Stepbacks. Floaters. Eurosteps. Reverse lay-ins. Thunderous finishes. Post work — hooks, up-and-unders, fadeaways. Scoring is fun, obvious to the eye, and easy to break down and compare for the most part.

There is a brand of scoring that doesn't get the respect it deserves, however: free throws. Not only are they boring to watch, but the process in which they're earned also has an approval rating of, like, six percent.

Don't take my word for it: I asked y'all.

It's anecdotal of course, but it's telling that 72.3% of the vote — well over 4,500 people — voiced their displeasure of foul-drawing. Or foul *baiting*, since that distinction matters to so many of you.

You can cycle through the replies and quote tweets if you'd like, but the common theme was a sense of gaming the system. Those dreaded non-basketball plays. The flailing. The possessions where players make moves to draw contact versus trying to make the shot.

It's a fair position in vacuum. I got a hearty laugh out of Chris Paul drawing a rip-through foul on young Jonathan Kuminga some 70 feet from the basket, but I can understand why that might be annoying.

(On the Paul front, he talked about the rip-through on JJ Redick's podcast not too long ago. I'd recommend it; also, he's right.)

What I will say, however, is that foul-drawing as a concept seems pretty underrated. Flat-out disrespected, even. I don't think enough people understand the level of skill it takes to draw fouls consistently.

Actually, let's talk about the Paul thing for a minute.

Did you know he's essentially made ICE coverage — the tell is when the on-ball defender positions himself in a way to force the ball-handler towards the sideline — unplayable against him?

Going into an ICE possession, you have to worry about him snaking the pick and flowing into the pull-up middy he shoots 8,032% on. He's one of the three best pocket passers in NBA history (argue with your mother), so any miscue can lead to a shot at the basket for his big. If all else fails, he can string out the pick, force a late switch and either:

On top of that, you can't even press him prior to his drive because he'll locate your arm. If you think you can get your hand out of the cookie jar quickly enough, you can't. He's too quick, too good at timing it.

Over the past three seasons, Paul-led ball screens are generating north of 1.1 points per possession against ICE coverage — the second-best mark among high-volume guards, per Second Spectrum. Again, Paul as a scorer and passer against the coverage is deadly enough.

On the foul front, only Ja Morant (91) has drawn more fouls against ICE coverage than Paul (83) during that span. Considering the stark difference in athleticism and shot profile between the two, you can surmise who's drawing what type of fouls the most.

Of course, Paul isn't the only guy that can make you pay in that way.

Kevin Durant might be the godfather of the move. He doesn't go to it as often anymore, but he's sure to remind you to keep your hand out of the cookie jar.

Trae Young sprinkles it in as well, though we'll talk about him a little later.

Can we talk about the Cameroonian Cheat Code?

People are furious with the whistle Joel Embiid gets. I get it in a vacuum; it's a bit wild to watch a guy that big hit the ground (or flail his arms) as often as he does. But man, I really do implore you to dig into the subtleties of his foul-drawing.

Think about your priors when defending Embiid. He's bigger than you, stronger than you and likely quicker than you. You're already working at a disadvantage before digging into the skill level. Then, he's smart on top of all of that.

If you think guards can be handsy before an attack, bigs definitely are. Embiid has countered by mastering the rip-through in his own right. Because he's so comfortable with his jumper now, defenders are even more susceptible to his pump fake. You're truly at his mercy when he faces up.

On a related note — very, very, very, quietly, Embiid is one of the most skilled drivers in basketball.

The threat of the jumper (and pump fake) opens up driving opportunities for him. I've found myself in awe of the way he decelerates or changes his stride length when attacking the basket. And when those skills work in conjunction, defenders have no idea what to do with him.

I still have the foul he drew against Evan Mobley last week on a loop in my head.

Mobley is already one of the best defenders in the sport, and he has nothing here. Embiid faces up, hits Mobley with a stutter-rip (shout out PD Web) and immediately gains inside leverage. On the gather, Embiid hits the brakes on his second step and waits out the Mobley contest to draw the foul.

Think about the amount of balance it takes to pull that off, as well as the strength it takes to power through and get a shot up.

You know who else is good at throwing defenders off in that way without really getting credit for it? Giannis Antetokounmpo.

It turns out "Run and Dunk Man" has a little more to him. He doesn't just hit you with spin moves and Eurosteps; he mixes up the speed and stride length of those moves.

You generally think of bigs — Giannis and Embiid in particular — when you think of strength-based foul-drawing, which is precisely why Jimmy Butler is so unique.

He doesn't possess elite burst. The handle isn't great. His jumper is non-threatening. He's passive at times as a scorer. And yet, Butler (5.17) is one of four high-minute players averaging at least 5 two-point shooting fouls drawn per 100 possessions: Embiid (8.16), Giannis (7.82) and DeMar DeRozan (5.03) are the others.

Butler does possess great footwork, which helps him in face-up situations. He may be the NBA's prominent stutter-rip enthusiast. But man, does he do a lot of work with his shoulder.

If he gains an inch, he's driving his shoulder into his defenders' chests. And if they try to recover, he's able to pump fake them into oblivion, or plow through them for foul calls. Look no further than his masterclass against the Houston Rockets on Monday night.

As annoyed as people have been with Harden's tricks, his ability to power through guys has gone grossly under the radar for most of his career. Remember the LaMelo play up top? Harden has the cadence down and the strength to power through.

He weaponizes his strength with a low, lull-em-to-sleep dribble that unlocks the rest of his game. Stay lax? Stepback time. Try to shade him a certain way? He's able to attack your front foot and getting downhill. Try to disrupt the dribble? He's powering through that sucker.

Then, there's the finesse side of the equation, where unpredictability can put defenders in torturous positions.

That's where Young comes in. He's a tricky little booger you can never really catch. His ability to change directions is nearly unrivaled in the leauge.

You don't think of him as explosive because of the lack of vertical juice, but he's a pretty violent dude in terms of darting around; he's the NBA's (peak) LeSean McCoy in that regard. On top of that, I'm not sure anybody in the league decelerates quite like him. To have that, on top of his ball skills, is simply unfair.

I'm not here to argue that watching these guys rack up 10 to 12 free throws on a given night is as fun as an ankle-breaking crossover that flows into a pull-up.

I do think there needs to be more credit given toward how hard it is to make defenders wrong as consistently as these guys do. There are so many split-second reads (and microskills) at play that can be missed if you aren't paying attention.

Or put another way: If it was easy to flop or grift your way into calls, more people would pull it off consistently.

They don't for a reason.