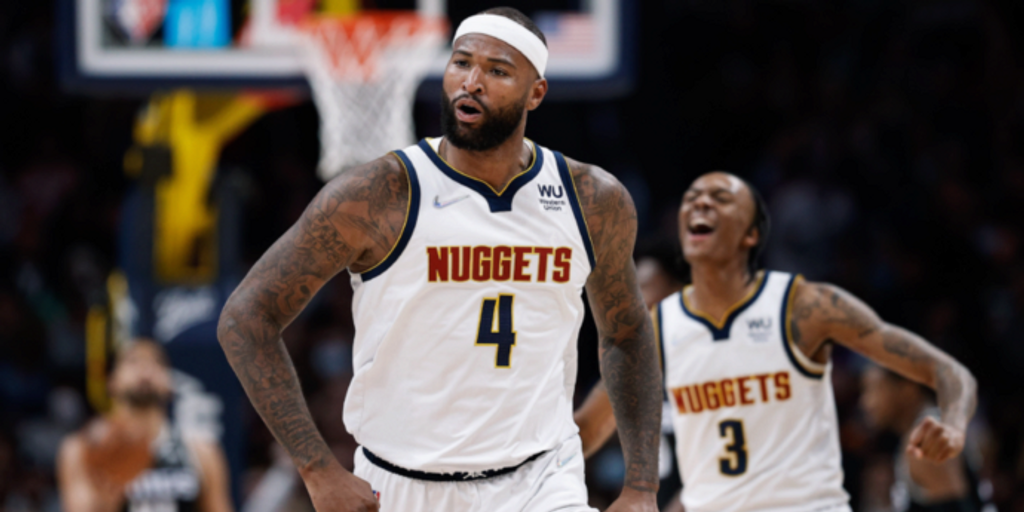 As I got heavily into the NBA when I was in high school, I found a particular affinity for the Sacramento Kings. Rudy Gay was the one for me, man. I loved the old UConn highlights and the dunk packages he put on display in Memphis and Toronto, and I was like "Okay, yes." I thought Ben McLemore as Ray Allen was a bit much, but Ben as Wes Matthews with more juice? I was in.

DeMarcus Cousins, he was an anomaly to me.

My entire time growing up as a casual fan of the game, the idea of centers with superlative ball skills never crossed my mind! My dad showed me reels of Kevin McHale, Moses Malone and other post-centric savants, so that was the foundation of what I thought a big man in basketball was.

And then I saw this for the first time!

That was one of the first earth-shattering moments for me in sports.

All the concepts and boxes I'd placed big men into combusted like an atom bomb as soon as I saw that clip in study hall.

A 6-foot-11 center can run the floor and go for a coast to coast jam like THAT?

I dove in more. I started to recognize the passing with more regularity. He expanded his game out to the perimter towards the end of his Sacramento tenure, taking over 5 threes per game prior to the trade to New Orleans. (There were a lot of "Is DeMarcus Cousins shooting too many threes?" questions, and I kept the receipts). The flashes of him and Anthony Davis together were mind-bending. That team was going to be my NBA League Pass darling.

Through the first 48 games prior to Boogie's injury, the Pelicans were 27-21 with the seventh-ranked offense in the league. Davis, Cousins and Jrue Holiday were beating teams by plus-6.9 points per 100 possessions when sharing the court. I'm not trying to plunge the knife deeper Pels fans, but man, people need to remember how freakin' good that team was!

New Orleans wasn't a title contender, but it had a foundation that was so enticing. The Pels went on to sweep the Portland Trail Blazers in that 2017-18 postseason in Jrue Holiday's national-coming-out party, and lost in five games to the Golden State Warriors in the second round. All without Cousins, who missed half of the season and the playoffs due to injury. Yeah, I'm choked up reminiscing on a Wednesday afternoon.

Injured again in Golden State the following campaign and bouncing around — playing in Houston and with the Los Angeles Clippers last year — Cousins went on to play just 71 regular-season games over the next three years.

However, earlier this season, he played 17 games with the Milwaukee Bucks. And while he wasn't perfect.... *whispers* I think they should have kept him. The physical limitations after his multitude of lower-body injuries have made him most suited as a drop defender; although, he had some interesting moments of playing at the level of the screen. When the Bucks waived him, I was kind of at a loss.

But I think he's more than proven that the decision may have been a mistake on Milwaukee's end as he's played perhaps his best basketball post-New Orleans as a Denver Nugget!

The Nuggets are 13-1 when Cousins plays, and while pointing the finger to him as the sole reason would be ridiculous, he's absolutely played a part in their success.

In fact, Denver is 16-5 since Jan. 23 (Cousins' first game with Denver) with the sixth-ranked offense and defense in the league, per Cleaning the Glass. While On/Off stats are finicky, Nikola Jokic's plus-20.6-point differential is not a mirage. That number partially paints the picture of his MVP-caliber season as one of the most impactful individuals in the league. Yet, it also leaves brushstrokes of the struggles of Denver's bench this season.

Michael Porter Jr.'s injury pushed depth players into much larger roles than could have been conceived in the preseason. The lack of a true backup center on the roster was greatly felt, as JaMychal Green struggled to find consistency with his shot and Jeff Green at the 5 has been a mostly rough look.

Cousins, on the other hand, has been able to bring some real stability off the bench. The Nuggets can replicate some of their Jokic staple actions with Cousins' passing and court vision.

He can attack off the bounce, his shot is enough of a threat to warrant regular-season closeouts and he makes really solid, quick decisions; defenses almost have to guard him out on the perimeter. He draws two with ease, absolutely feasting on post mismatches, but more importantly, he's drawing them routinely. He can create advantages and stir the drink at times for bench lineups.

Golden State and Houston left those games battered after dealing with Cousins on the interior.

He's been setting some absolutely bone-crushing screens, paving the way for Denver's guards and wings to open shots.

Cousins and Bones Hyland (shout out to Bones and DNVR) have sneakily developed a really nice two-man game in pick-and-roll.

Their chemistry has really seemed to bud over the past few weeks, Bones has continued to grow in his role, and the Nuggets' bench is steadily becoming at least neutral after being one of the worst units in the league earlier this season.

Bones-and-Boogie lineups are pummeling the opposition, scoring 123.2 points per 100 possessions per Cleaning the Glass (98th percentile). It's worth taking that with a grain of salt, as it's only a 198 possession sample, but it tracks with what's played out on the court.

Defensively, Cousins has, again, been solid. He's been fine as a drop defender, but the Nuggets have also tapped into some higher showing with him, or even all-out blitzes on unsuspecting guards. He's still got some short-area quickness that can take ball-handlers by surprise, along with some fantastic hand speed and hand-eye coordination to pick pockets.

That the Nuggets can run more than one base scheme with Cousins on the court has made it even more viable for him to play a significant amount of time.

Is Cousins a 13.2-point, 7.0-rebound, 3.0-assist, 2.1-steal/block-on-64.0%-True-Shooting guy moving forward (his six games since the All-Star Break)? Probably not! But, this stretch, along with his full tenure in Denve, has shown he has more than something in the tank. He's playing quality minutes and filling a void the Nuggets were unable to for half the season.

The Nuggets are 9-1 in their last 10, one-and-a-half games back from the No. 4 seed in the Western Confeerece, and Porter's potential return looms on the horizon. This team is good, and Cousins playing a small part in that has been awesome to watch unfold.

Keep Boogie and the Nuggets on your radar as the season closes.