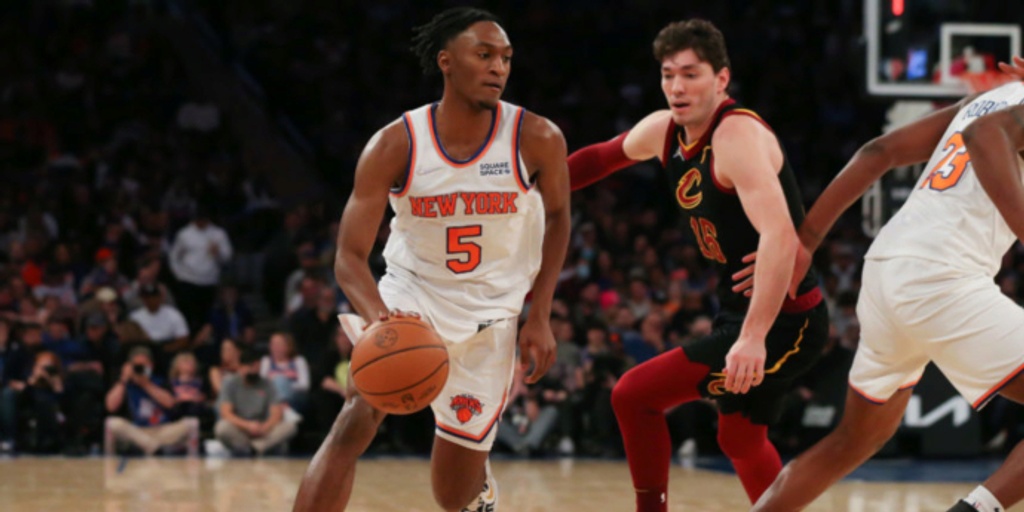 Immanuel Quickley: Pressuring the rim without getting there

He can’t be a lead guard.

He’s not a point guard.

He can’t get to the rim.

You’ve probably seen these kinds of phrases thrown around as long as you’ve watched the NBA, and for good reason. Lead guard/primary ball-handler play is pretty essential to good offense.

Driving the ball, getting to the rim, collapsing the defense and forcing a defensive rotation/help at the rim with a well-timed pass to the vacated spot where the help came from (or an even more ambitious pass to where help is coming from next) are staples of modern offense in the league.

Ja Morant, Luka Doncic and Trae Young are three of the idyllic rim-pressure threats in their own variations.

Morant is the absurd downhill athlete with incredible at-rim pop. Defenses sell out to stop him from even nearing the paint. Doncic (No. 2 in the league in drives per game) breaks down his man with strength, rhythm and angles

Young is a pull-up artist with a type of guile in his movements that forces overplays on the exterior, and he uses it to his benefit, gliding to the paint and utilizing one of the best floaters in the league (also disguised as a lob!) to punish the defense. Young takes the least shots at the rim of the three, but getting there is not an issue in the slightest, and he's worked his game to use his touch and shiftiness to his advantage.

All three are varying levels of passers ranging from very good to preternatural, but the point remains that their differing gifts, along with their honed craft, are the perfect catalysts for destructing defenses.

What about the guards/ball-handlers who are imperfect though? I'm not sure I've been more interested in such a thought than I have been this season.

Darius Garland, a player whom many draft analysts wondered if he could get to the rim enough, just makes it work. Prolific pull-up shooting, a phenomenal handle and stellar court vision allow him to work around his own at-rim struggles. He gets to the rim and to the paint with regularity, but due to his lack of verticality, finishing there isn't his forte. Drop-offs, dump-offs and well-placed and disguised lobs in tandem with his floater (in the same vein of Young) formulate the ability to set up his fantastic array of lob partners.

Part of what makes this work for Garland is how sneaky he is with his interior game. Everything he does is lightning quick, often even taking his bigs by surprise (I swear at least one-third of his turnovers are bobbled passes that shock the recipient). Quickness, pace and timeliness.

First off, this pass is freakin sick. Second, this is a great (albeit exaggerated) microcosm of what makes Garland so effective: the defense is always guessing. He's always pushing and probing and again, the defense is on its heels as he keeps the pressure on making it look like he could score. If stifled, he's superb at moving the ball, moving himself with quickness and then making himself available for the ball again as soon as possible. He's like a hornet, constantly stinging with an absurd work rate that's so difficult to keep pace with as a defender.

The aforementioned three questions have been asked over and over again this year in regard to Immanuel Quickley and his ability to lead an offense. They're the same questions that were asked when he was drafted.

By definition, Quickley IS a combo guard. He is not Garland, as he lacks the same handle and playmaking ability that made the Cavs' maestro a first time All-Star, but through that same lens, there are some comparisons that can be drawn.

Three-and-a-half of these long-distance tries per game are pull-up threes (shooting 41.4%), forcing defenses to prioritize his jumper and consistently forcing his defender to go over on ball-screens he runs.

One of my favorite and the most encouraging things: He is becoming quite cunning at grifting for fouls (a gift), averaging 4.8 trips to the line per game after the break. He's eighth in percentage of points derived from free throws in that time frame, actually ahead of RJ Barrett, who has been putting work in at the line.

He's so good at snaking, using his body to wall off his man and baiting him into contact. He has a real knack for selling fouls while also deserving them if that makes sense, even if it is grifty! This is an awesome development and legitimate way to buoy his offensive game.

Quickley is shooting 45.0% from 4 to 14 feet over that span (30% of his total shots), a large portion of his offense. The floater is essential for him. Much like we've seen with Bruce Brown in his ebbs and flows, the floater diet is a tough one; if it's not falling, the defense will adjust accordingly. But, if it is at a high clip, it puts the defense in a quandary. It is just a really hard shot to NOT contest even if it typically has less inherent value than a layup in theory.

Quickley is a good passer, not a great one — an important distinction. Ideally, he's not your best playmaker on the floor. I would honestly love to see him be more aggressive in some of the reads he makes. He'll make really good quick decisions, but he can be rather safe with the ball at times. He doesn't have the typical downhill burst of a primary ball-handler who will fully break a defense, but the quickness and timing of the passes he does make — due to the gravity he commands as a pull-up threat out of pick-and-roll — can allow him to imitate some of those looks.

Since the All-Star Break, Quickley is averaging 8.3 potential assists, accounting for all passes that lead to a shot attempt regardless of a make or miss. That puts him in the same ballpark of Jimmy Butler (8.2), DeMar DeRozan (8.6) and Julius Randle (8.5), all players with a significant usage and substantially higher minutes played than Quickley. That's not to say that he's a better scorer or playmaker, but rather to illustrate that he's doing more than the assists might indicate at face value.

This possession is such a great encapsulation of what Quickly brings offensively.

RJ Hampton sells out for the Quickley stepback three. Quickley makes a really quick outlet pass to Obi Toppin in the slot and moves himself immediately.

A quick pause: YES. This is so huge; the relocation and constant movement. A great way to offset the lack of other primary skills is to push the tempo — always moving, always scanning and always relocating after you're out of an action. If you immediately make yourself available after the ball leaves your hands, you can put some added strain on a defense. Simple, but very effective. (This is something Tyrese Haliburton is great at.)

Yes, the initial dent Quickley puts in the defense might be lesser than that of a true primary, but with a good offensive ethos and the principles laid out, we've seen the ability for some really solid offenses to live on continuous advantage creation and maintenance.

Quickley gets far enough in to draw Devin Cannady over in a help scenario before kicking to Barrett for the corner three. I don't have a "for sure" answer, but it feels like if Quickley is able to get another step into the paint with even more of an at-rim/floater sell, perhaps he puts even more of a dent in the defense. I'm nitpicking, but it's also important to note that this is just a harder way of life as an offensive player. If Cannady is actually a wing-sized player guarding Barrett, it's a shot that's much easier to contest.

With Robinson in the dunker spot, Robin Lopez is rather frozen, and on the IQ fake, he immediately seeks out Robinson's body to prevent the lob or box him out on a shot attempt.

There are subtleties in pacing Quickly can improve upon (he's already shown great signs of growth) that could make him even more impactful. Pairing him with lob partners like Robinson and Jericho Sims makes his floater and the threat of it that much more impactful, as he starts to work on masking his shot and pass to mimic one another. Sims' screening has been very fun to see work in tandem with Quickley as well; he's easily the best screener on the team that isn't IQ.

Per Cleaning the Glass, the Knicks' offense scores 5.3 points per 100 possessions more with Quickley on the floor. Yes, on/offs are extremely finicky and New York's awful starting unit plays a huge part in this sizable differential. Yet, that's also part of the point, no?

When IQ is on the floor, the Knicks actively seek more opportunities in transition and push more off of live rebounds. Truly, they just move quicker and with more purpose, something that's been a real issue for this Knicks team. The young guys play with pace, actively relocate, make quick decisions and continue to exploit advantages.

Barrett is the power wing that was promised, currently in the midst of his own breakout with high usage. In some ways, tasking IQ and Barrett with overlapping usage and quasi-primary creation together could be (and has been) a boon. RJ is one of the best in the league at getting to the rim (the finishing deserves its own article), and the pair together can mask some of its offensive flaws/inefficiencies. Both can start sets, both can capitalize upon advantages, and both are still feeling out their own abilities as creators.

Per Cleaning the Glass, lineups with Quickley and Barrett that don't feature Randle are outscoring opponents by 4.8 points per 100 possessions (747 possessions total, a solid sample). This is not intended as a refrendum on Randle; it's just a case in point when looking at who is commanding usage on the court.

Quickley doesn't get to the rim with regularity, but he does things that can emulate lead guard play. It's a harder diet to survive on, but so is *checks notes* everything else the Knicks have tried this season. He's shown enough encouraging signs that he can thrive.

It's been time for the Knicks' front office/Tom Thibodeau/whoever the heck is in charge there to prioritize Quickley and his ability to elevate the offense — and with hope, that's what they'll do this offseason.