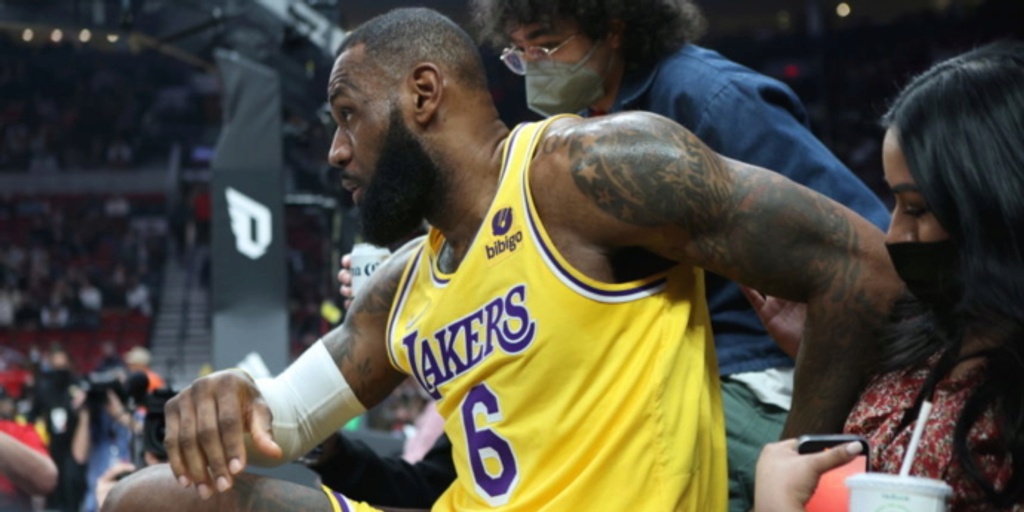 How the Lakers managed to turn a contending team into a sub-.500 mess

After the Los Angeles Lakers were embarrassed by the Milwaukee Bucks at home on Tuesday night (before Los Angeles lost to a bad Portland Trail Blazers team missing half their roster), a reporter asked LeBron James how his squad stacks up against Milwaukee and the league's other elite teams.

LeBron gave a surprisingly candid response: "We ain't on their level."

When asked if he believed the Lakers could eventually reach the Bucks' level this season, James replied, "Where they are right now? I don't know. Do I think we can reach the level where Milwaukee is right now? No. Is that what you want to hear from me? No. We can't get to where they are right now. They're the defending champions for a reason and I guarantee you if you would've asked teams coming out of the bubble if they could get to the level that we were playing at when we won a championship, they would've said the same thing."

Let's flashback to the championship group for a second, shall we?

It may seem like it's been 16 years or so since LeBron led LA to a title in the bubble, but, incredibly, it's been less than 16 months. The Lakers beat the Miami Heat in Game 6 of the Finals on Oct. 11, 2020. The team's two cornerstones, Anthony Davis and LeBron, remain, but the rest of the rotation has been turned over completely.

So, how did this team go from raising the Larry O'Brien trophy, to being four games under .500 and fighting for a spot in the play-in tournament just a year-and-a-half later?

Let's break it down.

In the offseason following their championship, LA's major move was trading Danny Green (a significant two-way contributor on their title team) and LA's 2021 first-round pick (Jaden McDaniels) to the Oklahoma City Thunder for Dennis Schroder. That summer, LA re-signed Kentavious Caldwell-Pope (three years, $39 million) and used its cap space to ink free agent Montrezl Harrell to a two-year, $18.9 million contract. They also brought in Wesley Matthews and Markieff Morris for the veteran minimum and inked Marc Gasol to a two-year, $5.3 million deal.

In mid-March, in the days leading up to last season's trade deadline, the Lakers were cruising. More than halfway through the 2020-21 campaign, the Lakers' were 15 games above .500 and owned the league's second-best record at 28-13.

At that point, the Lakers made a decision that would come back to haunt them. Hindsight is 20/20, of course, but the Lakers arrived at a fork in the road and chose the wrong path. They've been headed downhill ever since. (Over the past 11 months, the Lakers are 43-51 in the 94 games they've played).

On the eve of the 2021 trade deadline, the Lakers and Toronto Raptors were engaged in serious discussions on a potential deal that would have sent Kyle Lowry to LaLa Land, giving LeBron and Co. the established veteran point guard (and proven winner) the team desperately needed. The Lakers and Raps reportedly were close to finalizing a swap sending Schroder, Caldwell-Pope and some draft capital to Toronto in exchange for Lowry. Yet, in the hours right before the deadline arrived, "the sticking point was the inclusion of Talen Horton-Tucker," according to Jovan Buha and Bill Oram of The Athletic.

"Rob Pelinka, the Lakers' vice president of basketball operations, insisted that price was too high for the 35-year-old Lowry, and that he was not willing to trade Horton-Tucker, the 20-year-old combo guard who has emerged as a valuable rotation player for the Lakers in his second season," Buha and Oram reported.

Looking back, it's impossible not to wonder how the future of several franchises might have changed if the Lakers had been willing to pony up for Lowry, who is now averaging 13.0 points and 8.1 assists per game for the Heat. This is the same Heat team that is poised to enter the All-Star break with the best record in the Eastern Conference.

As we know, the Lakers stood pat at last year's deadline and would struggle mightily in the six subsequent weeks. Over a 25-game stretch from mid-March through the first week in May, LA posted an 8-17 record.

The Lakers would eventually be eliminated in six games by the Suns in the first round of the 2021 playoffs. Anthony Davis returned to the Lakers' starting lineup in Game 6 after missing the second half of Game 4 and all of Game 5 due to a groin injury, but logged just five minutes before limping off the court. It was the first and only time in LeBron's career that he lost a first-round series (he had been 14-0).

"What matters to me is getting this team back healthy," James told reporters after the loss to Phoenix.

Well, as it turns out, Pelinka and James were unwilling to run it back with the same squad and hope the group would avoid injuries.

Instead, the Lakers rolled the dice, agreeing to one of the most dramatic and controversial trades in recent NBA history.

On the evening of July 29, both Woj and Shams reported that the Lakers had consented to take on Russell Westbrook (and his onerous contract).

A week later, the trade was officially announced. LA had traded away Kentavious Caldwell-Pope, Montrezl Harrell, Kyle Kuzma and the draft rights to Isaiah Jackson (whom the Lakers had selected with the 22nd overall pick in the 2021 NBA Draft) in exchange for Russ and several future second-rounders.

The justification from the Lakers was that they viewed Westbrook as an offensive powerhouse that could lighten the load LeBron had been forced to carry.

Shockingly, despite advanced analytics that confirmed he was a near-perfect fit playing alongside LeBron, the Lakers decided not to bring back Alex Caruso, who had excelled as a role player in LA. Caruso's aggressiveness and versatility on the defensive end, as well as unselfishness on offense, made him an ideal wingman to AD and King James.

Still, as he explained on JJ Redick's "Old Man and the Three" podcast back in November, Carouso had hoped to re-sign with the Lakers and was even willing to give them a hometown discount. Before ultimately accepting the offer he received from Chicago (a four-year, $37 million contract, though the final season only carries a $3 million guarantee), Caruso said he and his agent "went back to L.A., asked if they could do the same, they said no. We asked for something else that was a little bit less; they said no."

As it turns out, the concerns many critics envisioned over the summer related to potential issues arising from the addition of Westbrook have reared their ugly head. Unfortunately for Los Angeles, Westbrook's declining athleticism has hamstrung the former All-Star.

At various points this season, Westbrook's alarming regression has been uncomfortable to watch. In the closing minutes of LA's victory over the New York Knicks last weekend, Russ found himself alone in the corner and as he was about to launch a three-pointer, the home crowd screamed at him not to shoot. Coach Frank Vogel yanked him out of the lineup in overtime vs. New York. In the Lakers' embarrassing loss to the Bucks on Tuesday, Westbrook was benched for the final 14 minutes of the game, including the entire fourth quarter. Russ sat out Wednesday's loss to Portland with a "lower back" injury.

His counting stats on the season are solid (18/7/7), but the peripheral numbers are putrid, and his plus/minus is the worst on the team. This season, the Lakers have been outscored by 123 points with Westbrook on the floor, whereas they have outscored their opponents by 35 points with Russ on the bench.

The situation has careened toward rock-bottom this month. Over the Lakers' last four games, Westbrook is shooting just 27% from the floor, 15% from downtown and 55.0% from the free-throw line. He's also leading the league in turnovers.

Yet, now that the 2022 trade deadline has passed, we know that Lakers fans have no choice but to hope Russ can somehow locate his confidence and contribute to winning.

It has been rumored this week that the Houston Rockets were willing to trade John Wall to the Lakers for Westbrook, but Pelinka was reportedly unwilling to include LA's 2027 first-round pick, which Houston was demanding. Will the decision come back to bite LA, as refusing to include THT at last year's deadline did? Even if Wall failed to live up to expectations, would it have amounted to addition by subtraction?

Although Monk has been fantastic, and Melo has given LA as much as they could have hoped for, Howard, Ellington and Bazemore have failed to deliver. Ariza is averaging 4.2 points while shooting 36% from the floor. Rondo is no longer on the roster. Nunn, hampered by a bone bruise in his right knee, has yet to log a single second in an NBA game this season. Horton-Tucker is converting career-lows from the floor (41%) and behind the arc (27%). Despite playing nearly six more minutes per game, THT is averaging fewer assists this season (2.7) than he did in 2020-21, while still committing 1.5 turnovers a night.

Sum it all up, and you see why the Lakers have lost more than half of their games and find themselves in ninth place in the West, despite LeBron authoring the greatest season in NBA history by a 37-year-old.

This is a particularly bitter pill for Lakers fans to swallow considering the team purportedly had several different options to choose from this summer when shopping around their Kuz/’Trez/draft picks package, including a deal for Sacramento sharpshooter Buddy Hield. In that scenario, the Lakers could have held onto KCP and added Hield, and the combined salary of both players still would have been $8 million less than Westbrook's cap hit of $44.2 million.

To be fair, it's worth noting that in 2020-21, Westbrook played his best basketball of the season after the All-Star break. Over the Wizards' final 35 games of the season, he averaged 23.3 points, 13.3 rebounds, 13.4 assists and 1.5 steals, while shooting a respectable 44% from the floor, 32% from behind the arc and 72% from the FT line. Washington closed the regular season by going 17-6 over their final 23 contests and advanced to the playoffs.

Will Russ and his teammates feel less pressure now that the deadline has passed? LeBron and the Lakers don't need Westbrook to dominate the ball and chase triple-doubles, but they do need him to focus on playing the best defense of his career and help facilitate the offense, especially when James needs a breather.

If Russ cannot shake out of his slump, LA will have a very tough time getting back on track and achieving the goals they set for themselves back in October.

And if Los Angeles fails to right the ship (wasting a year of "Prime LeBron" in the process), the team's fans will look back with rage on the terrible trades and free-agency failures over the past 12 months that led to the Lakers' demise.