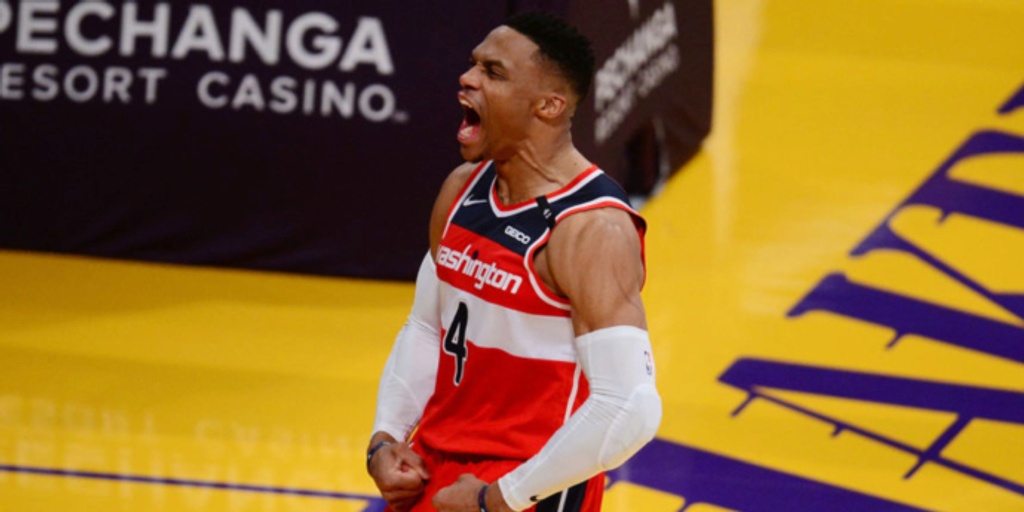 Russell Westbrook is now a Los Angeles Laker, becoming the latest star who will don the purple and gold.

Thursday night's biggest trade featured the Washington Wizards sending Westbrook and two future second-round picks to the Lakers in exchange for Kyle Kuzma, Kentavious Caldwell-Pope, Montrezl Harrell and No. 22 in the 2021 NBA Draft (which was later traded for Aaron Holiday and Isaiah Todd).

There had been rumblings that the Lakers' top priority this offseason was adding a veteran point guard (which is why they were also linked to Chris Paul, Kyle Lowry, etc.). Now, Westbrook fills that need.

Once Westbrook met with Anthony Davis and LeBron James at the latter's house two weeks ago, Los Angeles zeroed in on the nine-time All-NBA selection. The trio discussed the possibility of teaming up and what kind of sacrifices would be neccessary, according to Broderick Turner of the Los Angeles Times.

"Westbrook let James and Davis know he doesn’t mind playing off the ball when James initiates the offense, something he did while playing alongside James Harden with the Houston Rockets... Westbrook talked about how his only intention was winning and coming back home to Los Angeles to become a champion."

As a kid in Los Angeles, Westbrook was a Lakers fan and his favorite player was Magic Johnson. He has said that his parents were even bigger fans of the Lakers than him.

The former MVP will earn $44,211,146 this upcoming season, and he has a player option for $47,063,478 in 2022-23. Because of his large contract, Westbrook hadn't been mentioned in many trade rumors as of late, so these talks were somewhat surprising when they were initially reported.

Westbrook and the Wizards got off to a slow start last season; however, he got much more comfortable after the All-Star break, lifting Washington into the playoffs by averaging 23.6 points, 13.1 assists, 12.8 rebounds and 1.5 steals. He looked like Vintage Russell Westbrook late in the season, breaking Oscar Robertson's career triple-double record (182) and recording 27 triple-doubles in 34 games.

The Lakers now have two players who rank top-five in NBA history in career triple-doubles – Westbrook is first (184) and James is fifth (99).

In order to improve their depth, the Lakers will likely look to sign veteran free agents who want to chase a ring and play in L.A. DeMar DeRozan has been mentioned as a possibility since he's from Compton and has said that his top priority in free agency is joining a contender. However, it remains to be seen if he's willing to take a significant paycut (since L.A. has no cap room). Carmelo Anthony, Rudy Gay and Reggie Bullock have been brought up as some other potential targets.