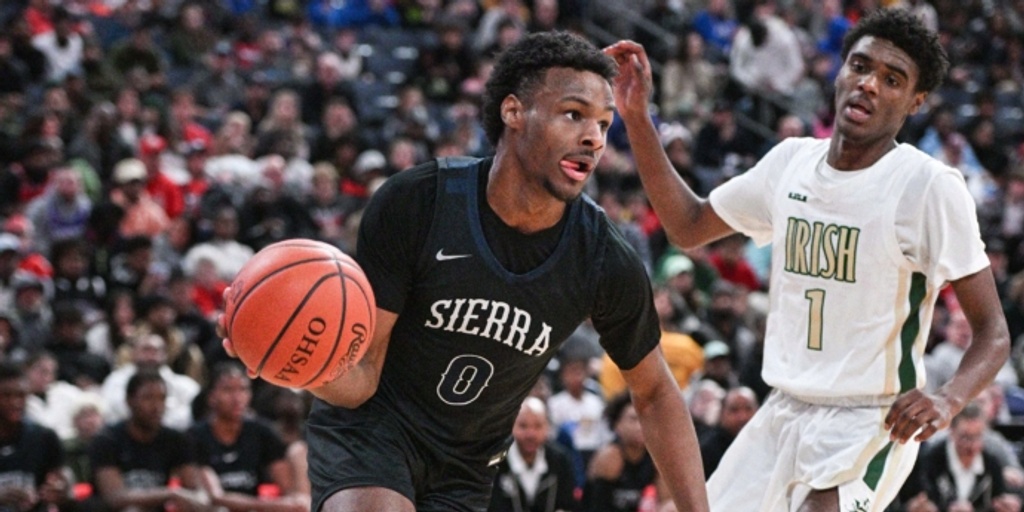 I checked into the arena at 9 a.m. and watched all five contests. These standouts, among many others, caught my eye:

Zoe Brooks, St. John Vianney — The ninth-ranked senior in the country put on a show with a monster 25-point, 14-rebound, 10-assist triple-double. Brooks played decisively and confidently, never over-dribbling or wasting shot clock. She tossed a few high-level dimes from the perimeter right through the Newtington defense for cutting layups.

"I'm just waiting for somebody to get open," Brooks told Basketball News postgame. "We move a lot without the ball; obviously [after] three or four cuts, somebody's gonna get open eventually."

When Brooks did decide to score, she slashed past defenders and was unfazed by contact. She explained that developing her power drives has been a taxing process involving difficult bungee and medicine-ball workouts as part of her lifting and strength training routines.

"I lift a lot. This offseason I lifted a lot, so I think I got a lot stronger to take contact whenever I drive," Brooks said. "I do a lot of agility work and footwork to help me."

Those sessions are paying off in high school and will continue to in college when Brooks joins NC State.

Billy Richmond, Camden —Based on the final score, you wouldn't notice that Aaron Bradshaw spent much of the game in foul trouble and DJ Wagner struggled to make shots away from the basket. Camden still rolled to a win because other contributors like Richmond shined in big moments.

The 6-foot-7 wing led his squad with 18 points, added 5 rebounds and made both of his three-point attempts. He says he watches a lot of Paul George and studies how the Clippers star slides between on-ball and off-ball prowess.

"[My coaches say] just be aggressive and attack the defense," Richmond said. "[Wagner and Bradshaw] are doing their part, which makes the defense act a lot on them. So it just makes me flow more."

Richmond's highlight moment came with one posterizing dunk in transition; he even cut his wrist on the rim from throwing down too hard. After sitting for a short spell on the bench, he came back and added another unassisted driving score.

Wagner and Bradshaw rightfully take a lot of the defense's focus, allowing Richmond to capitalize on his advantages and show off his versatile game. He credits his competitive friendship with the two for helping build his status as a 3-star junior.

"We always compete, and I feel like in practice, they make me better and I make them better," Richmond said.

Dasear Haskins, Camden — Bradshaw picked up his fourth foul early in the second half and Haskins had to step in and play major minutes in his absence. The senior wound up with 15 points, 12 rebounds and 3 assists off the bench, outhustling a smaller Bishop Gorman team on the glass and logging a pair of timely blocks. He's a really powerful attacking player and that should lead to success when he does pick his college path.

Tune in live on ESPNU 🏀🚨 pic.twitter.com/K8LNXzUdgM

Cameron Boozer, Christopher Columbus — After dominating Saturday against San Ysidro, Boozer ran into a tougher physical matchup against Sierra Canyon. The superstar sophomore still managed to rack up 18 points, 13 rebounds and 4 assists, and was the vocal leader for Christopher Columbus in its comeback victory.

Boozer challenged his team to be physical and even gestured for teammate Malik Abdullahi to "play big" while they waited to rebound a free throw before their final possession. Abdullahi would go on to score the winning put-back layup with three seconds left.

"[Physicality] was super important," Boozer said. "They're a team that crashes really hard, they're physical, they're big and strong, so for us to play physical is a huge thing."

Boozer was more of an interior presence in this contest and only shot 2-of-7 from beyond the arc, but his makes looked cool and comfortable. It's impressive to see his play style adapt to the opponent and result in two wins.

Cayden Boozer, Christopher Columbus — Cameron had the bigger stat line, but Cayden Boozer's 11 points, 7 rebounds and 3 assists felt huge in the context of the game. He faced off against a tough Sierra Canyon guard rotation that included Bronny James and Isaiah Elohim. Boozer said facing that competition forced him to play smarter.

"The pick-and-roll really worked for me, especially trying to get that switch or just a little bit of an advantage," he said. "Those two guys are really good defenders, so I just had to try to confuse them a little bit and get to my spots."

Amidst those scores was a neat layup off of a spinning drive that got a deserved response from the crowd. Boozer splashed his lone three-point attempt while using a screen from his brother. At this point, their two-man synergy is natural, and they create easy chances for each other.

Isaiah Elohim, Sierra Canyon — A 5-star shooting guard, Elohim turned on the heat when Sierra Canyon needed him to create as a scorer. He ran out in transition and finished off push-ahead passes from Bronny James. He slithered around in the half-court for mid-range pull-ups and hit a corner three off another James feed. Though he was 7-for-14 from the floor, Elohim was the only Sierra Canyon player to shoot over 50% on more than two shot attempts. He ended with 16 points.

Bronny James, Sierra Canyon — This matchup was a super intriguing mixed bag for the most popular player in the tournament. James scored 13 points on 17 shots and went just 1-for-9 inside the arc (and 3-for-8 on threes). He tried to score aggressively and though he could create space for himself on drives, he struggled to get all the way to the basket and finish.

At the same time, James was spectacular as a passer. His three assists harshly undersell how many needles he threaded to hit shooters and inside scorers. James wrapped this laser of a one-armed pass through two defenders in transition that went unrewarded. His active hands on defense also allowed him to aggressively guard the arc and jump passing lanes, leading to five steals. This was not the takeover game the Springfield crowd probably wanted, but it was nonetheless a fun outing to watch.

Liam McNeeley has one of the prettiest shooting strokes in the high school game. Great size at 6’7” / 6’8”. Stretch four big with a lot of skill. pic.twitter.com/qK2s5OlePn

Liam McNeeley, Montverde — Practically every member of the Eagles' rotation had at least a few standout moments. McNeeley was most impressive for how he created advantages off the dribble and made high-level passing reads as a 6-foot-6 wing. The 5-star junior picked up eight assists against one turnover with his 10 points.

His first step is legit, but he rarely drove into bad traffic without then hitting the appropriate cutter or shooter. McNeeley only shot 2-for-6 from the field (all threes), but he's proven himself as a perimeter threat throughout the weekend. He's one of the more fascinating fits on Montverde's loaded roster.

Miro Little, Sunrise Christian — Little helped Sunrise Christian rally to keep this game competitive with 17 points on 7-of-9 shooting, including 3-of-5 from distance. The Baylor-bound point guard hit some quality shots off of movement when Sunrise Christian was able to settle into its offense. He's strong for his size and held his own against a big Montverde squad. Baylor's had a lot of recent success with its guards and Little seems like a perfect addition to the trend.