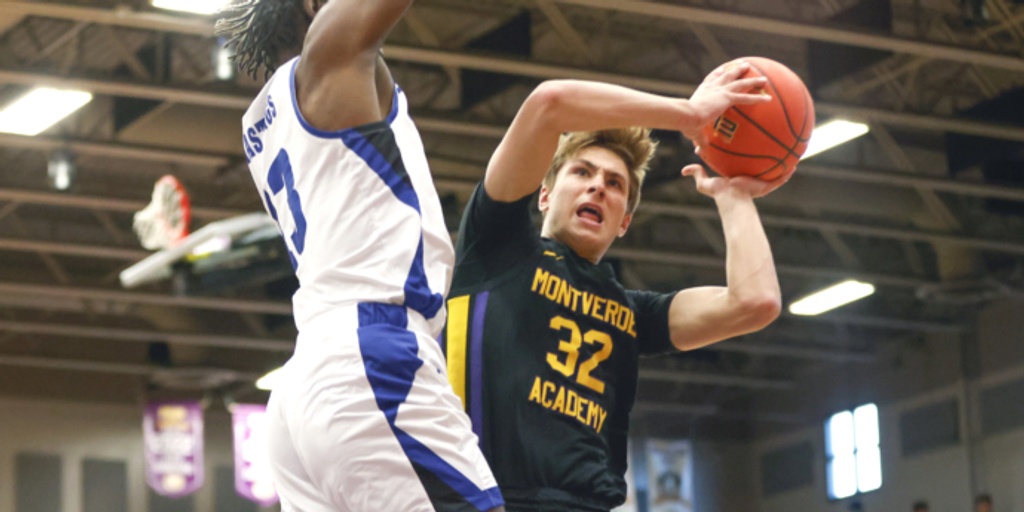 I checked into the arena at noon and spent 11 hours inside, sticking around until the penultimate contest. These standouts, among many others, caught my eye:

Khani Rooths, IMG Academy — A 2024 wing, Rooths' impact on IMG's win far outshone his box score (11 points, 9 rebounds, 6 assists). The 6-foot-6 wing kept the ball moving with some savvy passing versatility, making the right skip reads and interior decisions. He went 2-for-3 beyond the arc and seemed more comfortable spotting up and passing from a standstill versus attacking off the dribble.

Rooths also defended Newton star Stephon Castle for large portions of the game and made the 5-star guard's life pretty challenging. He can slide with relative success and deal with physicality without fouling. Rooths, a 4-star guard who is uncommitted, fits in all sorts of contexts and is a player who can thrive with today's direction of basketball.

Marcus Whitlock, Newton — Whitlock was one of the early head-turners of the weekend. He's a 6-foot-2 guard who plays with relentless confidence. The senior only made 4-of-12 threes but looked poised shooting off movement and spot-up attempts, finishing with 22 points.

He's not a half-court creator, but Whitlock did get chances to run and finish at the rim in transition. He also dove for loose balls on defense and wound up with three steals. Whitlock isn't ranked by most sites and hasn't chosen a school yet, so this effort might have put him on some college radars.

The legend of Juju Watkins at Sierra Canyon continues to grow, as well.

She missed a big stretch of the first half after tweaking her ankle, went down for a few moments again late on, and still put up 29/14/5/3/3 in 26 mins. Her physicality never wavered either. Generational. https://t.co/VGuq1TuqcT pic.twitter.com/wVUIgv0fHd

Juju Watkins, Sierra Canyon — The No. 1 senior in the country had the performance of the day. Watkins missed time twice with injuries to both ankles, but you wouldn't notice from her final stat line: 29 points, 14 rebounds, 5 assists, 3 blocks and 3 steals. (She said postgame that she's feeling alright).

Watkins relished the chance to beat another nationally-ranked opponent and the challenge of matching up against 6-foot-1 junior Kendall Dudley.

"It's definitely an adjustment playing against other players my size, learning how and when to get to my spots," Watkins told Basketball News in her postgame presser. "I just had to make that adjustment mentally, but when I made it, it was easier."

Though Watkins battled for rebounds and showed off limitless range, she also demonstrated a unique blend of speeds and gears, often warping time around her defenders and finishing with a teardrop floater. That's one of the young star's newest weapons.

"I worked on it a lot this summer — just learning how to change pace better and get my defender on their heels. I've been working on that a lot, and I went out there and showed it today," Watkins said.

Mackenly Randolph, Sierra Canyon — The 5-star junior finished with 22 points and 14 rebounds and was critical in helping Sierra Canyon close out a 67-55 win. Randolph dominated on the glass against a physically imposing Sidwell Friends squad; it's no surprise that her dad is Zach Randolph. She also slashed through the lane for some impressive interior buckets.

Kendall Dudley, Sidwell Friends — Dudley is the No. 13 player in ESPN's 2024 rankings and she showed off the versatility that earned her the billing. The 5-star talent was cool and collected driving the basketball and kicking out. She can play physically at 6-foot-1, but doesn't need to, and her comfort off the bounce was apparent. She also led the defensive attack and did about as well guarding Watkins as her team could ask.

Dudley hasn't chosen a college yet and should be one of the most highly-anticipated commits in the coming year. She finished with 15 points, 10 rebounds and 3 steals in the loss.

Jayden Reid, Long Island Lutheran — A 5-foot-10 playmaker who shined is going to land on this list all day. Reid, a 3-star senior point guard, showed total command of the offense with wraparound dimes and pocket passes in the pick-and-roll. He knocked down a pair of threes and finished off one fast break with an impressive double-clutch layup. The guard play from both squads was really excellent, but Reid stood out with 16 points, 7 assists and 4 steals.

Kaden Magwood, Oak Hill — Magwood caught fire off the bench, going for 22 points on 9-of-13 shooting. He made both of his threes and finished a stunning layup on the fast break to help keep Oak Hill in the game. Magwood is only a sophomore and not in the early class frontrunners yet; I expect that to change pretty soon. He plays with a ton of fight for a guard listed at 6-foot-2 and 160 pounds.

Cooper Flagg is that guy 😎 (No. 2 ESPN 25) put on a show in Montverde’s 85-63 win over La Lu @MVABasketball @CooperFlagg pic.twitter.com/VGOxQpkMy7

Cooper Flagg, Montverde — It's remarkable how polished Flagg plays despite being just a sophomore and in his first year with one of the most successful programs in the country. Flagg had 21 points in 25 minutes on 8-for-10 shooting (3-4 3PT). The shots came in all types: cutting via baseline out-of-bounds plays, spacing the floor in the corner and initiating the attack himself.

Then you add the defense, which included five steals and a few ticky-tack fouls that could have been blocks. Flagg is aware and active on both sides of the ball, and it's easy for him to string productive plays together regardless of whether he's getting buckets.

Flagg certainly matched the hype as one of the top players in the 2025 class. After leaving his hometown Nokomis High in Maine and transferring all the way to Florida, he's fit right in with the Eagles. He said approximately 100 friends and family made the four-hour drive down to western Massachusetts.

"I think it's kind of similar to my team back in Maine. We all trust each other. I think that's helped to elevate me too, is playing at the highest level and having a team [where] everybody trusts each other," Flagg said after his performance. "We know that every night it's gonna be someone else [stepping up]."

KJ Evans, Montverde — The Oregon-bound senior quietly worked his way to 19 points, 8 rebounds and 4 assists, but punctuated his effort with a powerful putback slam. Evans found most of his success around the basket and demonstrated syngergy with Flagg and other playmakers when cutting. The 5-star forward thrived in his role as Montverde tore apart La Lumiere with its decisive passing.

Off the screen. A little head fake frees up Jared McCain for a deep 3ball. It’s his fifth 3 of the night. Corona Centennial leads Camden (NJ) 50-45 after three quarters. pic.twitter.com/me3L1dEpYo

DJ Wagner, Camden — It is all-but impossible to stop Wagner at this level when he bombards the basket. The 5-star senior slithered his way through space and sliced open double-teams with jump-stop attacks, finishing with 27 points. Though he struggled to shoot it from outside, his craft and touch around the rim are superb, and his functional strength is light-years from when I first got the chance to watch him at HoopHall as a freshman.

Wagner will team up with fellow 5-star classmate Aaron Bradshaw (15 points, 8 rebounds) at Kentucky, and he's excited to keep the momentum rolling with his 7-foot teammate.

"It's great. We've been playing together for a long time now," Wagner told reporters postgame. "Off the court, that's like my brother, so it's just fun to be able to go to the next level and play on the same floor with him in college."

Jared McCain, Centennial — McCain was money as a shooter and finished with 27 points, including six made threes. Centennial used him off of creative screening actions and as a spot-up threat, but the Duke commit also pulled up for a couple of self-created makes. He added an impressive driving layup and a fadeaway make from the free-throw line. A 4-star guard, McCain brought a really positive energy to Centennial's win with his confidence.

Cameron Boozer, Christopher Columbus — Boozer was the second top sophomore to look far beyond his years on Saturday. The son of Carlos Boozer, Cameron finished with an effortless 33 points, 15 rebounds, 5 assists, 3 steals and 2 blocks — and still showed displeasure with his squad's defense — as Christopher Columbus led wire-to-wire. His twin brother Cayden, a guard, also had 14 points, 7 rebounds and 7 assists.

Boozer is listed at 6-foot-9, 215 pounds online. He seems even more physically imposing in person. Yet he's not a bowling ball; Boozer calmly settled into three-pointers (3-for-5) and comitted just one foul while still battling around the basket.

"When I was younger, I got in foul trouble a lot swiping down," Boozer told Basketball News in his postgame scrum. "It's something I've learned: just stay vertical and contest guys so it's kind of tough to finish over me — using my size and my length to my advantage."

Boozer mentioned in the scrum that his favorite player is Anthony Davis, and he admires the Brow's full arsenal of two-way weapons.

"I feel like he can do it all," Boozer said. "He can rebound, he can pass, he can shoot it, he finishes well... When he's healthy, he's one of the best players in the league."