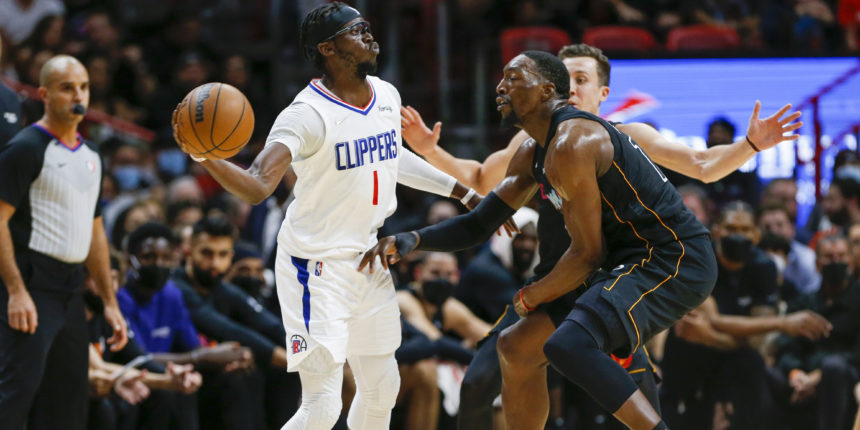 There are plenty of ways to skin a cat defensively.

Drop coverage can work if your screen navigators are slithery enough, and if your big can patrol the paint.

Switching can work if the blend of lateral quickness, strength and discipline across your personnel is strong enough.

More aggressive styles (hi, Milwaukee) can make offenses panic if the ball pressure is there, and also if the backline can rotate in tandem.

Zone can work if the communication and activity are in tune.

What do you have if you can do all of those things? Well, a team like the Miami Heat.

They absolutely popped during their 121-114 win over the Los Angeles Clippers on Friday night. I was in awe watching them toggle between multiple coverages depending on the situation. Shot clock. The players involved in the action. The location of the action.

It was poetry in motion.

You don't tap into this type of versatility without a strong foundation. The Heat have that thanks to their All-Star duo of Jimmy Butler and Bam Adebayo. Add in PJ Tucker, and you have the NBA's best defensive trio.

But Butler, Tucker and Adebayo? That blend of off-ball excellence, on-ball chops, screen navigation and the ability to punch above their weight against larger matchups? They're top-two, and I don't think they're two.

On the season, the Heat are allowing an absurd 88.1 points per 100 halfcourt plays with their versatile trio on the floor — a mark that ranks in the 90th percentile league-wide per Cleaning The Glass. When attacking the Heat in ball screens with the Butler/Tucker/Adebayo trio on the floor, opposing offenses are generating just 0.86 points per possession, per Second Spectrum.

In short: you're just not scoring at a high clip, if at all, with those three roaming around.

The Heat put on a defensive clinic in the first quarter of that game, posting a 73.1 defensive rating in the opening frame. A lot of that was their trio closing gaps quickly, or not allowing them to be pried open in the first place.

Let's take a look at three plays from that quarter to highlight how special these guys are.

Great defense isn't a filthy steal or a blocked shot sent into the 15th row, though they're obviously valuable (and super cool to watch). More than anything, great defense is the absence of something happening. You know what's better than a blocked shot? A shot that doesn't come.

Below, the Clippers flow into "Chicago" action — a pindown that leads into a dribble handoff. Reggie Jackson washes Duncan Robinson out with a great screen, but Adebayo and Tucker are able to switch and keep things in front.

The problem, though, is that Robinson is defending Ivica Zubac. Zubac isn't an elite post presence, but he's generated well over 1.1 points per possession when shooting out of a post mismatch (defended by non-centers) since becoming a full-time starter in 2019, per Second Spectrum.

Tucker recognizes the danger as Zubac attempts to establish position, and executes a "scram switch" with Robinson to flip the matchup. With Tucker in the fray, the possession dies thanks to miscommunication between Jackson and Zubac.

Continuing the theme of great defense being the absence of offensive opportunity, I present this possession. The Clippers try to attack early in pick-and-roll (with an empty corner!) but Tucker and Gabe Vincent simply switch the action.

Then the fun begins.

Zubac lifts to the three-point arc and receives a pass from Terance Mann. With Butler keyed in on Mann, Amir Coffey (playing well lately!) runs into a pitch from Zubac — essentially a variation of Blind Pig action. However, it goes nowhere because of a timely switch from Adebayo. From there, Adebayo shows why he's the best switch big in basketball.

If you do want to talk about the value of event creation, Butler's off-ball prowess is a great place to start. He's one of the best helpers in the NBA because of his blend of IQ and aggression.

You have to be aware of where Butler is, because he sure as heck is aware of what's going on with you. As the Clippers pitch the ball to Zubac to set up a two or three-man dance on the left side of the floor, Butler senses an opportunity. With Zubac's head turned, Butler blindsides him with a strip and score.

"I'm probably going to gamble any time somebody is trying to throw the ball into the elbow," Butler tells Heat reporter Brady Hawk (rising star in the business, follow him) during postgame festivities.

"Spo calls it 'timely gambling'; I'm a reckless gambler. My teammates know that I'm going to gamble, so even when I mess it up -- and I almost used another word — they're always there to rotate and then help me get back in the right position on defense. As much as I gamble, my guys are there whenever I do mess it up."

Luckily for the Heat, Butler doesn't mess up that often. Unfortunately for other teams, they aren't really able to capitalize when he does.

Stephen Curry's defense continues to shine for the Warriors
12h

2022 NBA offseason preview: What's next for the Phoenix Suns?
14h