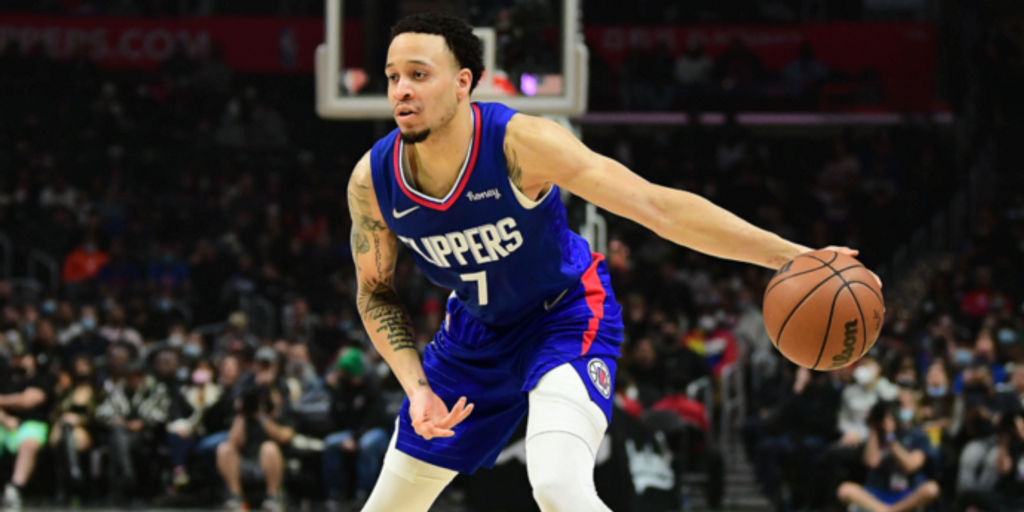 There's a lot going on with the Los Angeles Clippers right now. Zoom out, and you see a team one game under .500 due to its (super)stars being out of the lineup.

Zoom in, and you're likely riding a wave of euphoria or confusion based on what happened on Tuesday night. The Clippers were down as many as 35 points in the first half of their matchup against the Washington Wizards. It was a 30-point deficit by halftime.

Not only did the Clippers come back and win off the back of a four-point play from Luke Kennard, they very well may have broken the Wizards' fan base in the process. If you're religious, say a brief prayer for eardrums and vocal cords all across the interwebs.

What's going a bit under the radar this season is the play of Amir Coffey, an undrafted third-year wing from Minnesota.

(As a brief aside, I had a punny title for this piece playing off of his name before I remembered the Grand Theft Auto: San Andreas controversy. You're welcome, unless this note made you look up what that controversy was. In which case, I'm sorry.)

Coffey's per-game numbers may not stand out to you. He's averaging 7.6 points on solid-but-not-spectacular shooting splits. This recent stretch is more in line with "Hmm, what's going on here?" intrigue.

Over his last 10 games, all starts, he's averaging 13.8 points while converting 63.4% of his twos and 41.1% of his threes on nearly six triple tries per contest. Add in 4.0 boards and 3.1 assists, and you have a guy doing a little bit of everything in a secondary role for the Clips.

Coffey's been tasked with more responsibility than he's had in his NBA career recently, and he's thriving. Lost in the mayhem of Tuesday night's game — and the ranting afterwards — was Coffey having a career night: 29 points (7 of 12 from two, 3 of 9 from three), 5 boards, 2 steals and a block. He finished with one assist, though that isn't indicative of his passing chops or overall willingness to find guys.

You don't want to project forward based on the best game of someone's career, but last night was a snapshot of what Coffey's been doing under the radar this year — and especially this month.

We'll get the passing out of the way first. Coffey's a snappy ball mover with some craft. He's able to keep the chains moving when the defense is already bent. When tasked with creating something himself, he can make some better-than-you-think reads.

The lone assist he logged was an absolute dart. Sign me up for non-point guards that can fire skips to the corner with no hesitation.

Justise Winslow (#JustiseBetter) deserves a quick shoutout for flipping the angle of his screen to combat the Wizards trying to ICE this action. Coffey strings out the play a bit, reads the positioning and weight of Rui Hachimura, then slings a laser to Terance Mann while Hachimura is leaning towards the paint. The closeout is futile from that point.

As a scorer, Coffey can flow between on-ball and off-ball production. He had an off shooting night, converting just 2 of his 6 spot-up triples, but he's been reliable (38.3%) on those shots this season. His footwork is generally sound, allowing him to get shots off without much issue.

On the ball, Coffey pairs selective aggression with mid-range feel. His drive volume has been low this season, but he isn't afraid of contact. He's able to mix in power drives and more elusive finishes, depending on the context.

He often decides to cut his adventures short, flowing into pull-ups or floaters over the outstretched arms of big men. It's a nice counter to have against drop coverage; the Clippers are generating north of 1.06 PPP on direct plays against drop with Coffey as the ball-handler, per Second Spectrum.

That selective aggression also plays dividends on the non-glamour end of the floor. Coffey mixes in extreme ball pressure with a more lax style, allowing him to disrupt ball-handlers while also being in position to execute switches — important for a team that switches at a top-five rate this year. And when he does switch, his physicality allows him to punch above his weight.

Off the ball, Coffey is a mostly-sound rotator who can ramp up the activity if he senses panic. Steals aren't the only part of defense, but his pilferages from Tuesday night offer a nice window of the types of reads he can make.

In all, the Clippers have themselves another intriguing guy on the wing. Last year, it was Mann that kind of came out of nowhere. Coffey seems to have that same potential with a little more in the tank offensively.