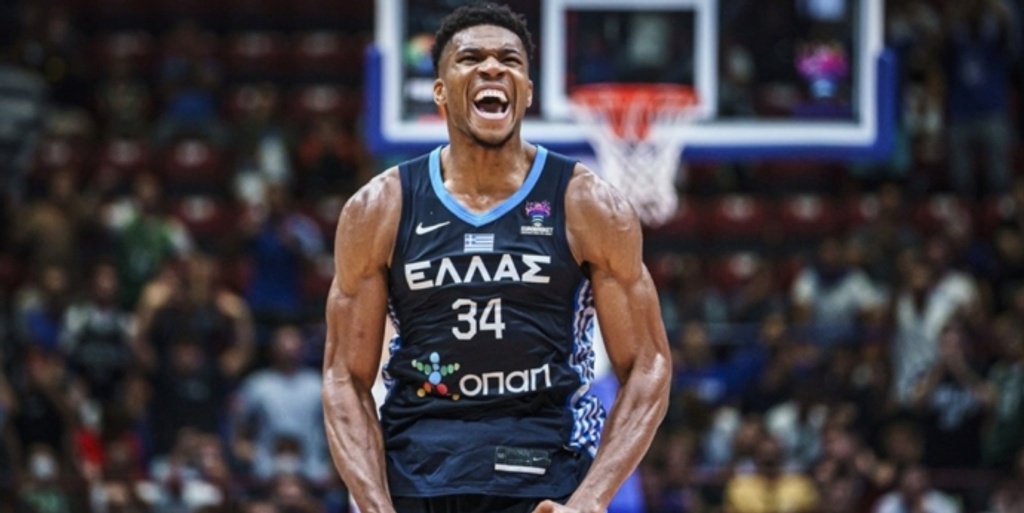 The following game recap was originally published on FIBA's official website. Check out their complete coverage of FIBA EuroBasket 2022.

MILAN (Italy) – Greece maintained their 100 percent start at FIBA EuroBasket 2022 by outlasting co-hosts Italy 85-81 in a compelling encounter that eventually went to the wire.

It showcased everything that is great about international basketball, great stars at their peak, battling one another intensely, in front of 11,742 fans at the Milano Assago Arena.

The Greeks began vigorously, their pressure defense amped to the max, and the combo of Giannis Antetokounmpo and Tyler Dorsey finding opportunities to build an early 16-7 lead.

After starting 0-for-5 from three-point range, Gigi Datome kickstarted an Italian revival from deep amid an 8-2 burst in the first - and despite an 11-3 Greek surge in the second, an ability to get to the foul line accelerated the home side within reach at 47-40 at the half.

Saturday night fervor was in plentiful supply in front of a capacity crowd sprinkled with basketball royalty in the shape of Spurs coach Gregg Popovich and an array of former charges including Marco Belinelli and Luis Scola.

They received a second half treat as the rivals danced and swayed back and forth, Greece up 14 in the third but then bombarded by consecutive threes from Simone Fontecchio inside a minute and then another from Achille Polonara.

The Azzurri were forced to scrap for every chances when their guests re-opened a double-digit advantage entering the fourth. This time, Greece had just enough breathing space to shrug off a late rally, inspired by Fontecchio and a small ball switch, that slashed the lead to just three with Stefano Tonut's attempt to force overtime with two seconds left missing its mark.

Turning Point: Italy never led but continued to find ways to respond to each Greek surge until late in the third when a 12-2 run broke their resolve. It began with two free throws from Giannis Antetokounmpo but when he immediately went to the bench, his colleagues seized the spotlight to build a 71-56 advantage that proved insurmountable.

TCL Player of the Game: Giannis Antetokounmpo was very much The Greek Freak, notching 7 of his game-high 25 points in a tone-setting opening period as defensive anchor and eventually adding 11 rebounds, 3 assists and 3 steals.

Stats Don’t Lie: Greece found efficient scoring, converting 27-for-60 and finding sweet spots under the basket and off screens to find open threes on the left, a mirror image of Italy.

Bottom Line: Greece is 2-0 following what were expected to be its two toughest games in Group C. There are still wrinkles to iron out before the transfer to Berlin. Italy, now 1-1, may need to nurse bruises before Monday’s meeting with Ukraine.

"I think if we fight, we're going to make mistakes every game. But if we fight, we keep battling, no matter if we're up or down. We just keep pushing - I think that's the goal. Because when we get down, when they make runs, that can be contagious. We've just got to keep our body language right and just keep fighting." - Greece guard Tyler Dorsey

“We remained competitive and that’s the good thing,. We refused to step back. We were always on the level of being very competitive, We had our good moments. Unfortunately the bad moments, Italy came back. They`re such a team. We prepared for that in terms of Italy playing small ball. They played ball out with great shooters in Melli and Polonara but we managed to control that with switches. We had our challenges with our system and our play with the big bodies out there but the forwards and guards did a great job.” – Greek head coach Dimitrios Itoudis

“I’m really proud of my players. We played so hard. But the best thing that we showed tonight is that we never give up. Probably another team in that situation, where we were in the third quarter, when we were a little bit tired, Greece  was playing great and I was a little bit worried. But my players showed me I had no need to be worried.” – Italy head coach Gianmarco Pozzecco