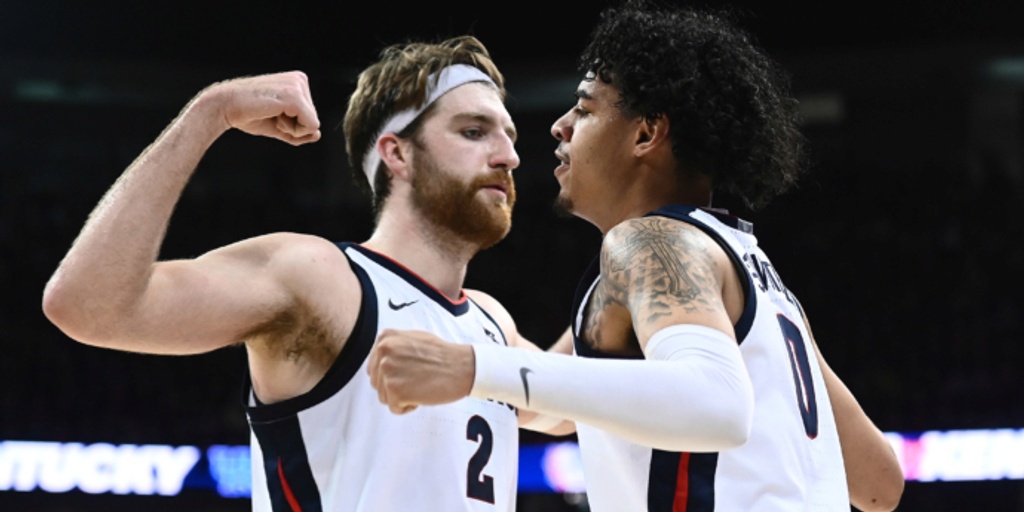 Gonzaga’s brutal slate continues with No. 6 Baylor up next

Gonzaga coach Mark Few always builds an ambitious nonconference schedule, helping not only harden his team for March but also to balance the Bulldogs’ weaker West Coast Conference slate when it comes to the NCAA selection committee.

They’ve taken their lumps already this season, losing to second-ranked Texas and fifth-ranked Purdue to fall out of the top 10 for the first time since February 2018. But the No. 14 Bulldogs also have marquee wins over No. 19 Kentucky and No. 20 Michigan State, the latter played on the USS Abraham Lincoln at North Island Naval Air Station in California.

Next up on meatgrinder: No. 6 Baylor on Friday night at the Sanford Pentagon in Sioux Falls, South Dakota.

Oh, and it just happens to be a rematch of the 2021 national title game won by the Bears in a rout.

“Every time I see Baylor playing,” Bulldogs guard Julian Strawther said, “I just kind of think to that national championship game. For sure excited to get out there and play against a great team on a neutral site. Those are the games that all great players want: two top teams, a bunch of great players. I’m super excited for it.”

It’s not as if the Bears, who face Marquette on Tuesday night, will have had an easy road to South Dakota, either. They lost to third-ranked Virginia in Las Vegas before knocking off No. 21 UCLA in the Continental Tire Main Event.

“(Baylor) is one of the most amazing stories in sports, from where it was — how low it could be, which is apathy plus all the stuff that happened there,” said Few, who has grown close to Bears coach Scott Drew over the years.

“He’s just such a positive person and force and that’s what his program is like,” Few said. “They really got, not a system but they recruit to what works at Baylor. Their perimeter players in the national championship game were terrific, the ones they have now are terrific. They have size inside. They’ve really got that thing going.”

The two conferences have split their challenge the past two seasons with each winning three during the pandemic-plagued 2020-21 season and five apiece last season, and there are some premier showdowns coming this week.

The three most significant come Thursday night, when seventh-ranked Creighton visits No. 2 Texas, eighth-ranked UConn plays host to Oklahoma State and Seton Hall travels to No. 9 Kansas. The final game of the conference showdown happens Sunday, when St. John’s faces No. 23 Iowa State at Hilton Coliseum in Ames, Iowa.

The Big Ten has won the last three editions against the ACC, and with six teams ranked in the Top 25 this week, they are favored to make it four in a row. Half of the 14 games on the docket involve ranked teams, beginning with No. 22 Maryland visiting Louisville, Syracuse heading to No. 16 Illinois and third-ranked Virginia visiting Michigan on Tuesday night.

The schedule for Wednesday includes No. 5 Purdue visiting Florida State, No. 20 Michigan State heading to Notre Dame and No. 25 Ohio State visiting No. 17 Duke. Traditional powers also meet when No. 18 North Carolina visits No. 10 Indiana.

After beating up on other conferences, two of the biggest will begin beating up on each other this weekend. The ACC slate begins with the Blue Devils heading to Boston College and Virginia visiting Florida State on Saturday, while the Big Ten gets going Friday night with Illinois heading to Maryland and Saturday with Indiana taking on Rutgers.

OTHER GAMES TO WATCH

Houston will put its first No. 1 ranking since 1983 on the line against Saint Mary’s on Saturday at Dickies Arena in Fort Worth, Texas. And on Sunday, Michigan takes on Kentucky at the 02 Arena in London.