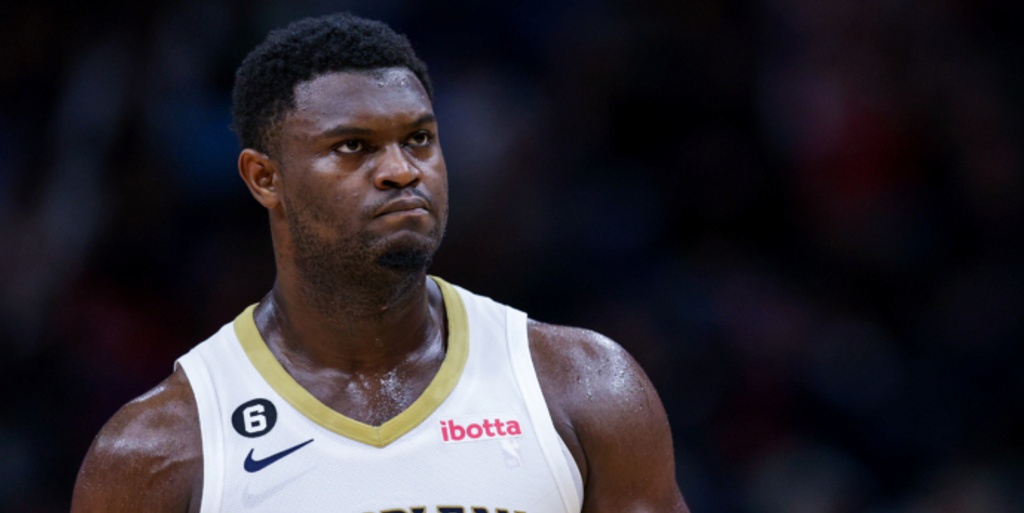 One day before Thanksgiving — immediately after the New Orleans Pelicans defeated the San Antonio Spurs — Zion Williamson was asked an innocent question: What is your favorite dish?

“You're trying to set me up,” Williamson replied. “No matter what answer I give, social media is going to clown me. So, no comment."

Williamson was smiling and many people thought the exchange was funny. However, upon reflection, it’s a bit sad. Over the years, Williamson has dealt with so many weight-related jokes and barbs that he doesn’t even feel comfortable broaching the topic of food.

“You tryna set me up….no matter what I answer I give, social media gonna clown me. So no comment.”

Zion Williamson refused to say what his favorite Thanksgiving dish is 🤣 pic.twitter.com/wiOVx0QCOG

Unfortunately, what Zion said is probably true. Had he answered this question, his mentions likely would’ve been full of rude memes and jokes about his weight.

Not only has Williamson’s weight been the butt of many jokes online, but media members have also discussed his body a ton. It can’t be easy to have so much attention focused on your weight at 22 years old, especially when your earnings are directly tied to your body.

Williamson’s contract with the Pelicans features periodic weigh-ins and “the sum of his weight and body fat percentage must be below 295,” according to Christian Clark of NOLA.com. If this number is above 295, the team can reduce his guaranteed money. Williamson has hired a private chef and personal trainer to meet his contractual requirements. And it’s worth noting that he’s not the only NBA player with a weight-related clause in his contract.

Though the Pelicans would argue that they are just trying to keep Zion healthy and protect their superstar asset, there’s no question that these weigh-ins (plus the barrage of jokes and negativity) could take a toll on a person and potentially affect their relationship with food.

While there’s no evidence that Williamson has dealt with an eating disorder (and I’m not suggesting that he has), there are many athletes who do struggle with disordered eating.

Approximately 10 million men in the United States will suffer from an eating disorder during their lifetime, and elite athletes are nearly three times more likely to have an eating disorder, according to a study by the Norwegian University of Sport and Physical Education.

For example, many boxers develop eating disorders — such as anorexia, bulimia or binge eating — since they are expected to cut weight and heavily restrict what they eat prior to fights.

“There is a misconception that eating disorders are disorders for females. The reality is that men struggle with eating disorders just like women do,” said Erin Rubenking, the associate director and clinical care coordinator for the University of Colorado Athletic Department’s Psychological Health and Performance program. “It often takes men a much longer time to get help because of that.”

Several years ago, former New York Knicks center Michael Sweetney opened up to me about the harassment he faced about his weight and how it affected his mental health.

“When I go talk to kids, I use my life as an example. I tell them, ‘Google my name. All you’re going to see is a bunch of fat jokes and bad stuff about me. You won’t find anything positive,’” Sweetney said. “A lot of these kids get cyberbullied, so I try to use myself as an example to help them get through it. I tell them what I went through, show them [negative] articles that were written about me and make it clear that everything is going to be okay — even if they don’t understand or believe that right now. And one thing I’ve realized is that a lot of the people who cyberbully others are going through something themselves, and are unhappy with themselves, so they pick on other people.

“I’ll never mention the person’s name, but about a year ago, a writer reached out to me. He wrote a really bad article about me a while back — it was just terrible, going in on me and mocking my weight – and he found out that I’d suffered from depression. He called me to apologize and said that he was suffering from depression too and he felt that picking on other people would make him feel better. I didn’t hold any of it against him; in fact, we still keep in contact and we’re good friends now. People go through things. But that’s where, again, I can point to my own story and tell kids, ‘It’s not you. It’s more likely that the other person has some issues they’re working out.’ Fortunately, I think my talks have been helping people.”

After Sweetney’s father died in 2003, his depression got so bad that he attempted suicide during his stint with the Knicks.

“I remember the night,” Sweetney told me. “We were in Cleveland one night and I just took a bunch of pain pills, hoping it would take me out. But I woke up the next morning thinking, ‘Well, it didn’t work.’ That’s how bad it was. I didn’t like basketball and I just didn’t like life at the time... Even after I tried to commit suicide, nobody really knew. I was suffering really bad. I was in New York, battling this while the media was writing [negative] articles about me, and I felt like I had nowhere to go. I just kept digging myself into a deeper hole of depression…

“[I] tell kids my story. You know, ‘Hey, I was the ninth pick in the NBA draft — the same class as LeBron James and Dwyane Wade — and people looked at me as being a potential All-Star and whatnot. I didn’t live up to that, and a big part of that was because of my depression. I kept digging my hole deeper.’ I try to tell these kids, ‘At the first sign of depression, get help. Go talk to someone. Don’t hold it in.’ For me, it got to the point where I was holding it in and I gained so much weight that I lost my NBA career.”

Pointing to a more recent example, DJ Carton — who currently plays for the Iowa Wolves of the NBA G League — has been open about his struggles with disordered eating. While playing at Ohio State, he lost a significant amount of weight while battling an eating disorder and ultimately took a leave of absence, citing mental health issues. After the season, he transferred to Marquette and was able to resume his career.

Most people don’t realize that eating disorders can be deadly. Every 52 minutes, at least one person dies from issues related to an eating disorder, according to the National Association of Anorexia Nervosa and Associated Disorders. Each year, 10,200 deaths are the direct result of eating disorders, as they can cause complications such as heart failure, kidney failure, pancreatitis, peptic ulcers, type-II diabetes, gallbladder disease and heart disease. Also, roughly 26% of people who are struggling with disordered eating will attempt suicide at some point.

Fans may think jokes or insults about an athlete’s weight are harmless, but these barbs can have serious consequences and take a toll on someone’s mental health.