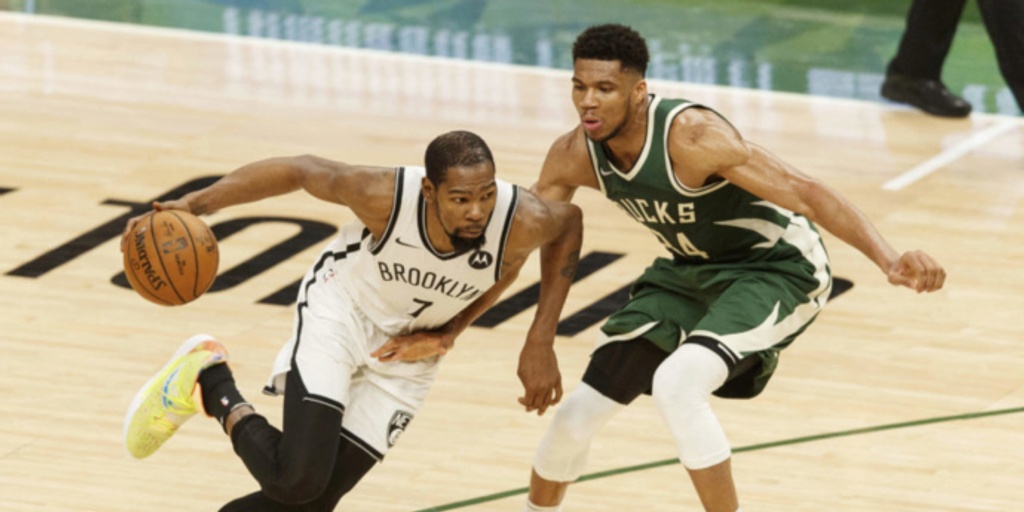 Giannis Antetokounmpo scored a season-high 49 points to propel the Milwaukee Bucks past the Brooklyn Nets, 117-114, in a battle of Eastern Conference titans on Sunday.

Antetokounmpo made 21 of 36 shots, including 4 of 8 three-pointers, while adding eight rebounds, four assists and three blocks. Khris Middleton added 26 points, 11 rebounds and six assists for the Bucks (40-24) in the win.

Kevin Durant nearly matched Antetokounmpo with 42 points of his own. The Nets star went 16-for-33 from the floor and added ten rebounds. Kyrie Irving contributed 20 points, seven rebounds and six assists.

Brooklyn (43-22) maintains its hold on first place in the East standings, while Milwaukee sits third. The Bucks overcame an early deficit by outscoring the Nets 34-22 in the second quarter. Both sides entered the fourth quarter tied at 90 points apiece. Durant had a chance to tie the game in the closing moments, but his long three-pointer fell short.

Antetokounmpo also had eight rebounds, four assists and three blocked shots. He went 21 for 36 from the field, helping Milwaukee overcome a terrific performance by Durant.

The Bucks (40-24) won for the third time in four games to pull within 2 1/2 games of the Nets (43-22) in the three-way battle for the top spot in the Eastern Conference. Philadelphia is on top at 42-21 heading into its matchup with San Antonio on Sunday night.

Durant had 42 points and 10 rebounds for the Nets, but he missed a difficult fadeaway 3-pointer at the buzzer. Kyrie Irving scored 20 points, and Landry Shamet finished with 17.

A slick move by Antetokounmpo gave the Bucks a 117-112 lead, and Irving answered with a layup. But Durant and Khris Middleton traded 3-point misses before the final attempt by Durant.

Jrue Holiday had 18 points for Milwaukee, and Bryn Forbes finished with 12.

Antetokounmpo scored the Bucks’ first 16 points of the third quarter, and his personal streak stopped when he passed to Forbes for a 3-pointer. He had 18 points in the third, and the game was tied at 90 heading to the fourth.

Durant lifted the Nets with 13 points in the quarter, including three 3-pointers.

Bucks: Antetokounmpo was cleared to play and started after spraining his right ankle in the opening minute of the Bucks’ loss at Houston on Thursday. He missed the Bucks’ 108-98 win in Chicago on Friday. “They’ve put him through quite a bit of testing and work,” coach Mike Budenholzer said. “Giannis is very familiar with his body and these type of injuries. At some point you pass the test, you feel good, you go.” … Donte DiVincenzo returned after missing the Bulls game because of right big toe soreness. ... Forward Bobby Portis, who posted double-doubles in the previous two games, was sidelined with a stomach illness.

The Bucks and Nets conclude their two-game series in Milwaukee on Tuesday.