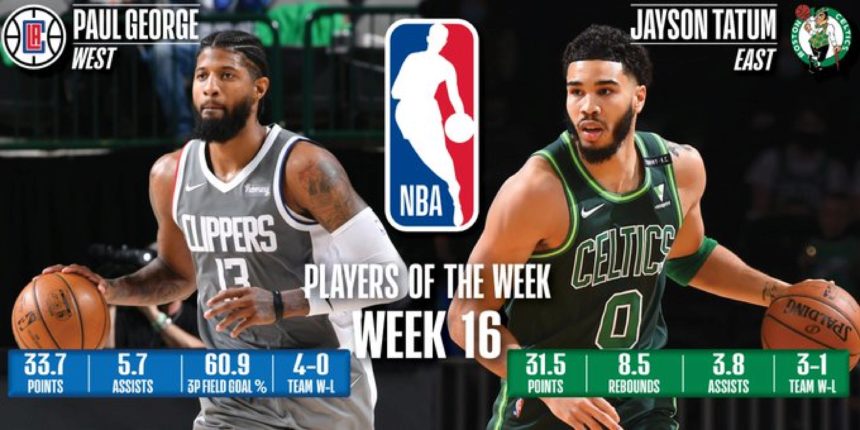 George, Tatum named NBA Players of the Week for Apr. 5-11

Paul George of the LA Clippers and Jayson Tatum of the Boston Celtics were named the NBA Players of the Week for the Western and Eastern Conference, respectively.

Out west, George has been great lately for the Clippers. Over the last week he led LA to a perfect 4-0 record while averaging 33.7 points and 5.7 assists per game. George also shot a blistering hot 60.9% from deep in the four games. As a team, the Clippers have risen up the standings in the West to third place, having won eight of their last 10 games and are four games behind first-place Utah.

In the Eastern Conference, Tatum averaged 31.5 points, 8.5 rebounds, and 3.8 assists while leading the Celtics to a 3-1 record. That includes his 53-point gem in an overtime win over the Minnesota Timberwolves on Friday night. While the Celtics have mostly underwhelmed this season, things seem to be trending in the right direction as they've won seven of their last 10 games and are just a game back of fourth-place Atlanta in the Eastern Conference.