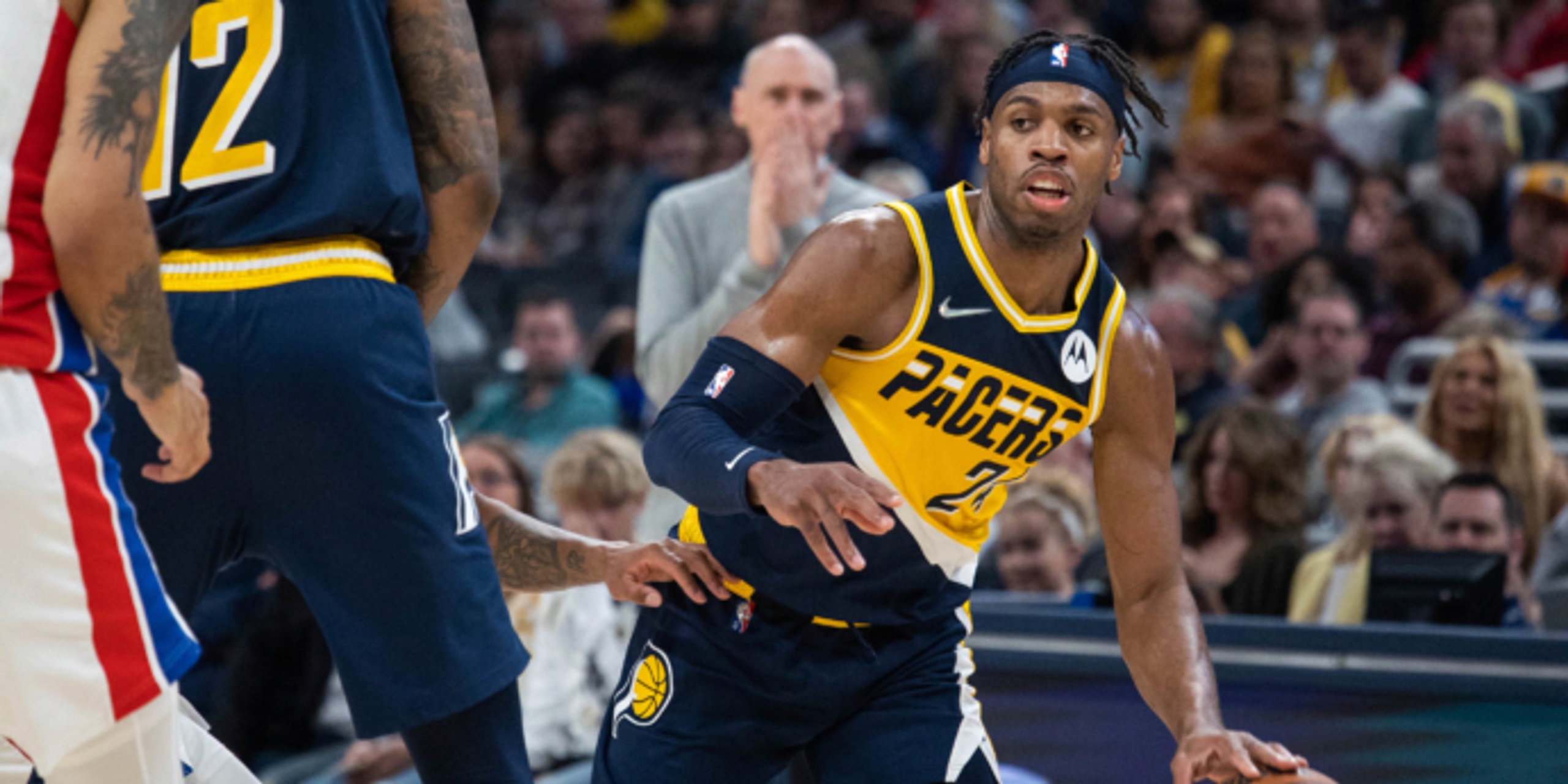 The 2022 NBA Draft is only 10 days away. How will it all play out for teams hoping to change their long-term fortunes? Not only will the draft selections bring intrigue, but so will the endless amounts of trade rumors.

Buzz is already picking back up, but who are some players that are flying a little too far under the radar from a potential trade standpoint? Let’s go ahead and dive into five names who make a lot of sense as potential movers on draft night.

Buddy Hield was a revelation within Rick Carlisle’s system in Indiana, posting a career-high 4.8 assists per game for the Pacers. Hield was already known as one of the NBA’s most dangerous sharpshooters, but added offensive equity makes him even more of an attractive trade chip for the rebuilding Pacers to consider moving.

Every contender needs additional three-point shooting, and there’s not a better potential option out there this offseason than Hield. With $39 million remaining over the final two years of his contract, it could be tough trying to find the ideal trade partner. However, some teams can get creative to fit the veteran into their salary sheet.

A potential fit for Hield that makes way too much sense is Philadelphia. Armed with the No. 23 overall pick they didn’t plan on using, alongside Danny Green’s expiring non-guaranteed $10 million contract, the Sixers could be an under-the-radar team to monitor over the next few weeks. Getting involved for someone like Hield, who adds even more gravity with Joel Embiid and James Harden, checks a lot of Daryl Morey-related boxes.

Hield doesn’t fit the Pacers’ timeline, so don’t be stunned if he’s on the move after building back up his value for a few months in Indianapolis.

Toronto has been sniffing around on the top prospects in this year’s draft, including names such as Arizona wing Bennedict Mathurin and G League Ignite playmaker Dyson Daniels. Both are projected to go within the first 10 picks, but the Raptors won’t be on the clock until No. 33 overall. Whether it be OG Anunoby or Gary Trent Jr., Toronto has its trade chip available to move up the board.

It’s been reported that it would take a hefty offer in order for the Raptors to even consider dealing Anunoby. Operating under that assumption, Trent feels like the more realistic bargaining chip on draft night. GTJ is a certified bucket-getter who is nowhere even close to his prime years. In a top-heavy class, Toronto could move into the late lottery by parlaying the former Duke Blue Devil as the price.

How about a hypothetical scenario involving the Washington Wizards? Washington is in win-now mode, especially with the future of Bradley Beal seemingly always up in the air. How would D.C. feel about Trent and Beal as a scoring combination paired with the inside duo of Kristaps Porzingis and Daniel Gafford? It’s at least a start, and the board could be rather thin for Washington by the time No. 10 rolls around. 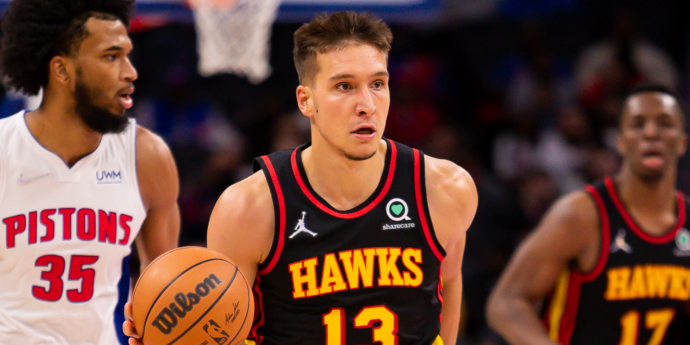 After reporting Landry Fields' promotion to general manager, ESPN’s Adrian Wojnarowski relayed on Monday that the Atlanta Hawks are expected to be one of the most active teams in trade talks between now and free agency. Rumors of potential draft-night deals involving John Collins are out there, but there’s also some smoke billowing around the future of Bogdan Bogdanovic in Atlanta. Having already paid Kevin Huerter, and with De’Andre Hunter soon due a lucrative extension, could now be the right time to let go of Bogdanovic?

If the Hawks indeed plan on being aggressive, Bogdanovic and the No. 16 overall pick could get them a strong return package. The Athletic’s James Edwards III shared that he’s heard the Hawks have shown recent interest in Jerami Grant, which includes Bogdanovic and their first-round pick going to Detroit. Honestly, that’s a fair, win-win trade for both the Hawks and Pistons.

Expect a lot of changes for the Hawks’ roster as they retool around Trae Young. Collins feels like he could soon be out the door, but watch out for Bogdanovic as well.

Everyone around the NBA is waiting to see what domino falls next in Salt Lake City as the Jazz enter a tumultuous offseason. Uncertain futures of Donovan Mitchell and Rudy Gobert cloud what has been an impressive run over the last few years. Now, it seems to be reaching a decision point one way or another between Mitchell and Gobert. Going off multiple reports, if Mitchell gets his way, New York Knicks associate head coach Johnnie Bryant will be the new lead voice in Utah while Gobert is shipped off elsewhere.

Outside of the star angles in Utah, the team's roster has a lot of talent that could net value for executive Danny Ainge. Bojan Bogdanovic immediately stands out as one of those premier assets to flip on a $19.2 million expiring contract. Entering his age-33 season, Bogdanovic could be the main piece utilized by the Jazz to bring in more all-around versatility and/or youth.

In this scenario, Utah and Atlanta strike a deal involving Bogdanovic for Danilo Gallinari’s barely-guaranteed $21 million salary and Atlanta's first-round pick at No. 16 overall. The Jazz net a top-20 pick while Atlanta gets a win-now piece to surround its superstar point guard.

Oklahoma City is already making moves before draft night arrives a little over a week from now. The Thunder acquired veteran forward JaMychal Green from the Denver Nuggets in a salary dump. OKC sent the Nuggets the No. 30 overall pick in exchange for a 2027 protected first-rounder and Green. With so many future draft picks at their disposal as they embark on this historic rebuild attempt, the Thunder need to consolidate some of them due to current roster construction. With so much young talent already on the roster, it was going to be impossible to fit in more than a few extra rookies.

Rumors have been picking up steam around Shaedon Sharpe, which easily could be a smokescreen because of OKC’s history. Sharpe’s fit with the Thunder actually makes a lot of sense, though, plus ESPN’s Jonathan Givony said the interest is mutual. Operating under the assumption that Chet Holmgren is selected by them at No. 2, imagine if the Thunder could also snag Sharpe as well in a trade-up? Instantly, OKC would be a major draft-night winner.

Sharpe’s arrival would probably mean Lu Dort could be sent out in the same deal, especially to make Portland move back five spots in this scenario. Dort is entering the final year of his deal and is extension-eligible. Although losing Dort would be a major blow, getting Holmgren and Sharpe to go with Shai Gilgeous-Alexander and Josh Giddey would bring immense hope to Oklahoma City.

Trade speculation is only beginning with the offseason cycle now picking up full steam. Stay tuned to BasketballNews.com as we’ll have you covered all offseason.