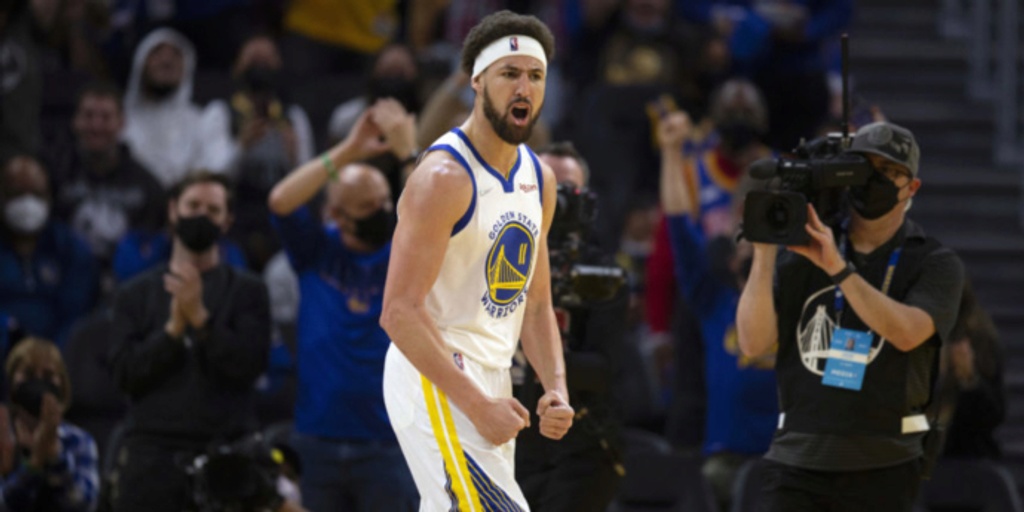 It’s been 941 days since Klay Thompson has played an NBA game, as he's been rehabbing a torn ACL and a torn Achilles’ tendon. But Sunday night was “Klay Day,” as he made his much anticipated return to the floor at the Chase Center for the Golden State Warriors against the Cleveland Cavaliers.

The crowd erupted as Klay was being announced as a starter for the first time in over two-and-a-half years; you could see the focus on his face, and his teammates visibly wanted to see him get going.

Less than a minute into the game, Thompson came off a screen for a floater on his first attempt. And a few moments later, he hit his first three-pointer to surpass 12,000 career points.

Later, he drove the lane, got in between two different Cavs big men and dunked, which caused the fans and the Warriors' bench to explode.

And for the rest of the game, every time he touched the ball, Dub Nation was ready to erupt. This was definitely a long time coming.

With the basketball world collectively applauding Thompson's return, I reached out to his former coach Mark Jackson to get his reaction on Klay's big night and 17-point performance. 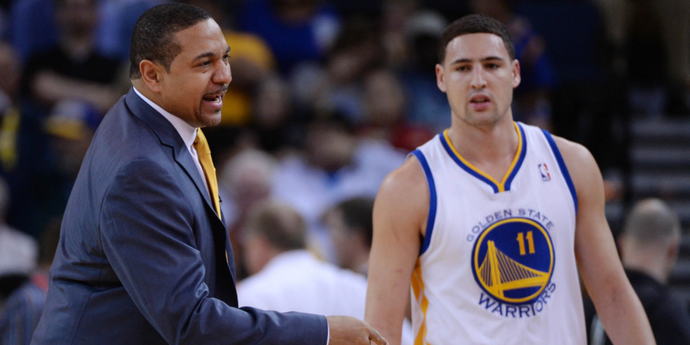 Etan Thomas: How do you feel seeing Klay Thompson battle his way back to the court after two-and-a-half years?

Mark Jackson: "Yeah, I can speak as far as a guy that once had the privilege of coaching him. I also had the privilege of calling games where he's won championships and have great moments, and also as a fan of basketball. I think it's tremendous to have him back. It truly is an awesome opportunity to see him back. The game missed him, he missed the game a tremendous amount. But I think at the same time, we missed him, and I say that because they don't make them like Klay Thompson. He's a guy that's passionate, [has an] incredible competitive spirit, [is] incredibly driven to be great and never satisfied. I think we need more players and more people like him. It's going to be exciting to have him back."

Etan: I think that his battle back from his injuries is really inspirational for younger athletes as well, because they're going to go through series or times when they have injuries. But having the strength, and the courage, and the wherewithal to battle back...

Jackson: "He has documented it at different stages during the course of his rehab, and I think he documented it to the benefit of those that are going through similar injuries. And not just on the court, but battles in life in general. He's a guy that has fought, scratched and clawed, and did everything he possibly can to see [Sunday night], the opportunity to be back on the court. And I'm proud of him, and I think he's a tremendous example of how to stick with it."

Etan: When you coached him, you saw that he was going to be great. And you called it, you said him [and Steph Curry] were going to be one of the greatest duos of all time at a young age. What is it that you saw in him and Steph that made you make that statement even at a young age for them?

Jackson: "Both guys, you don't have to beg them to get on the court. You don't have to beg them to come into the gym. They had incredible talent, incredible gifts, and it was matched with an incredible desire to be great. I don't care where you were — whether it's in an arena in front of 20,000, or an empty gym with 10 dudes — if you roll the ball out on the floor, Steph Curry and Klay Thompson are going to be ready to play, and they're going to get shots up, and if it's just two of them, they're going to play 1-on-1, and get shots up... and if other guys are willing, they're going to play 5-on-5. But you don't to have to beg them to get into the gym. They had it from day one, and the credit goes to the Curry family and the Thompson family. Great genes, for tremendous... not just all-time great champions, but all-time great guys when it comes to pros in this game."

Etan: Talk about how coachable Klay was, because I've heard that a lot about him. And Steph Curry, honestly, that as incredibly talented as they are, they were always coachable. I think that's another thing that's a good example for young talented players coming up in middle school and high school to be able to see.

Jackson: "Those guys did a tremendous job doing their job, and leading, setting examples, and never had a moment where they answered back or rolled their eyes on me. We both played in this game. Never missed an assignment, or 'Was it your fault,' or 'It was my fault, my bad.' I'll be the first to acknowledge that, just tremendous, tremendous pros. I've been around, I had the privilege to play for 17 years. I was a fan for so many years, and I've covered the game for so many years. Those guys are absolutely pros, and they allow you to do your job, and they do a tremendous job of allowing the culture to be developed by not being full of themselves."

Etan: There's another thing I was really impressed by with Klay Thompson. When you're going through injuries, especially going through as long of a time that he has been out with injuries, you have a lot of naysayers, a lot of people who say, "Okay, he might be done. He might not ever play again." All the different negative things that you hear. But apparently, he's ignored all of that and really persevered through. What message does that say about his character as well?

Jackson: "I will say, don't let him trick you. What I mean by that is... We've seen the Jordan documentary, where he uses everything as fuel, no matter if it's a reporter, or a teammate or the opposition. But when you're talking about Steph Curry and Klay Thompson, it's the same thing. They don't tell you, but they use that as fuel. With Klay being upset that he wasn't one of the top-75 players of all-time — rightfully so — he uses that as fuel. They see and hear everything, and it's an incredible testament to the toughness, the competitive drive and the willingness to want to be great."

Etan: Klay Thompson is somebody who is really beloved by a lot of fans, a lot of people. Talk about the joy and how good it is for the NBA, for him to be back, how much of a good story it is.

Jackson: "It's a phenomenal story. I think because we watched him grow from day one, we watched him become a champion, and we want a story. Part of a great story, a great movie, a great book, is facing adversity, and Klay Thompson has faced adversity. Two major, major injuries. The fans of basketball are rooting for him. We watched him fight, scratch and claw, put himself in position, and today, it's almost like a sigh of relief, but it's not just that. It's a celebration, having him back. He needs the game, but just as important, the game needs Klay Thompson, because of the pro and the person he is. Not just his talent, but what he's all about. I salute him, and I'm going to be watching and cheering him on this entire season."