It's only fitting that the Chicago Sky and Conneticut Sun would pose problems for each other. They're mirrors in a way. The most obvious similarity comes on the non-glamour end: they absolutely stifle opponents with their activity.

They pressure the ball, sometimes full-court. Ball handlers often have their work cut out for them to even get into sets. But once that process begins, the pressure dials up more. The frontcourt gets into the action.

For the Sun, Alyssa Thomas (how is she doing this with half a shoulder?) and Jonquel Jones are comfortable playing at the level of a screen, hedging or all-out blitzing a ball-handler. The Sky have the same comfort level with their frontcourt. Candace Parker might be the best hedge-big in the league, period.

To beat that pressure and that coverage, you need ball-handlers that can make decisions. More importantly, you need bigs that can keep the chains moving. Short-roll into a pocket of space and score in the middle, drive and finish at the basket, or drive and kick to an open player. By nature of sending two to the ball, someone's going to be open.

With that context, let's talk about Emma Meesseman.

She may not be Parker defensively — maybe three or four players are — but her blend of size, length and mobility more than meets the threshold needed to make Chicago's scheme work. She ranks third in the W in steals (2.1), and she had a pair of takeaways in Chicago's 83-79 win over the Sun on Friday. One of those came with the Sky dialing it up, blowing up an empty side pick-and-roll.

Offensively is where the real fun kicks in.

Meesseman can do a little bit of everything. She's converted roughly 37% of her threes since she started taking them somewhat regularly in 2016. Finishing at the basket isn't an issue, nor does her confidence wane in the intermediate area. She's one of the most skilled passers at her position. Smaller defenders can be bullied if they catch her on the block; like-sized defenders can struggle with her quickness and blend of footwork.

Put that all together and you have, in theory, a player with an answer for just about any scheme. Put that player on the Sky, and defenses have a problem on their hands. Pair said-player with Parker, and I'm not sure what you're supposed to do. Take this play for example:

Using a cross screen to get your star a post touch isn't anything out of the ordinary. Staggering it with two screens is a nice wrinkle. Using Meesseman first, then Allie Quigley (one of the best shooters on the planet) as the second screener is some nasty stuff.

The purpose of using Quigley as the second screener is to put the Sun in a bind; if the screen hits, you're either forcing a small (Courtney Williams in this case) onto Parker, or leaving Quigley over to get Williams out of the matchup. But because the Sun are a ridiculous defensive unit, Thomas is able to fight over the screen and stay attached. No mismatch is created — yet.

The attention now turns to Quigley and Courtney Vandersloot above the break. Quigley screens for Vandersloot, and it becomes an option from there. She can flare off the screen for a triple, or dive down the lane if there's an opening. 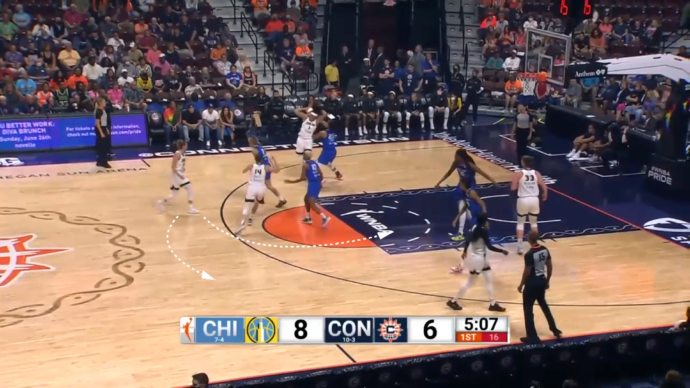 Vandersloot chooses the latter, but a pass isn't thrown. That takes us to option three of the set: an empty side ball screen. The Sun, much like the Sky, are pretty aggressive against that action. Thomas jumps out to cut off a driving lane, and Williams recovers to bring pressure on the other side. The trap is here. 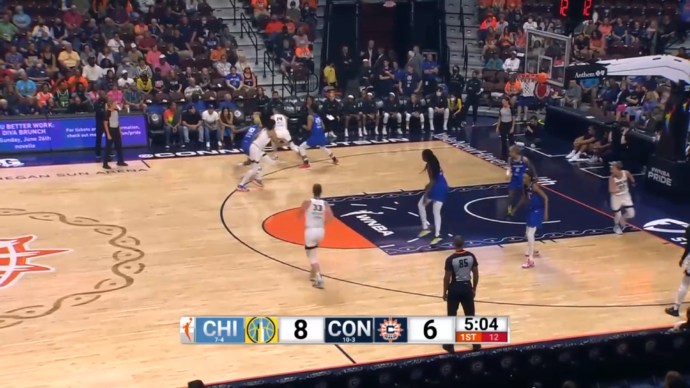 But as the trap is happening, Meesseman is lifting up the floor to fill the space that Vandersloot left. Jones has the Meesseman assignment, but she also has to account for Parker's roll. 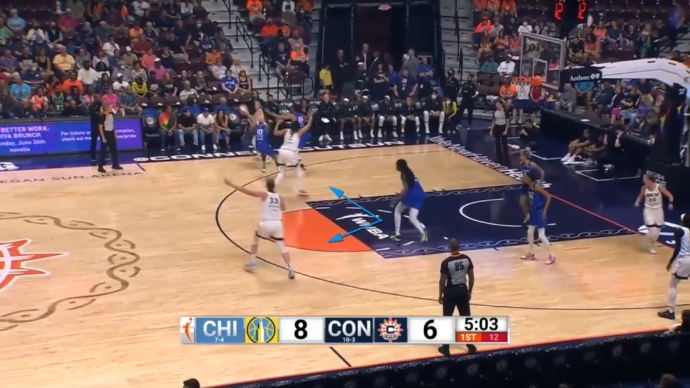 Jones has a choice to make: trust the trap to hold and stick to Meesseman, or pick up Parker so there isn't an open roll to the basket. The hidden layer to that decision: Natisha Hiedeman (No. 2, in the restricted area) would have to make the rotation to Parker if Jones follows her assignment and Quigley is able to hit Parker on the roll. As such, Jones picks up Parker. 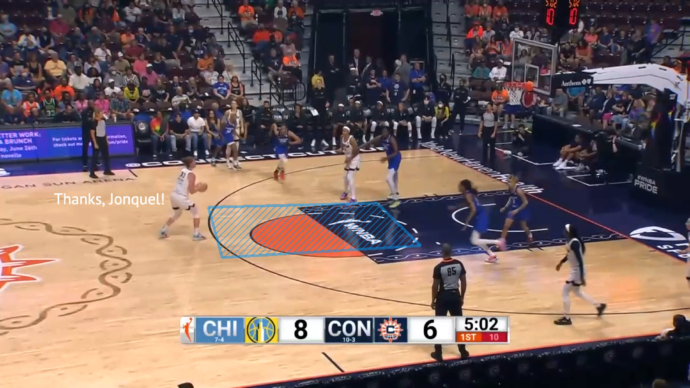 That's a whole lot of space! Meesseman knocks down the triple, accounting for three of the 13 points she'd score in the first quarter. She'd finish with a game-high 26 points on 11-of-14 shooting from the floor.