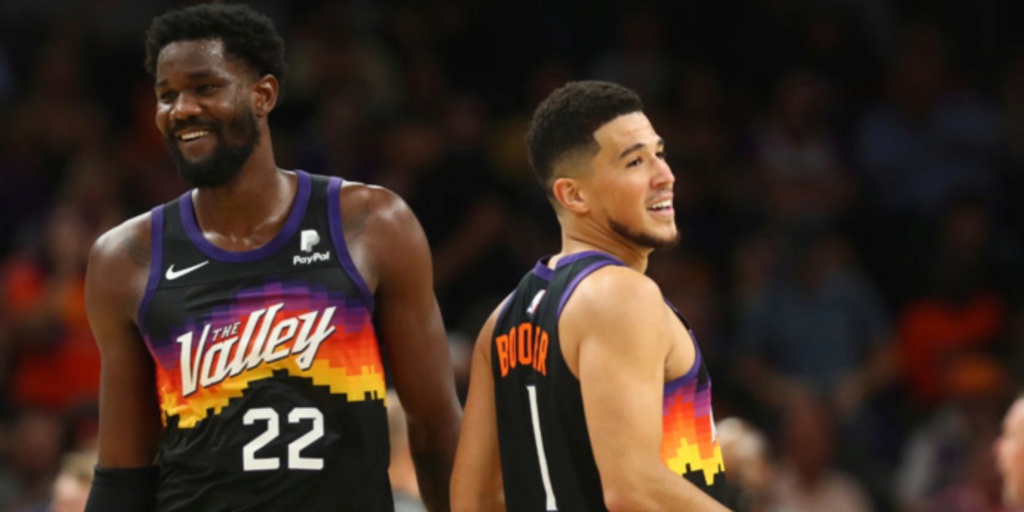 Explain one play: How the Suns create without Chris Paul

The Phoenix Suns are the best team in basketball, and have been all season long.

You get the picture.

If there was a perceived chink in the armor, it was their ability to create efficient offense beyond their star backcourt of Chris Paul and Devin Booker. Remove Paul from the mix, as he has been since the All-Star break due to a broken thumb, and it was fair to ask what things would look.

The offense humming to this degree is wildly impressive, and highlights (or further affirms, for those who follow the team closely) three things:

1) Booker is an absolute problem and deserves your All-NBA love.

2) There was room for Deandre Ayton and Mikal Bridges (among others) to stretch their games, and Paul's absence exacerbated that process. (This doesn't mean Paul was holding them back.)

3) It is hard to overstate just how effective and layered their offense is from a scheme perspective.

They fluctuate between spamming the same action, or running three or four variations of a play from the same setup. Think about your annoying friend in Madden that lines up in Gun-Bunch 98% of the time, but has four different audibles (and hot routes on top of that) to keep you on your toes.

In short, the Suns seem to have an answer for everything.

Running drop coverage is a no-go. Switching allows Booker or Ayton to cook against mismatches, and Bridges is really freakin' good at slipping screens. Put two to the ball, like the Chicago Bulls often did on Friday night whenever Nikola Vucevic was involved in action, and the Suns can pick you apart.

Take this possession as a premium example.

Using Cam Payne, a near-40% three-point shooter during his Suns tenure, as the inbounder was intentional. Coaches always tell you to watch the inbounder, and his presence is the hidden key to making this baseline out-of-bounds play (BLOB) work.

Things kick-off with Booker curling around an Ayton screen to receive the inbound. As noted earlier, the Bulls played Vucevic at the level (or higher) in ball screens against Booker in order to 1) keep him from turning the corner and 2) force someone else make decisions.

After receiving the pass, Booker runs a ball screen with Ayton. Sure enough, Vucevic jumps out to pressure Booker. And that, my friends, is where things get hazy for the Bulls.

With Vucevic playing high, the backline is responsible for tagging the roller (Ayton) and then helping the tagger by zoning up behind him. Because of the location of the play and the personnel involved (the Bulls are #TooSmallErneh), this is darn-near impossible. 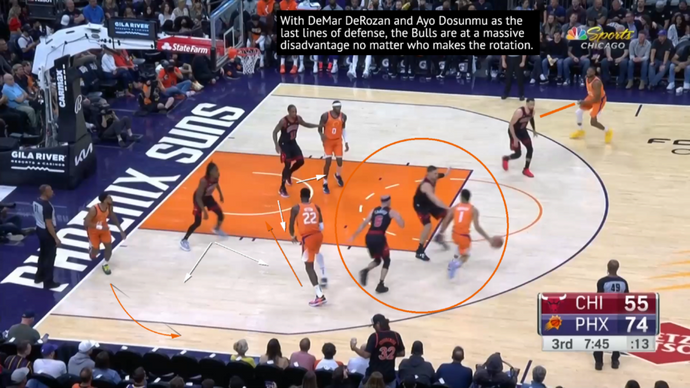 DeRozan is in a bad place. If he picks up Ayton, allowing Dosunmu to stick with Payne as he relocates to the corner, that would leave Zach LaVine to split the difference between Bridges and Torrey Craig. With Bridges chilling above the break (empty corner!) and Bridges in the paint, there's no win.

Dosunmu is also in a bad place. If DeRozan can't handle Ayton, the smaller Dosunmu surely can't. And that comes with the added stress of leaving Payne open in the corner.

Booker further complicates things by accepting the pressure from Vucevic and stringing out the ball screen. 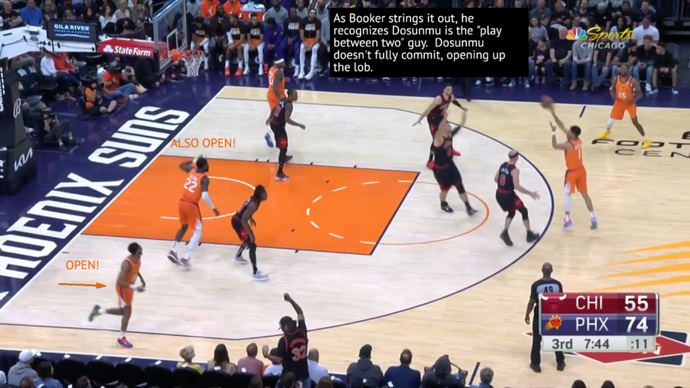 From there, Booker has his pick of the litter — firing the dart to Payne in the corner, or lofting a pass to Ayton underneath. He chooses the latter, leading to one of the easiest baskets the Suns scored on Friday night.

It's important for the Suns, and Booker in particular, to get these reps against aggressive coverages. As dynamic as the Suns' pick-and-roll attack is, they rank 15th in points per possession (PPP) on trips featuring a blitz or hedge by the defense.

Booker has especially struggled against traps and hedges in ball screens, generating 0.81 PPP on direct plays. Among 41 players that have been hedged/blitzed on 100 picks, that ranks 38th. Only Dejounte Murray (0.8), Cade Cunningham (0.78) and Jordan Poole (0.76) are lower on the board.