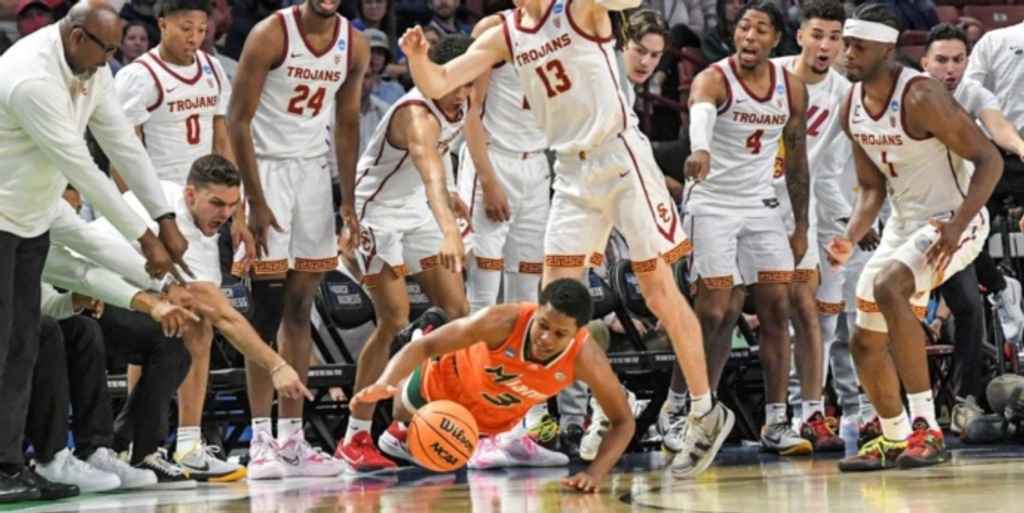 The second day of the 2022 NCAA tournament featured some slugfests, some blowouts, as well as a First Four team surviving another day. The Round of 32 is now completely locked-in, and we’ll also take a peek at the must-watch matchups for Saturday.

Alabama in recent seasons has had a strong program, with a number of players in the conversation for the NBA draft. This year the Crimson Tide’s season has been a bit of a roller coaster, including a major win over arguably the best team in college basketball, Gonzaga, but also key SEC and non-conference losses that show in their 19-13 record coming into this game. Notre Dame had their fair share of ups and downs as well, but came into this first round matchup with momentum off their First Four double-OT win against Rutgers. The upset potential was apparent, and the Fighting Irish delivered behind a huge game from Cormac Ryan. The junior guard finished with a season-high 29 points, well above his 9.2 PPG average. Ryan has been coming on strong for the Irish with 20 and 16 points in their last two games respectively. Thanks to the efforts of Ryan and impressive freshman wing Blake Wesley — he scored 18 — Notre Dame moved on to play third-seeded Texas Tech in the second round.

These were two teams with similar records that had similar patterns to their seasons — they both started the year with 12 game winning streaks that went through Christmas. However, playing in two of the best conferences in the country in the SEC and Big 12, both teams took their lumps through the remainder of the season. Although Iowa State took an 11-point lead around the 7-minute mark in the second half, LSU made an 11-1 run that brought the game within one point with under two minutes remaining. Iowa State pulled out the low scoring win with Tyrese Hunter being the team's major difference maker, dropping 23 points on 7-for-11 shooting from beyond the arc. The freshman guard’s clutch shooting clinic included two late threes that helped Iowa State pull away from the Tigers at the end. Hunter’s 5 steals also led a stingy Cyclones defense that recorded 15 total. Iowa State’s victory means they advance to the second round to take on third-seeded Wisconsin on Sunday.

BEST GAMES OF THE DAY

This matchup was tightly contested throughout the first 15 minutes, until Miami began to break the game open and took a 13-point lead with three minutes remaining in the first half. USC’s offense grew stagnant, and the Hurricanes took advantage with a 31-20 lead at halftime. However, the Trojans came fighting back to begin the second half with two threes and a fast break layup from Isaiah Mobley (he finished with 11 points) to bring them within one. From this point it was a back and forth battle that favored Miami, yet USC would manage a big basket to keep it close — USC was down by seven points with 45 seconds left in the game. A Doug Peterson three, a Miami out-of-bounds call, and then another Peterson three brought the Trojans back within one, with 25.3 seconds left in the game.

After free throws from both teams, it was tied at 66 in the final moments. Charlie Moore drove to the lane and attempted a contested layup, which earned him a foul call. Moore stepped to the line and knocked down two free throws to seal the game. A halfcourt heave at the buzzer almost fell for Doug Peterson — he ended the game with a valiant effort of 17 points, 5 rebounds and 3 assists. Miami’s Isaiah Wong led the Hurricanes with 22 points while dealing with foul trouble and Moore followed with 16 points. Miami will see second-seeded Auburn in the second round.

Illinois only led this game for 25 seconds, but it was the most important time to do so. Chattanooga jumped on Illinois early, with a 14-3 lead in the first five minutes. The Mocs had control over most of the first half, but a Fighting Illini run at the end of period brought the score to 33-29.

The second half started much like the first with Chattanooga playing good basketball and giving themselves an 11-point cushion, but a very resilient Illinois team fought back again and kept the game within one or two possessions over the course of the closing minutes. After some questionable possessions by Chattanooga, Illinois took its first lead of the game on a Kofi Cockburn putback with 47 seconds remaining. The Mocs received a trip to the line on the next possession and two free throws were knocked down by SOCON Player of the Year Malachi Smith (who finished with 12 points and 8 rebounds), which gave his team the lead.

On the following possession Alfonso Plummer was fouled and hit two free throws for the Illini to take the lead back. On the final possession, the Mocs gave the ball to Smith who had two looks to take home the win — he was blocked on a left hand drive, then shot a last second midrange jumper that went just a tad long. Cockburn finished with 17 points and 13 rebounds and Plummer provided 15 points of his own. Illinois avoided the upset and will face fifth-seeded Houston on Sunday.

An up-and-down season for Michigan State had some experts predicting Davidson would come away with this game. However, an impressive 27 points on 9-12 from the floor by Joey Hauser was the big difference.

An interesting storyline revolved around Davidson’s transfer starting point guard, Foster Loyer — he's a Michigan native who made the move down to play with the Wildcats after three seasons of limited production for the Spartans. This proved to be a good move for Loyer, as he’s been the leading scorer and assist man for Davidson with 16.1 points and 3.3 assists per game this season. The motivation was there for Davidson, and the team played with a confidence that showed each time the team came up with an answer to Michigan State’s attempts to pull away.

Davidson took a five-point lead with under seven minutes to go, but with some big buckets by Hauser, heady play by AJ Hoggard (14 points) and a three from Gabe Brown (12 points), the Spartans made a 10-0 run to take a five-point lead of their own with under four minutes left. Michigan State had an eight point lead with one minute remaining, but a late push by the Wildcats with some great clock management, clutch baskets and pressure defense that led to a bad MSU turnover brought the game back in reach. However, in the end, Michigan State was able to close it out with two Tyson Walker free throws. Michigan State will take on second-seeded Duke in the round of 32.

Colgate is one of the best three-point shooting teams in the country, and came into this game on a 15-game winning streak. The Patriot League champs made sure Wisconsin knew this one wouldn’t be easy. However, this would be the Raiders’s biggest test, as the Badgers won the Big Ten regular season championship and have a projected lottery pick in Johnny Davis.

Colgate found success scoring the ball from inside before unleashing their long-range prowess. Senior Nelly Cummings for Colgate finished the game with 20 points, 6 rebounds and 6 assists — he gave the Badgers trouble on all three levels. Cummings even locked the game at 28-all with a baseline reverse layup at the buzzer to go into halftime.

But the stars shine bright on the big stage and, after a slow start, Johnny Davis got going in the second half. Davis finished with 25 points on 8 for 20 shooting from the floor and added 6 rebounds and 2 steals. Tyler Wahl followed Davis with 15 points, 9 rebounds, 4 assists and 2 steals of his own. The Raiders played a strong game but wore down as the battle-tested Badgers showed up down the stretch. Wisconsin has a date with 11th-seeded Iowa State in the next round.

Baylor is missing two key pieces due to injury, —LJ Cryer and Jonathan Tchamwa Tchatchoua — while UNC is playing some of its best basketball of the season. Caleb Love is worth keeping an eye on.

The Bruins are hoping to get back to the Final Four while Saint Mary’s wants to prove the WCC isn’t just run by Gonzaga. This could be a battle.

Does Saint Peter’s have more magic for a Sweet 16 birth? Or will Murray State's toughness win out?