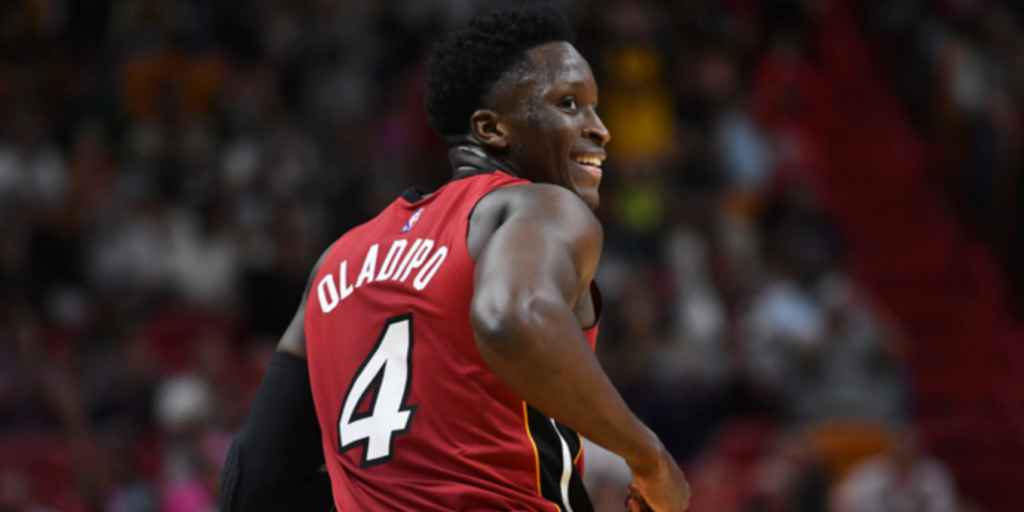 The Miami Heat have never been whole.

Jimmy Butler has missed chunks of time. Bam Adebayo has done the same. Kyle Lowry, the shiny new sign-and-trade toy from the summer, has been unavailable for large swaths of the season. Tyler Herro, the current frontrunner for Sixth Man of the Year, has missed his fair share too.

If you haven't seen the stat already, I'll drop it here: the foursome of Butler/Adebayo/Lowry/Herro has only played 76 minutes together — roughtly a game-and-a-half — all season long.

There's been a constant feeling of "reinforcements on the way" while the Heat scrapped, slashed or clawed their way to the Eastern Conference's best record. To keep up with the theme, they welcomed another piece to the puzzle.

Victor Oladipo, a former All-Star (and a soulful singer to boot) has been on the mend all season, recovering from surgery on his quad tendon. We haven't seen him since last May, where he gave the Heat four games of solid defense, inconsistent burst and shaky shooting. Let's just say his injury-ravaged, three-team campaign during the 2020-21 season was a whirlwind for everyone involved.

Oladipo made his return on Monday night against the Houston Rockets, coincidentally his most recent team. He came off the bench, usurping Gabe Vincent* and Max Strus in the rotational pecking order (at least for one game.

(It's worth noting that Lowry made his return from a three-game absence as well, which likely made a bigger impact on Vincent's minutes than Oladipo did. Strus, though...)

Let's dig into what he looked like on the floor.

We'll start with the non-glamour end, mostly because that's where Oladipo looked most comfortable in my eyes.

He came out of the gate with an impact play. He checked in with 1:55 left in the first quarter, and drew a charge not even 20 seconds into his stint.

On a per-possession basis, graded out as "pretty good" to me. Miami mostly switched with him on the floor — the Heat are the second-switchiest team in the NBA, per Second Spectrum — so we didn't get many reps of him navigating screens. But with that switching, he was put in position to defend in space pretty often.

Oladipo moved well laterally, only occasionally giving up inside leverage on drives. If there's a positive to draw, it's that his strength showed up in a pretty big way. He matched up with strength-based drivers, and either held firm and finished with contests, or, cut off those drives altogether.

If I could also add: I really enjoyed watching Oladipo find himself off the ball.

He found himself in the weak-side corner often based on matchups, and you could see him peeling over early to show help. He was roaming a little bit, particularly in the second half.

This was my favorite possession from him. Just look at how he times his help and contests vertically. The shot was made, but this is the kind of weak-side rotation he was making at his peak with the Indiana Pacers.

Oladipo's usage is going to be interesting to track moving forward.

Paired with Herro (and Lowry) in terms of handlers, Oladipo was used in an off-ball role. He spaced in the weak-side corner, or kicked off (Pistol) actions with screens and handoffs.

The spatial awareness was on display early, lifting from the wing in conjunction with the ball-handler in order to put strain on his defender.

We were able to get some transition flashes from him in the first half. On two attempts — a turnover and a missed/blocked shot — Oladipo attempted to go with battering-ram efforts to get to his spots.

The second half is where Oladipo got more on-ball usage. His burst wasn't at 2018 levels — nor should that be the expectation — but he certainly didn't look overwhelmed. There was a decisiveness with his touches that led to shots for himself, assist opportunities or quick(er than you'd like) outlets to teammates if he didn't create an advantage. In other words: We didn't see much pounding it into the dirt.

Once he found himself at the tip of the spear, he was able to leverage his driving ability to feed others. A drive-and-shovel to Dewayne Dedmon led to a thunderous flush, while an early hit-ahead to Bam Adebayo on an empty corner pick-and-roll (with Adebayo slipping against a Houston switch) led to a drawn foul. Just peep the placement though.

And then, there were the shot-creation flashes. You can tell his comfort grew in the second half, because his attacks became more audacious. It started with a straight-line drive (after a failed Spain pick-and-roll), and ended with Oladipo dipping into his snatchback bag. This is the kind of bonus creation the Heat want to add to their arsenal.

There will be questions to answer moving forward. What does Oladipo look like against stiffer defensive attention? Can he defend tougher matchups? How long is the leash, considering Vincent has been pretty darn good this season?

We'll see what happens. For now, it's hard not to be impressed with what Oladipo was able to showcase off of this kind of absence.