The Bradley Beal Sweepstakes may finally be heating up.

There's been smoke around Beal's name for well over a year now. As teams hunt for the next disgruntled star to trade for, Beal has popped out as an ideal target.

First and foremost, he's really freakin' good at basketball. Beal is averaging a 29-5-5 stat line over the past three seasons on a robust 58.4% True Shooting percentage (TS%). Known as an elite shooting prospect coming out of Florida many years ago, Beal has transformed himself into one of the most complete offensive players in the sport.

His 35.1% clip on threes over the past three seasons undersells his shooting ability. His volume (7.3 attempts per game) and degree of difficulty -- he takes a ton of threes off the bounce -- factor into that lower-than-you-think number. At this point, the three-point shooting complements the rest of this game, not the other way around.

There aren't many better slashers than Beal. While not a LaVine-like leaper, Beal uses his lower body strength, varying stride length and keen understanding of body angles to generate good looks -- and does so often. He's converted at least 60% of his shots inside of three feet in all but one season of his career, and is now a regular at the free-throw line.

Beyond that, Beal may finally be ready to look for greener pastures. He's been steadfast in his desire to build something in Washington, provided that they build a winner around him. And to the team's credit, genuine efforts have been made. Most notably, the Wizards traded former franchise cornerstone John Wall in a deal for Russell Westbrook to add much-needed star power to the roster.

Ultimately, it hasn't worked thus far. Combine that with Beal's contract status, and it's easy to see why things are starting to come to a head. According to Bleacher Report's Jake Fischer, Beal may make a decision on his future as early as this week.

If a trade request does come, here are a few teams that should throw their hats in the ring for the All-Star guard.

The connection between Beal and Jayson Tatum is an obvious one. Depending on what some of the teams on the fringes decide to do, a strong argument could be made for Jaylen Brown being the best player that could be offered to Washington.

The Wizards would likely ask for more -- picks, prospects like Robert Williams and/or Payton Pritchard, and maybe Marcus Smart, as well. The Celtics wouldn't have to bend on literally all of it, but this is more so to show that they have the assets necessary to swing. 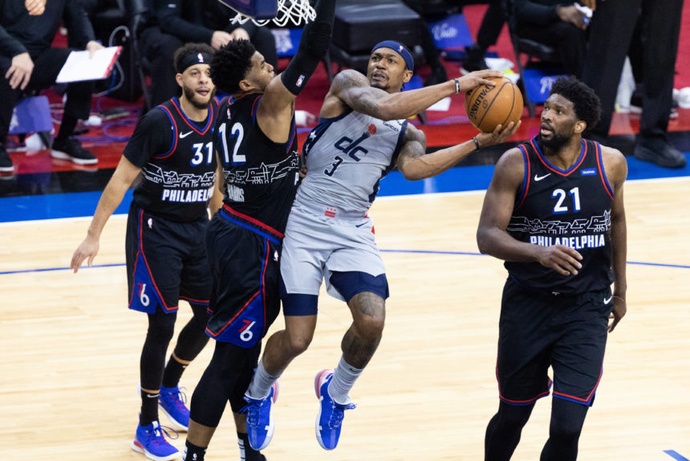 The bag of opinions on Ben Simmons is mixed right now, but he's still a young All-Star that's locked in long-term. The Sixers have more to offer on the asset front -- specifically Tyrese Maxey and Matisse Thybulle -- if it comes down to it.

The Raptors may not be openly shopping any of their core guys or the No. 4 pick, but they also don’t seem overly attached to anyone outside of OG Anunoby. The Raptors can get in the dance if they want; how many teams are beating two of Pascal Siakam, Fred VanVleet or Anunoby, plus (future) pick capital? Not many, from my view.

Of course, the question of Beal re-signing would make the Raptors antsy. You also don't want to remove too much of the defensive infrastructure if you're bringing Beal in. This remains one of my favorite landing spots for Beal if the Raptors are serious about him, though.

The Warriors fit seems a bit wonky to me -- Steph Curry, Beal and post-post-injury Klay Thompson doesn't scream "elite defense," for whatever that's worth to you -- but it's hard to fault the Warriors for being interested. That is a ton of offensive firepower, and Steph deserves to have someone to spell him of some of his on-ball creation burden.

Andrew Wiggins gives you the salary. James Wiseman is (Golden State's version of) the blue-chipper. Two lottery picks (No. 7, No. 14) this season, plus virtually all of their first-rounders moving forward, give the Warriors enough ammo to put together an intriguing package.

The Hawks are fresh off a surprise Eastern Conference Finals appearance. They have their clear alpha in Trae Young, and are primed for a consolidation deal as payday nears for some of their younger guys.

They're not going to be able to -- well, they're just not going to -- pay all of John Collins, De'Andre Hunter, Cam Reddish, Onyeka Okongwu and Kevin Huerter over the next three offseasons. A combination of two, maybe three of those guys plus picks could get a conversation started.

They're in the Atlanta class for me, but I'd love to see the Grizzlies take a shot at Beal. They have a good enough mix of young pieces, veterans and pick capital to get on the phone at least. The real make-or-break component of this is if they'd be willing to part with Jaren Jackson Jr. -- because the Wizards would rightfully ask for him. From Memphis' side, the point of a Beal trade would be to form a Big Three with him, Jackson Jr., and Ja Morant. Beyond that, they'd have to be certain that Beal would want to re-sign. Improbable, but not impossible is how I'd view it.

Even after their deal with the Grizzlies, the Pelicans still have picks to dangle from the Anthony Davis and Jrue Holiday trades, plus young prospects (Nickeil Alexander-Walker, Jaxson Hayes, Kira Lewis Jr.) to toss in. They, uh, also have Brandon Ingram to headline a deal if it comes down to it, though the Pelicans would obviously prefer not to do so.

The Heat have been linked to Beal for the entirety of this process. I would imagine that two things are true: Wizards brass doesn't view Tyler Herro as lowly as NBA Twitter does at this point, but it's also unlikely that they view him as a blue-chipper. Without a bunch of firsts and swaps to throw in (thanks, OKC), the Heat would need Beal to push for them specifically. That's not impossible, but it's hard to justify them as a top-tier destination with that many hoops to jump through.

The Nuggets can get into this if they want to with a package built around Michael Porter Jr. Healthy Jamal Murray, Beal and Nikola Jokic is enough to guarantee an elite offense year round. The funky question I don't have a real grasp for yet: Do you trust Beal or Porter Jr. more on the defensive end at this point?