After weeks of speculation and countless trade-machine ideas floating around, The Athletic's Shams Charania has reported that the Brooklyn Nets and Kyrie Irving are at an "impasse" about his future with the franchise.

Sources: Kyrie Irving, Nets are at impasse in conversations about his future in Brooklyn, clearing way for the seven-time All-Star to consider the open market. Lakers and Knicks expected to emerge among potential suitors.

Inside Pass at @TheAthletic: https://t.co/VbOOtrzdTB

Irving has until June 29 to decide whether to exercise his player option that will be an expected cap figure just under $37 million for the 2022-23 season. To be clear, Irving hasn't explicitly said that he wants out of Brooklyn, and Sean Marks has never said that he wants to move on from the All-NBA point guard.

The Nets would prefer a shorter-term, incentive-based deal with Kyrie Irving, per @JakeLFischer

Dialogue between both sides is expected to remain 'fluid' up until the June 29 deadline for Irving to opt into his $36.9M player option pic.twitter.com/HonP7DgQ09

Basically, Marks wants Irving to opt out oand sign a deal for less money/average annual value for cap space to fill out the roster. The theoretical fit of Irving, Kevin Durant and Ben Simmons has yet to be seen, and one would imagine that the Nets would prefer to give the trio a chance. With the return of Joe Harris from injury and Seth Curry still under contract, Brooklyn could still be the odds-on favorite for an NBA title next season when they are at full strength.

However, if the impasse between the two continues, Marks may very well opt to move on. While remaining in Brooklyn is likely the final outcome of this saga, there are a few other destinations that make sense for both Irving and the Nets to strike a deal.

According to Marc Stein, Irving has had some recent contact with LeBron James about a reunion. (It's worth mentioning that Stein's sources told him it'd be "a stretch" to say L.A. is actively pursuing Irving.) Also, ESPN's Adrian Wojnarowski reported that the Lakers are the most significant threat to sign Irving away from the Nets.

This is an obvious hypothetical destination for Irving, as the Lakers have a player with a similar contract who makes for a logical financial swap. However, swapping Russell Westbrook for Irving would not be something the Nets would entertain. Outside of trying to force a second marriage between Westbrook and Durant, the pairing of Westbrook and Ben Simmons would provide the least amount of spacing that $60 million could buy.

For the Lakers to reunite Irving with LeBron, there would need to be a third team to reroute Westbrook to. One team that seems like a possible match for such a deal is the Indiana Pacers, who are actively shopping both Malcolm Brogdon and Myles Turner. Sending those two to Brooklyn and Westbrook to Indiana is a possibility, but not all that attractive for the Pacers, as they look to build around Tyrese Haliburton as their lead guard. Perhaps if enough draft picks are attached, Indiana may be willing to help.

The Hornets have been mentioned due to the relationship between Westbrook and team owner Michael Jordan, but again, LaMelo Ball plays the same position.

Oklahoma City has been known to take on a bad contract in return for a handful of assets, which neither L.A. nor Brooklyn really have; plus, there's the whole reunion story where he could mentor Shai Gilgeous-Alexander and Josh Giddey.

The Rockets are interesting because it could simply be a three-player deal where each team just gets a new point guard, landing John Wall in Brooklyn.

While it's fun to speculate about a reconciliation between LeBron and Kyrie for another title run, this still feels highly unlikely, and Brooklyn still seems like a better situation for Irving than the Lakers.

A sleeper team in the potential Kyrie sweepstakes is the Los Angeles Clippers. This is the one team that could perhaps assemble a better "Big Three" than the Nets. Irving alongside Paul George and Kawhi Leonard might instantly become the best trio in the NBA. 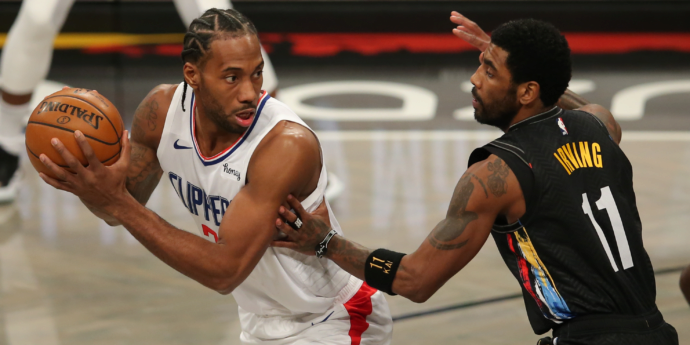 A package of Norman Powell, Marcus Morris Sr. and Ivica Zubac, plus draft compensation could do the trick. If the Clippers do not want to part with Zubac, they could possibly package Reggie Jackson, Robert Covington, Powell and picks.

If the Clippers are able to assemble a lineup of Irving, George, Leonard, Luke Kennard, Morris/Covington, Terance Mann and/or Zubac, this would be a top-five rotation in the league at worst.

Brooklyn taking back Jackson, Powell and Covington would be a nice return of players to fit around Durant, but it still fails to replace the talent of Kyrie. If the Clippers, who also lack draft capital, can put together an enticing enough package to land Irving, this would be an optimal landing spot for him.

The Knicks have been linked to almost every available player via trade or free agency. They have longed for a superstar since the Carmelo Anthony era, and it just so happens that a point guard is also a position of need for the historic franchise.

In order for this to work financially, the Knicks would have to part with some combination of Alec Burks, Kemba Walker, Nerlens Noel, Evan Fournier and Derrick Rose. The Nets would do well to come away with Noel, Walker and Burks in terms of roster fit, but that return is hardly enough talent-wise for Brooklyn. Including the No. 11 pick in this year's draft — plus one of Immanuel Quickley, Obi Toppin or Cam Reddish — may be required.

Kyrie staying in New York and swapping local teams may make some sense on paper, but it would be a step backwards in pursuit of a championship for Irving. At this point in his career, championship rings appear to be the goal for Irving, and he'd be better off working it out with the Nets than making a move to the Knicks.

A team with a long shot to land Irving would be the Washington Wizards, but the franchise has made it known that it is going to do whatever it takes to make Bradley Beal happy. Wizards president Tommy Sheppard mentioned using the No. 10 pick in this year's draft to acquire a veteran point guard.

“I don’t see a rookie starting at point guard for us next season. I could be wrong, but I just don’t see that," Sheppard said in an April interview with Team 980 hosts Chris Russell and Pete Medhurst. "I think free agency or trade is probably the right route to go.”

It has been reported that the Wizards have inquired about Dejounte Murray, Shai Gilgeous-Alexander and Malcolm Brogdon, so clearly they are kicking the tires on notable point guards. While Brogdon may be the better fit next to Beal, the opportunity to add a talent like Irving doesn't come around often. Sheppard has talked about swinging for the fences and pouncing on opportunities when they present themselves.

The Wizards could send Kristaps Porzingis, No. 10 and either Corey Kispert or Deni Avdija to the Nets. Brooklyn could then use the 10th pick to acquire a veteran point guard themselves.

This deal, of course, relies upon Beal opting into his player option rather than the current reports that he has declined his option to pursue unrestricted free agency. The Wizards have not been afraid to swing for a big trade, and they may have the ammo to do just that here.

Ultimately the best possible destination for Irving is the Nets. Durant hand-picked him as his running mate for another championship, and it is in the best interest of all parties involved to figure this out.

As mentioned above, the trio of Kyrie, KD and Simmons has yet to take the floor together; the Nets and the NBA world need to see how that would play out. Kyrie can still get paid, the Nets can still be contenders and in the end, they would keep Durant happy, which should be priority No. 1 for Marks.

Trade speculation is fun, but it is often merely speculation in the end. Kyrie is a Brooklyn Net with a player option that would net the highest possible payday he could receive for the 2022-23 season, as it is unlikely anyone offers him a long-term max contract.

Maybe Irving and Marks find an acceptable restructure of his contract that is more incentive-laden, or maybe he opts in for the full amount. At the end of the day, there is a next-to-zero chance the Nets get a package in return for Kyrie that matches his talent level.