Over the weekend, a video of 16-year NBA veteran Erick Dampier’s son — whose namesake is Erick Dampier Jr. — spread throughout social media, as he dunked on his fellow sixth graders in a game.

The viral clip has been viewed more than 2 million times in just a few days.

Dampier Jr. is seen dribbling the ball confidently up the court, first left-handed before crossing over to his right hand, then easily jumping off of one leg for the dunk as the buzzer went off.

(Quick shout-out to the kid who had the courage to make an attempt for the LeBron James chase-down block. You definitely get an A for effort.)

Afterward, as the scoreboard flickered the game's 30-0 score, his teammates jumped up to chest bump him, and one of them happily gave Erick Jr. a hug and a few pats on the back.

Everyone was buzzing about the moment, and Erick Jr., all weekend. BasketballNews’ Rex Chapman even tweeted about it.

I caught up with Erick Dampier to ask him about his son's viral video, as well as how he is training and preparing Erick Jr. both on and off the court.

Etan Thomas: So I saw the viral video of your son dunking on cats and he’s only in the sixth grade. But first, I wanted to ask you about the working out process you have with him. I was watching some of his videos on YouTube and saw him handling the ball, bringing the ball up the court; then, I saw the post moves like it’s the Clifford Ray and Robert Parish big-man camps we used to go to in the summer time. But talk to me how you have been developing your son.

Erick Dampier: (Laughing) "Yes, shout-out to Clifford Ray and Robert Parish, loved those big-man camps we used to go to. But It’s been great watching [Erick Jr.], staying on him, putting him through drills. I want him to be a complete player; you know, the game is different from when we played. Big men now have to be able to do it all. I put him through a lot of drills and try to keep him in the gym. So we work on dribbling, footwork, lateral movement, skills training, etc. before we advance to shooting and post work. I want him to really work on his all around game, not just back-to-the-basket big man drills, but everything. But the main thing is keeping him in the gym. He plays sometimes with an older team, but he enjoys playing with his friends and the kids he knows as well. But the main thing is keeping him in the gym."

Etan: So you mentioned him playing with his both age group and with an older team, could you go into a little more detail with that? I saw a lot of people on social media asking that question.

Dampier: "Yeah, I saw that too. But, here’s the thing: you want him to enjoy the game and play with his friends at the same time. All of those kids in the clip of the game everyone saw, those are the kids he goes to school with. Those are his friends. So I want him to have his fun with those kids, and also play with an older group in order for him to continuously be challenged and improve."

Dampier: "He plays with a seventh-grade travel team and he plays against eighth graders in the gym, but not on an eighth-grade travel circuit. But yeah, I see people saying that, but he’s still a kid. You don’t want to kill his confidence. You want him to get better but you still want his confidence to continue so it’s a balance."

Dampier: "Yeah may be inching toward 6-6, honestly."

Dampier: "Yeah and I have another son who is right behind him in [the Class of 2034], who has been watching and learning from his big brother his whole life and mimicking the drills I do with Jr., so watch out for him too."

Etan: Oh okay, like Venus and Serena Williams. He’s just waiting for his turn, huh? That’s great. So your son has your namesake and he’s the No. 1 sixth grader in the country... Now this is a little different — because I don’t know if they were ranking sixth graders when we were coming up — but as the No. 1 sixth grader, how do you balance that label given to someone that young?

Dampier: "Well, as far as on the court, I tell him over and over again every day that just because they rank you No. 1, don’t get too comfortable and think you’ve arrived. You gotta work extra hard now because everyone will be gunning for you. You gotta prove you deserve that ranking every time you step on the court, because believe me, the other kids who are good are going to try to go at you and give you their best anytime they play against you. And there are other kids just as big as you, just as tall as you who can dribble, dunk and score like you just waiting for their chance to shine. So you gotta continue to put the work in."

Etan: How do you prepare him for the scrutiny that’s going to come at some point? It’s interesting because me and my son Malcolm have been watching Emoni Bates, and I’ve pointed out the shift that took place. He was built up to be the second coming of KD, on the cover of magazines, nonstop praise, etc. But as you see, this season at Memphis and really starting last summer at Peach Jam, there has been the complete opposite and nonstop criticism. How do you prepare him for that part? Dampier: "We’ve discussed the scrutiny that is going to come, and even started now. Sometimes he looks on his Instagram page (@Edampjr2028)and sees some of the negative comments, and he’s asked why would people say this and he would show me the different comments. I had to tell him, 'Look EJ, there will always be people who scrutinize you and criticize you. In fact, you’re going to have that for the rest of your playing career. You just have to keep working hard and ignore what people say. They criticize everyone, that’s what they do.' But yeah, [I'm] glad you asked that because that is definitely something we have to prepare our children for."

Etan: And it’s so different now. Again, we didn’t have social media back in the day. Ain’t nobody see us play in middle school, but now things are different, so the preparation has to be different — even for someone as young as your son. How old is he?

Dampier: "He’s only 12. But here’s the thing: we’ve been there, so we know what to tell them to look out for. If I had all this preparation and knowledge and tools both on and off the floor growing up..."

Etan: Man! I say that all the time with my son. Like, do you know how blessed you are? But that’s why we have to keep reminding them.

Dampier: "Even teaching him what it means to have real work ethic. Yeah you can play with your friends, play PS4, be talking y’all talk on the headphones — and we didn’t have that capability either (laughing) — but you have to structure time when you gotta take care of your working out and training. And spending time in the gym as well, because that’s the only way you get better. But being able to teach him and guide him in all facets of this process, you’re right. It’s a blessing." 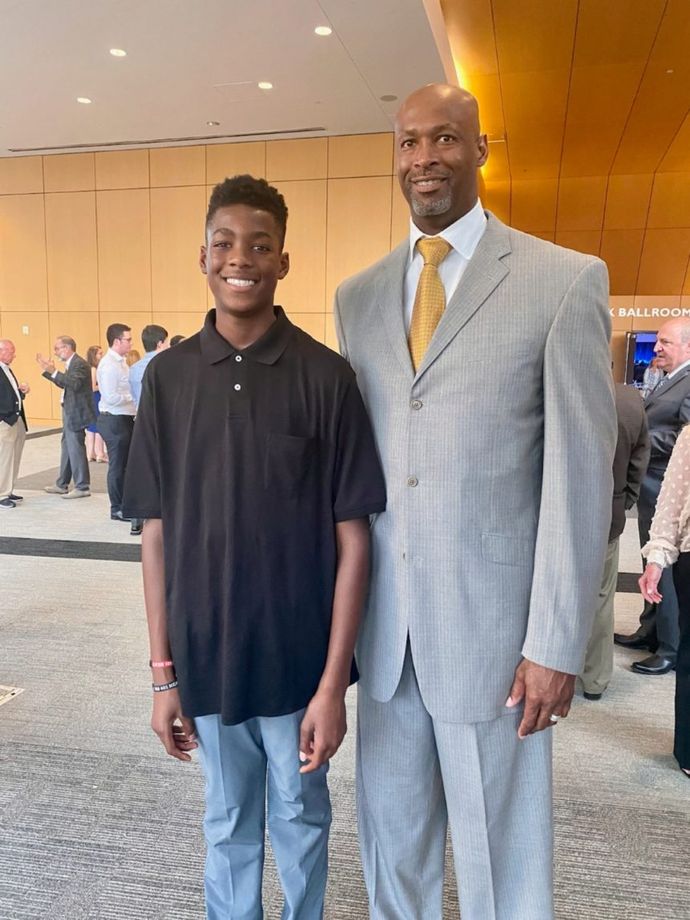 Etan: It’s gotta be a great feeling seeing your little man out there doing his thing. It’s crazy because I’m looking at the YouTube videos of him and I’m like, man, he looks just like you. (Laughing.) There is this expression you have that’s just the Erick Dampier expression after you score. You look up... it’s hard to explain, but it’s your look, and it’s crazy seeing him have that same exact expression.

Dampier: (Laughing) "Yeah, people tell me that all the time. But yeah, it’s great to see. And I’m sure sometimes he thinks Dad is hard on him and Dad is always pushing him. But then, he sees how it’s paying off and he’ll come to me and say, 'Hey dad, could we get some extra practice in, there’s a few things I wanna work on.' And you know how it is — no matter what you’re doing, you’ll drop it all and go work with him. (Laughing) You can be in the middle of an important call, and you reschedule in a heartbeat. I gotta admit, it makes old Dad proud."