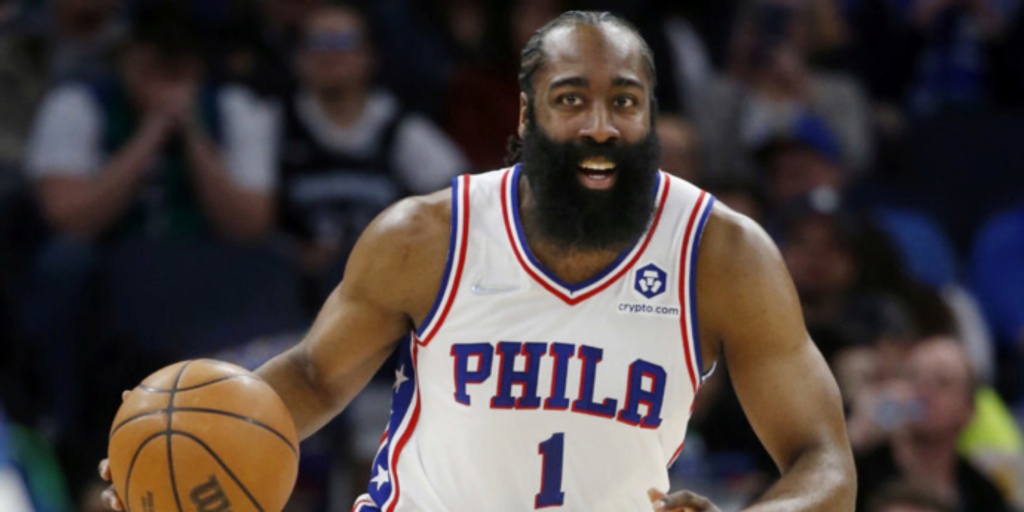 The early returns on the James Harden-Joel Embiid partnership

The future Hall of Fame guard made his Philadelphia 76er debut on Friday night against the Minnesota Timberwolves. And before going further, let me just say: what a bad break for the Wolves, man.

At any rate, the people were ready to see what Harden looked like. Physically, you want to see how he looks since he's been dealing with hamstring issues dating back to last postseason; emotionally, because the level of engagement shown from him during the latter stages of his Nets run was ... I mean, we can say it — it was shameful at times. On a different team, with a different superstar and reunited with Daryl Morey, it was fair to wonder how juiced up he was going to be.

And beyond that, what the heck was the partnership with Joel Embiid (that different superstar) going to look like? Seamless? Spotty? It's game one, after all.

We saw some encouraging stuff on Friday night. The Sixers absolutely blasted the Wolves 133-102. Harden (27-8-12) and Embiid (34-10-3-1) took turns wrecking the defense, and even hooked up a few times — north of 20 times when combining handoff and ball screen possessions — to do it.

Let's take a look at how the two operated together.

This was the smaller sample of play types — the Sixers had five possessions featuring a handoff between the two, per Second Spectrum.

The method of choice was Chicago action — a pindown that flows into a handoff. We got multiple instances of Embiid handling the ball above the break, with Tobias Harris or resident non-shooter Matisse Thybulle prying Harden open with a screen before jetting into the handoff with Embiid.

Peep the subtleties of the spacing on the possessions above. On the first action, Harris cuts through after setting the screen for Harden, setting up an empty corner for the star duo to work with. 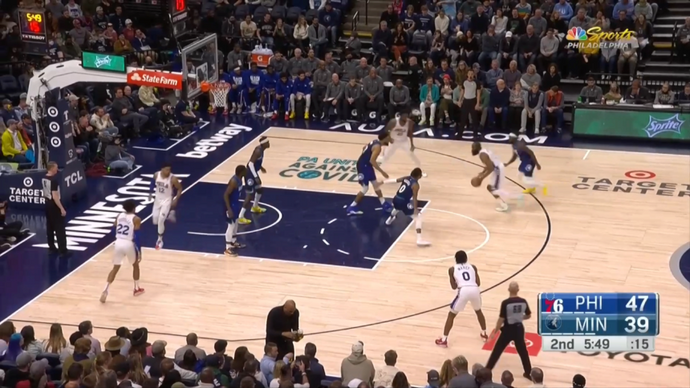 Harden ends up taking the floater in the first clip — Karl-Anthony Towns doesn't fully commit to Harden, opting to lunge while backpedaling — but look at the weakside. With Harris relocating, Thybulle positions himself to set a pin-in screen on Anthony Edwards. Edwards is tasked with defending both players (splitting the difference) since Jarred Vanderbilt rotated over to provide some relief; pin-in screens are a great counter to that extra help. 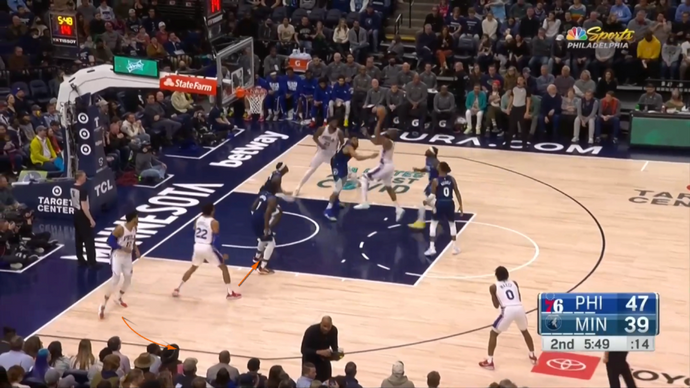 On the second clip, you get the inverse. Thybulle sets the screen this time and hangs around the perimeter. Harden is able to fully engage Towns on the drive, opening up the lob to Embiid. D'Angelo Russell sinks into the paint due to Thybulle's lack of shooting gravity, but you tell me who's gonna win this particular jump ball. 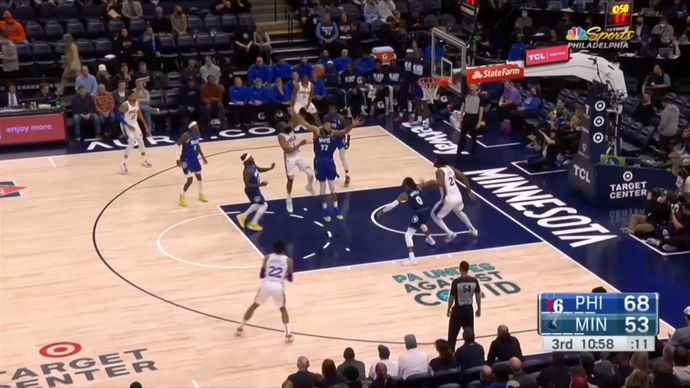 This is where the fun stuff — or if you're a Wolves fan/observer, the infuriating stuff — happened.

Though they've toned it down as of late, the Wolves still show two to the ball in pick-and-roll pretty often. That requires a bunch of chemistry and connectivity on the backline to put out fires. Running that style against a passer like Harden, and a short-roll (or pop) terror like Embiid posed some problems, buddy.

When you think of a ball-handler getting trapped (or hard-hedged against), the natural progression seems to be "big catches the ball on the short roll and finds the best passing outlet against a 4-on-3, 3-on-2, or 2-on-1, depending on the spacing."

Embiid's different in that he's fine with popping against that look. On top of that, he can shoot off the pop or drive out of it. He's also devastating because his short roll reps turn into him bullying a much smaller helper.

Think about it: if Embiid's man — a large human being that probably can't guard him anyway — is 25ish feet from the basket, who the heck is stopping his rampage?

This ends in a Harris miss, but you can see the issue. Embiid pops here and has the shot if he wants it. He decides to drive instead, bullies Towns (aka the large human that can't guard him anyway), draws a double and makes the easy kick.

We get more of a traditional roll from Embiid this time. We also get no tag or rotation from Vanderbilt, though that's also part of the fun for Philly. Vanderbilt has to choose between rotating to Embiid (and likely getting bullied anyway) or staying home on Danny Green, a plus-shooter.

(As a brief aside, I was pretty impressed with how the Sixers spaced the floor in this one. Ultimately, with Towns playing high against Harden, Russell is once again the last line of defense against Embiid.

The Wolves would attempt to do different things. They went to a zone in the second half, but Embiid was able to find the soft spots in it. The middle is generally the vulnerable area of a zone. Offenses want to get into the middle of the floor and set up high-lows or create easy kick-outs, but  Embiid can just get a bucket himself.

There was also drop coverage mixed in, but that poses some pretty tough problems. In general, Harden is insanely good at getting downhill, engaging the big (and tempting a third defender to offer extra assistance), then making the defense wrong. Embiid isn't a typical lob threat, but he can bully dudes in the intermediate area.

On the Wolves side, Towns just ... isn't good as a drop defender. That reality is what led to their aggressive scheme shift to begin with. That, combined with some ill-timed (or non-existent) rotations made it easier for the Sixers to generate good stuff.

Anthony Edwards gets knocked off his path. Towns is doing ... something as he backpedals in his drop. Taurean Prince is a beat late to show help. All things considered, the Wolves end up in a decent spot with three defenders converging on Embiid. So, of course, they foul him.

I'm curious to see what the Harden-Embiid combo looks in a tougher context than the Wolves provide, but the skeleton of a successful partnership was on full display.

And it's pretty scary.