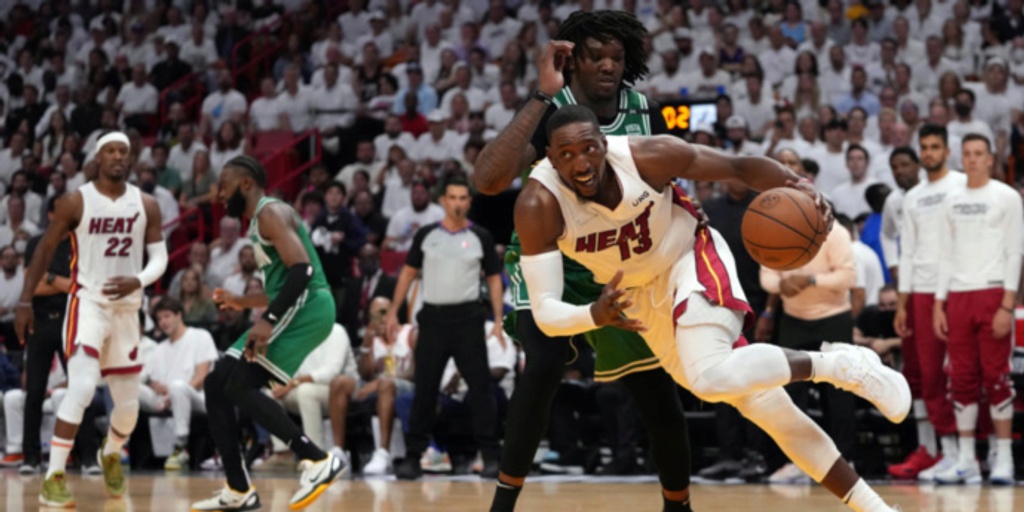 Over the years, I like to think I’ve learned a lot about the game of basketball.

And while I still have a lot to learn, I think I have a pretty solid formula for how one should go about learning about the game of basketball.

It’s simple, you watch it (obviously), look through stats, read about it, listen to podcasts about it (like The Dunker Spot), and most importantly, you take notes. (It doesn't stop after school!)

And with that being said, let's sift through some of my game notes from Game 1 of the Eastern Conference Finals!

As we are all aware by now, the ball-screen has become an essential cog in the machine that is modern-day NBA offenses. So, it would stand to reason that the coverages deployed against this play type are paramount to the structure of today’s defenses.

Boston continued riding the wave from Game 7 against Milwaukee, opting to start the series in a drop against Miami. By doing this, the Celtics were also taking a page from their former coach, Doc Rivers.

As Couper Moorhead pointed out, the Philadelphia 76ers chose to guard ball-screens 2-on-2 with Embiid in a drop, which, in turn, allowed their ancillary defenders to tighten up on shooters and avoid forfeiting open three-pointers. (The Heat lead the league in percentage on open threes in the regular season).

Jimmy Butler and Tyler Herro both burned this configuration at times. But for now, I would continue mixing that formation in with switches until the Heat prove they can consistently bury pull-up threes while also fielding a competent defensive lineup.

Meanwhile, Miami came out the gates switching screens pretty often, and with little resistance. This led to favorable matchups for the Celtics’ ball-handlers, who cashed in on these opportunities by way of paint touches and lay-down passes to their newly reincarnated big man, Robert Williams III.

In the second half, the Heat continued switching when appropriate, but they also started sending two to the ball more often. And that — coupled with their tenaciousness and supreme length — led to a lot more turnovers (16 compared to 7 in the first half).

An interesting wrinkle to this is that Boston did a great job of parking good three-pointer shooters one pass away from its ball-handlers (something the Brooklyn Nets struggled doing in their first-round matchup against the Celtics). So, the natural adjustment for Boston to make in Game 2 should be having the blitzed initiator slow down and survey his options to find that open shooter when the help comes to him.

When most of us think about matchup hunting, the image that most likely comes to mind is that of Luka Doncic demanding a ball-screen from a teammate being shadowed by a relatively weak defender. Said defender then switches onto Doncic, and the Slovenian begins to play with his food a bit before swallowing that matchup whole.

The problem with this tactic is, if the defense doesn’t immediately concede the switch, you're forced to re-screen until the team finally waves the white flag. This tug of war eats up precious seconds from the shot clock. And eventually, if they can get the shot clock to under 10 seconds, even the most matador-esque defender has a solid chance of inducing a suboptimal shot.

A more natural/cohesive way of exploiting weak points is by setting up these mismatches off-ball.

In this linked clip, you see Boston going at Max Strus. To his credit, he’s at least a solid defender. He’ll serve as their version of a Pat Connaughton — an occasional victim of the C's attack. Their real target moving forward (the Grayson Allen of this operation) will be Herro.

(*Whispers from the back corner* Notice how Herro was on the bench for the entirety of the Heat’s 22-2 run in the third quarter. Coincidence? I think not...)

Boston did some nice things in this department, but the Heat were the true masters of the dark arts in Game 1. Miami spent a bulk of the second half going at the likes of Derrick White and Payton Pritchard by using Butler as a screener whenever one of them was matched up with the ball-handler (particularly when that person was Gabe Vincent).

Butler used these opportunities to build up steam going downhill (he commandeered an Embiid-ian 18 free throw attempts) or to operate in isolation with an empty corner.

He was magnificent in Game 1, but it's worth pointing out that Pritchard saw 30-plus minutes in this game. With Marcus Smart listed as probable for Game 2, it will be interesting to observe these actions unfold with the Defensive Player of the Year patrolling the battlefield.

As we mentioned earlier, the Celtics manufactured a ton of dribble penetration in the first half, leading to 42 points in the paint on 21-of-26 shooting.

In the second half, Boston was relegated to 6 points on 3-of-16 shooting from that area of the floor.

Well, the Heat aren’t blessed with a basketball-swatting machine like Williams IIIl; they finished dead last in the league in blocks per game during the regular season. So to compensate, they turned to less traditional means.

This all started with their decision to send two defenders at the ball, which led to fewer defensive breakdowns in the restricted area. They also ICE'd a few ball-screens to further enforce that "no middle" philosophy.

Bam Adebayo and PJ Tucker did an admiral job of denying entry passes into the paint, and when those passes did find a way through, the Heat used their length and great hands to swipe at the ball and create turnovers.

One of the more subtle adjustments in the 2nd half from Miami was the decision to try and preemptively swipe down on the ball rather than contest shots at the rim vertically.

If you don't have the firepower to meet them at their apex, you may as well not let them even get there. pic.twitter.com/55GskSOess

That was one of the most crucial adjustments the Heat made in the second half. In the first half, Williams III was making a killing because no one on Miami could match his insane verticality. However, great defenders know (or at least figure out quickly) that when you can’t challenge a shot straight up, you need to prevent the shot from taking place altogether. And you do this by getting your hands on it while it's still down by the defender’s waist. It’s safe to say the Heat have a ton of smart defenders.

Oh, and it also helped that Bam decided to catapult a few shots into the spacetime continuum.

See, taking notes is important! Look how much you can digest from making notes about things while you watch and read about a game.

Now, get your pen and paper (or reMarkable) out for Game 2 on Thursday.