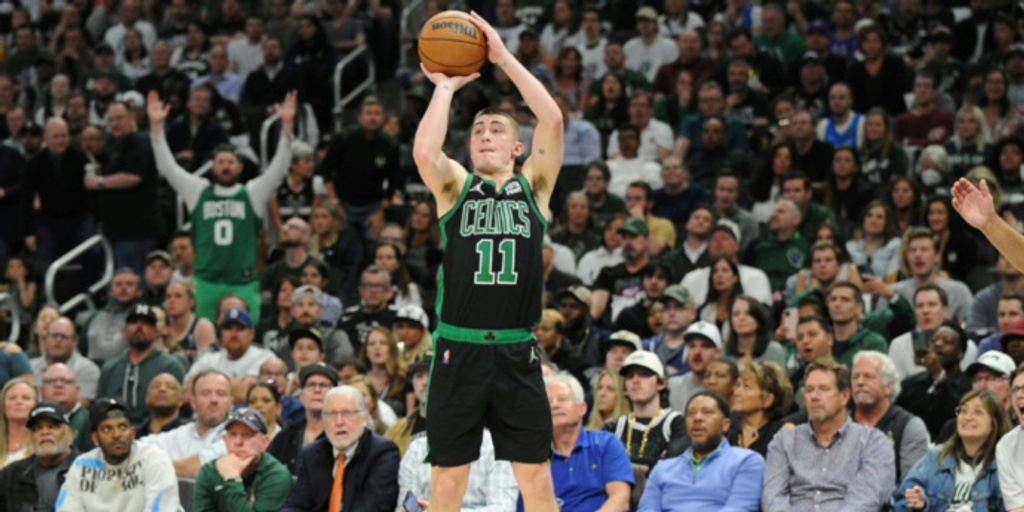 NBA Stats Notebook: The Celtics and the Payton Pritchard conundrum

Even as the Boston Celtics led in the first half of Game 1 of the Eastern Conference Finals, it only felt like a matter of time before the scoreboard would catch up to the Miami Heat offense.

Miami basically has a 105 offensive rating in the half court and the halftime show was almost entirely about offensive concerns.

Then, the Heat exploded in the second half, opening on a 22-2 run and never looking back. They steamrolled the Celtics on both ends and Jimmy Butler took over en route to 41 points. Miami finished with an impressive Offensive Rating of 112.2 on half-court possessions, per Cleaning the Glass. That ranks in the 88th percentile of playoff games this season; according to our Nekias Duncan, the league average is 95.6 points per 100 possessions.

The Heat's success transcends their normal half-court production. Even with the Game 1 win, Miami is still averaging just 95.0 half-court points per 100 possessions in the playoffs, and the team's regular season rating was similarly low (97.6). And even taking the scope back to a base level — how many people expected the Heat to drop 118 points in the first game against one of the league's best defenses?

Sure, the Celtics were missing two key cogs in Marcus Smart and Al Horford, but it was still an impressive effort. It also exposed the dilemma Boston has with Payton Pritchard.

The second-year guard is the Celtics' best shooter in a rotation that sometimes needs a perimeter lifeline, and simultaneously, their worst defender in a scheme that can't afford porous perimeter defense.

Nekias was all over this in his pre-series scouting report and had a noteworthy stat after Game 1:

Pritchard was targeted 16 times in PnR tonight, and the Heat scored well over 1.2 points per possession on those trips 😵‍💫https://t.co/Sh3NLiMvTK pic.twitter.com/eTxYIQKXDI

The Heat went after Pritchard, who logged his postseason high with 30 minutes in the loss. They put him through the blender on screens and forced him to play chaser. At 6-foot-1 with a 6-foot-4 wingspan, Pritchard just doesn't have enough length to overcome falling into recovery mode.

Prtichard also just struggles fighting through screens despite being fairly built for his size (listed around 200 pounds). That fourth clip is telling; he's pretty powerless against Butler, and it leads to an easy Max Strus three-pointer. Pritchard and Jaylen Brown could have communicated better on that play and had Brown chase after Strus, but it seems the job was supposed to be Pritchard's.

Miami then attacked Pritchard on the ball during its second-half surge.

When Butler found 1-on-1 chances against Pritchard, the Heat superstar was able to get into his bag with relative ease. In the second clip, Pritchard stays up tight against Butler, and it looks like solid defense. But even that effort appears meaningless. Butler made one basic spin move, didn't need to counter and rose high above the contest for a confident make.

This isn't to say Pritchard is the primary reason for Boston's loss by any means. But he is going to be a matchup Miami hunts throughout this series. The Heat have players who are unbothered by his defense (Butler, Tyler Herro and Victor Oladipo) and players who can wreak havoc against him away from the ball (Strus, Gabe Vincent).

The Celtics are going to be challenged when Pritchard is defending. Their trade-off is that he is, in many cases, their spark and offensive savior from long range. Through the postseason, opponents have dared complementary players like Grant Williams, Derrick White, Horford and Smart to shoot as defenses load up on Jayson Tatum and Brown. The one supporting cast member they cannot forget about is Pritchard.

The 24-year-old has blossomed into one of the most efficient perimeter shooters in the entire NBA. Among all postseason players with at least 20 pull-up shot attempts, Pritchard ranks fourth with a 58.3% Effective Field Goal percentage. He ranked eighth among 171 players with at least 100 pull-up attempts in the regular season at 53.6%. Then, he turned around and made 42.8% of his catch-and-shoot threes in the regular season and finished 13th in overall three-point percentage (41.2%).

Pritchard has limitless range and enduring confidence. His threes came from 26 feet from the basket on average, according to The BBall Index, putting him in the 82nd percentile at his position. Aside from maybe Tatum, Pritchard is the only Celtic who could hoist up deep triples without inciting grimaces from fans.

His overall offensive game, though, is a bit more complicated.

Pritchard is a rock-solid passer. He's dished out 23 assists against just 3 turnovers in the playoffs so far; that 7.67 assist-to-turnover-ratio is the best among anyone who has been in at least eight playoff games. When he drives to the basket, he's able to make the right kick-out plays. The problem is his drives aren't threatening to opposing defenses.

Second Spectrum says that 221 players drove to the basket at least 150 times in the regular season. Pritchard passed out of his drives a whopping 60.7% of the time — the fourth-most of any such player. When he did attempt a shot, it didn't go so well; his 37.7% field goal percentage tied for 16th-worst. In his 173 regular-season drives, he scored 45 points. That 26.0% rate is, again, the fourth-lowest of the 221 qualifying players.

Pritchard has scarcely needed to drive the ball for most of the postseason, and had actually gone 4-for-4 on driving shots in the first two rounds. Then, we got to the conference finals, where he went 1-for-4 in Game 1.

The burst just isn't there for Pritchard, who pounds the ball hard and tries to lower his shoulder without much success. Caleb Martin is a solid defender who walled Pritchard up in the first clip. Herro wasn't fazed in the second clip, and on an empty-corner drive, Bam Adebayo has plenty of time to help. Without a strong first step, Pritchard can't use his shooting threat to successfully attack closeouts. He doesn't get the head start that others, even Williams and White, receive.

Speaking of White — he'll be out for Game 2. Smart's availability is still up in the air as of this writing. That's possibly two dynamic attacking guards that the Celtics won't have in a critical second game, which means even more responsibility falls on Pritchard's shoulders.

Boston needs Payton Pritchard in its rotation. The perimeter prowess and reliable passing help keep a volatile offense from falling off the rails. But Ime Udoka and the Celtics' coaching staff have to figure out how to keep Miami away from matchup-hunting Pritchard and keep him in advantageous offensive positions. He'll be an X-factor in Game 2 and a swing player for the remainder of this series.

But, 401 draftee couldn't play a single game in NBA pic.twitter.com/rXttO2xYRH

What can we learn from identifying who takes open shots most often in this year’s playoffs? A combination of secondary creators, play finishers, and star initiators lead the way: pic.twitter.com/U3LEd0LvKq