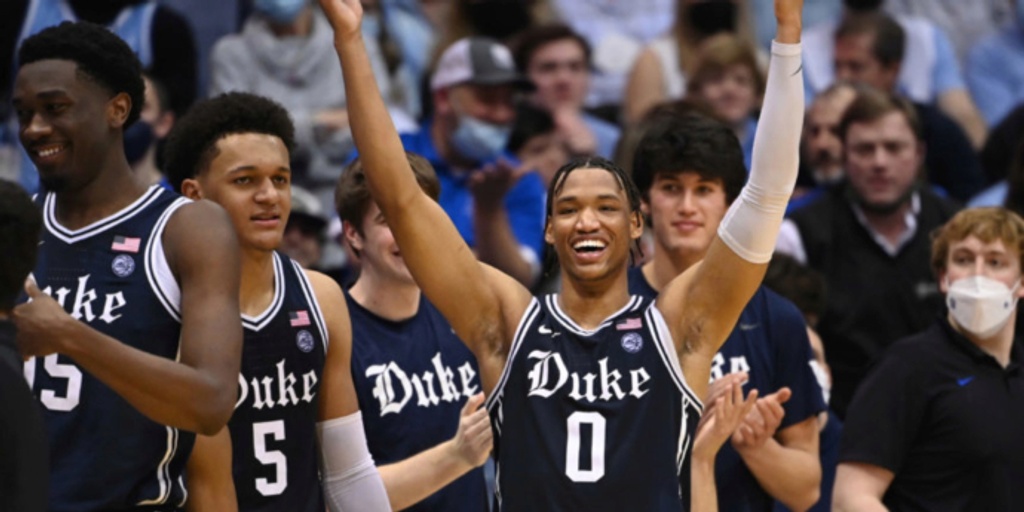 In Coach K’s final trip to Chapel Hill, the Blue Devils (19-3, 9-2 ACC) took care of business with a big win on the road. Winning 87-67, AJ Griffin led all players with 27 points on 11 of 17 from the floor. Oklahoma transfer Brady Manek led the Tar Heels with 21 points.

Duke has now won six in a row and is ranked 12th in Adjusted Efficiency. They are headlined by superstar freshman and potential No. 1 pick in the NBA draft, Paolo Banchero. The roster is loaded on all levels and filled out by other potential 2022 selections: Wendell Moore Jr., Mark Williams, Griffin, and Trevor Keels.

In their last two games entering this one, UNC averaged 95.0 points per game and 13.3 made threes, but it was Duke that caught fire quickly. They jumped out to a 13-2 lead behind a pair of Banchero and Griffin triples, until Brady Manek hit his 50th three of the season.

A key moment came early, as Bacot picked up his second foul at the 16:55 mark while attempting to close out on Banchero. Duke would hit seven of its first eight shots from the floor to take a 19-5 lead. A 31-8 Duke lead was quickly cut to 37-23 as Manek hit his fourth triple and UNC looked to steal back some momentum.

Griffin made a statement to open the second half with another triple, as Duke would score the first 10 points and take a 49-28 lead within 3 minutes.

The game was never again in reach for the home team, as Duke held on for the 87-67 win. Moore Jr. and Banchero both had 13 points. Williams posted 9 points, 6 rebounds, and 2 blocks. Bacot finished with 12 points and RJ Davis ended with 11 points for Carolina.

In only his second game since Jan. 19, Keels took the floor again and although he wasn’t highly active, did flash his shooting from deep and finished with 11 points, 3 rebounds and 2 assists.

Coach K is now 50-46 all time against North Carolina.