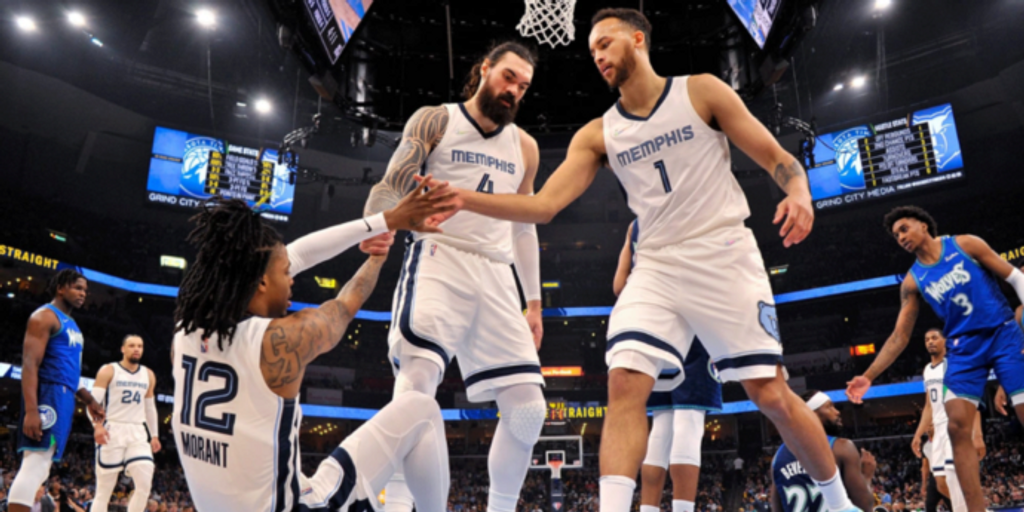 Down, but not out: 5 keys to a bounce-back Grizzlies victory in Game 2

On Saturday afternoon, the Minnesota Timberwolves stunned the Memphis Grizzlies 130-117 at FedExForum to take a 1-0 lead in their first-round, best-of-seven Western Conference playoff series.

The Timberwolves made it clear to the Grizzlies that they wouldn't be taking this series lightly.

After having a week off, Memphis was rusty and lacked energy to start. The Wolves exploited the rust, had more energy, gained momentum and snatched home-court advantage from a team that protected its home floor (30-11) in the regular season.

Grizzlies guard Desmond Bane said it best after the loss: "The game is going to be decided on 50-50 balls. Physicality is something that we felt like we addressed coming into the series... We’re going to have to get grimy out there to win a playoff series."

The Grizzlies have had a habit of getting the better of opponents. In the regular season, Memphis defeated opponents a record 14 times by 25 points or more, and had been used to demoralizing teams early.

Unfortunately for the Grizzlies on Saturday, the plan backfired and the Wolves were up for the challenge.

"This game and this series is going to be decided on 50-50 balls and rebounding,” Memphis wing Dillon Brooks said. “That’s the real grit-and-grind sh*t. So we have to figure out how to be in the right spots, and play with the physicality they played with."

KEYS TO A BOUNCE-BACK GRIZZLIES VICTORY

DEFENSE HAS TO BE BETTER

One of the top defenses in the league gave up 130 points. The Grizzlies became the first team since 1973-74 to lead the NBA in rebounding, steals and blocks as a result of their tenacious defense during the regular season.

What we saw in Game 1 wasn't the same Memphis defense that had been shutting down dynamic offenses since early December.

Return to the basics: Rebounding, steals and second-chance points are their bread and butter.

Minnesota outrebounded the Grizzlies by a total of 46 to 35. The Wolves also had the second-chance edge at 19 to 14. Minnesota was well prepared and beat the Grizzlies at their own game.

The Grizzlies also gave up 16 three-pointers while only connecting on 7 of their own.

“They hit 16 threes. That’s what they do,” Brooks said. “We got to fly out to shooters, know exactly what shooters are out there... We gotta be on that next game and bring our mentality, bring our swag into the arena. Put our hard cap on and get ready to go out there and bang with the big fellas.”

Try to contain Anthony Edwards as much as possible with Brooks at the primary defender.

He spent most of the game locking down D'Angelo Russell, who was limited to 2 of 11 from the field. According to NBA.com matchup data, Edwards went 3 of 7 when Brooks was the primary defender on Saturday.

KEEP STEVEN ADAMS AWAY FROM KARL-ANTHONY TOWNS AND ANTHONY EDWARDS

Game 1 was Adams' worst contest since he's been with the team. He finished with 0 points, 3 rebounds and 3 assists while getting cooked on both ends of the floor in his 24 minutes of play. Adams led the league in offensive rebounds at 4.6 per game, which usually equates to second-chance points for the Grizzlies. KAT went 6 of 8 when guarded by Adams, while Edwards lit the big man up on 4 of 5 shots.

The Grizzlies had better success defensively when Kyle Anderson and Brandon Clarke were on the floor together. The pairing had a Defensive Rating of 68.2 in its 10 minutes on the floor, and Memphis was able to make the game close when the two played together.

But will it be right to limit Adams' minutes? That's something Grizzlies head coach Taylor Jenkins and his staff have to figure out.

On 4 of 13 shooting, Jaren Jackson Jr. scored 12 points, had 7 blocks and grabbed 4 rebounds. Due to foul trouble, he played only 24 minutes. As a result of three costly fouls, he was limited to just eight minutes in the first half.

Jackson knows he has to do better. On Monday, he summed up his performance with harsh honesty.

"I was pretty shitty overall," Jackson said after practice. "I gotta be better – seven blocks don’t mean nothing if we lose and they put up 130."

Jackson also lost his composure and picked up a technical foul after shoving Jaden McDaniels.

Karl Anthony Towns dunked on Jaren Jackson Jr so hard, JJJ pushed a different player that didn't dunk on him 😂😂😂😂

He can’t be baited into doing things out of character. Because of his proclivity for drawing fouls, JJJ expects the Wolves to make an effort to remove him from the game.

"That team takes a lot of charges, kind of like Boston" Jackson reiterated. "You've just got to move around them, Euro (step), make better moves. Can't fall into their traps because that's a good play by them."

It will be a first-round exit if the 22-year-old forward is in constant foul trouble and not producing on the offensive end. He has to be available, period.

According to a report from The Commercial Appeal’s Damichael Cole, Jackson texted Ja Morant after Saturday’s loss: "I got you."

Jackson says he will be ready.

Jenkins needs to go with some of the scrappy guys who contributed all season off the bench. One such guy is John Konchar, also known as Jitty. Known for his hustle plays, he is somebody who gets all the 50/50 balls, deflections and is able to defend. Konchar would bring a spark off the Grizzlies bench that was lacking in Game 1.

The undrafted guard out of Purdue Fort Wayne was a problem for the Wolves on Jan. 13, when he gave Memphis a huge lift off the bench with 15 points (6 of 7 from the field, 3 of 4 from three) and grabbed a career-high 17 rebounds.

It might be wise for Jenkins to have Konchar on the floor at some point during Game 2.

De'Anthony Melton, frequently called "Mr. Do Something," must do something to help his team win games. In just 14 minutes of play, the Grizzlies main disruptor had a less-than-memorable night with just 2 points along with a rebound, assist and steal each. Since the All-Star break, Melton has averaged nearly 13 points per game and 42.9% from beyond the arc.

Melton also can guard multiple positions, infiltrate passing lanes and block shots. He averaged 4.5 deflections and 2.3 steals per 36 minutes in the regular season.

HAVE THE OFFENSE CLICKING

Their mantra is "everybody eats." The Grizzlies were 18-1 this season when they had 30 or more assists. In the series opener, the Wolves assisted on 32 shots while Memphis only had 25. In the regular season, the Grizzlies set a mark of 41 assists twice.

Jenkins pointed out the struggles they had on offense.

"I felt like we missed plenty of opportunities to make the early pass... We’ve got to have better balance," he said. "We scored great in the paint. We got to the free-throw line. It’s going to be hard if we’re giving up 16 made threes and we’re only making seven. So, we’ve definitely got to find a way to get more balance on the offensive end.”

With that, Morant put the responsibility on himself for not finding his teammates for more three-pointers.

"I feel like that’s on me though. Our offense was fine. The shots we missed were pretty much wide open threes, normally shots we make, and that’s the difference maker of the game," the All-Star guard said.

"They made 16. We only made seven. My job is to... I’m about to look at film and find ways for us to get those easier shots. And, that’s pretty much my downhill attack, drawing the help and kicking out to my shooters.”

Memphis becomes extremely difficult to beat when the team is able to distribute the ball effectively, create open looks and limit its offensive mistakes.

To win Game 2, the Grizzlies should concentrate on the strengths that helped them win 56 games. It's do-or-die time, and they can't afford to go down 2-0. They've got to embrace the moment and play every possession as if it's their last when every loose ball provides an opportunity to get more chances.

With all that said, the Grizzlies remain resilient.

"It’s a very long series. It’s going to be a really long run here," Brooks said. "It’s just about watching film as a team, getting back together, seeing what we’ve got to do in the next game from here on out in this series. That’s something that we’ve done great the whole year.

"I think that we’re going to be fine from here on out. We’ve just got to watch some film together and learn from it."

The growl towel for Game 2 says "Ain't No Running in the M," a phrase made popular by Morant after a victory against the New York Knicks in early February. The Grizzlies are known for not backing down from any opponent, and the Wolves are not scared either

The litmus test begins at 191 Beale Street on Tuesday night. Will the Grizzlies be able to get back that swagger they had in the regular season?