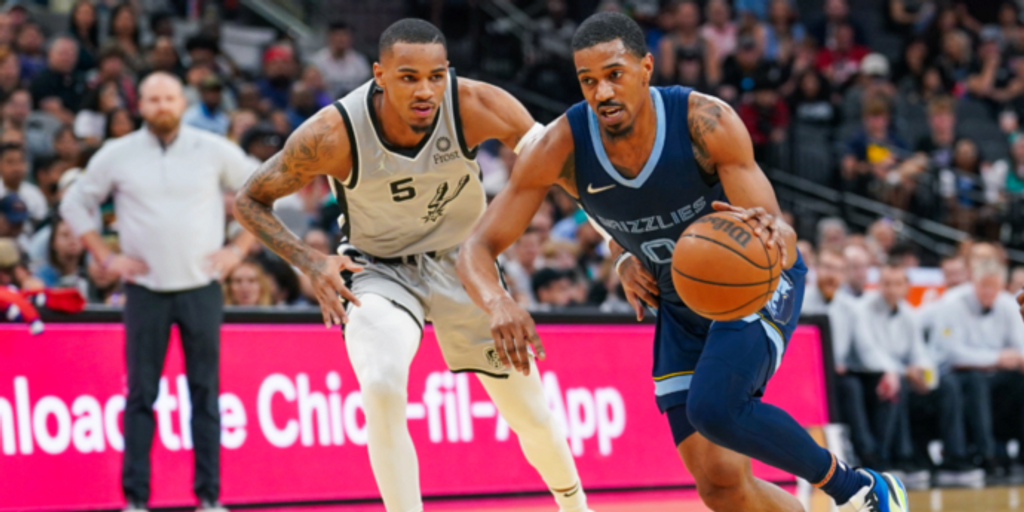 What to make of De'Anthony Melton's recent play with the Grizzlies

In the NBA Playoffs, stars often shine the brightest, with the biggest names often delivering on the biggest stage. That's to be expected, but truthfully, games are often won and lost because of the production from key role players.

Throughout the regular season, coaches may roll out a 10- or 11-man rotation consistently, providing ample rest for everybody as the season goes, as well as ensuring the development of younger players. But as the postseason kicks off, that rotation shrinks down to about eight guys playing significant minutes.

For the Memphis Grizzlies, De'Anthony Melton is one of those essential bench pieces that has helped Memphis lock up the No. 2 seed in the Western Conference. In fact, Memphis is now 22-4 when Melton scores 10 or more points off the bench; last season, Memphis was 16-5 in the games Melton scored double digits. So that's a pretty good indicator of the impact he has on the team's success.

The 23-year-old guard has earned a couple of nicknames over his time in Memphis. Bally Sports Southeast analyst Brevin Knight calls him "Mr. Do Something" because Melton is always contributing, even when he is not scoring. But when he is scoring, Melton has become known as "Microwave Melt."

Melton is the prime example of a binge scorer.

From November through January, De'Anthony shot 29.5% from deep on 169 attempts. He began to turn it around in February, shooting 43.8% on 48 attempts. During the month of March, Melton was on an absolute heater, shooting 47.1% on 87 attempts.

De’Anthony is only the 8th NBA player since the 83-84 season to have 5 straight games with 4+ 3s without starting a a game during the streak.

His 26 total 3s are one of the five highest totals by a bench player over any five game span since 83-84 as well.

Melton extended this 4-triple streak off the bench to six straight against the San Antonio Spurs on March 30. Even more impressive about this stretch is that he's shot 50% or better from deep in seven straight games and in eight of his last 10.

His ability to knock down the deep ball is crucial to the Grizzlies' spacing. With Steven Adams providing no ability to stretch the floor, and Ja Morant needing space to get downhill and continue his unbelievable paint scoring, Memphis needs someone other than Desmond Bane to make defenders think twice about helping.

Currently, this is how the team's three-point shooting lines up without its top two snipers (Bane and John Konchar).

Jones and Morant do not share the floor together often; however, their success in a small sample size this season may lead to Grizzlies head coach Taylor Jenkins playing them together in the postseason to take pressure off Morant and provide that aforementioned spacing. (Williams is likely to have his minutes diminished in the playoffs as well.) Come playoff time, Memphis is poised to run a nine-man rotation with Jones, Melton, Anderson and Brandon Clarke coming off the bench.

As the numbers suggest, the Grizzlies struggle to shoot the ball. They lead the league in a lot of categories, but simply cannot convert from downtown outside of Bane. So, quite frankly, Memphis needs Microwave Melt to carry over into the playoffs.

Last season, Melton fell into one of his cold spells as the playoffs started. After winning the 9/10 game, and subsequently knocking off the Golden Warriors for the No. 8 seed, Memphis ran into a historically efficient Utah Jazz offense and simply could not keep up. Melton, at times, was unplayable due to his poor shooting in the series. Outside of Game 4 in Memphis, in which he went 3 of 6 from distance, Melton made just 3 of his 14 shots from deep and went 6 of 22 overall.

It was unexpected and certainly the worst case for the Grizzlies. In the months of March and April 2021, Melton shot 46.7% from deep on 107 attempts. But his frigid stretch hit right after. In the 10 games in May, Melton shot 30.8% on 3.9 attempts per game, and his streakiness reared its head at the wrong time.

For Melton, his shooting woes are almost always mechanical issues. Balance is crucial for jump shots. The ability to have a balanced base and rise straight up increases the likelihood of a made shot, so any lean towards the left or right then has to be accounted for on the trajectory of the ball.

Say your weight is evenly distributed (50-50 on each leg), and you rise straight up on the shot; no other adjustments on the shot must be made. If a right-handed shooter has a tendency to distribute his/her weight 60-40 in favor of the left leg — that slight lean left — it means the trajectory has to have a counter-adjustment to the right to compensate.

In an interview with DaMichael Cole of the Mempis Commercial Appeal, Melton spoke about his own adjustment. "I would say for me just making sure my base is wide. Make sure I got a solid, good foundation to start there because I used to bring my feet in too close," Melton said.

A shoulder-width base is almost a sure-fire way to get as close to a 50-50 weight distribution as possible.

There are a couple of things to look for on this first clip. In regards to his feet, this is what Melton had been doing for much of his career, bringing his right foot in too close to his left and fighting his own body for balance. Then, he receives the pass shoulder-high, but brings it below his waist to load, adding more action than needed. Finally, though his release does not seem to have the hitch it did in 2020-21, his timing at the apex of his jump is off a tick.

This is another catch-and-shoot opportunity here for Melton, but it's in transition, so his momentum is carrying him forward. He overcompensates for the positive momentum, missing it on the front of the rim, attempting to take a little off of the shot. The timing of the release is better here, as he releases it just before the apex, but his knees are almost touching as he brings his right foot in too far once again.

Fast forward to March 23 when Melton hit a career-high 6 threes against the Brooklyn Nets. This angle gives you a great picture of what his mechanics are focused on. Many coaches at the youth levels teach their players to have their "toes pointed towards the basket," or to be square. That actually complicates the shooting motion. Notice the slight left turn of the feet. This small mechanical adjustment allows for the shooting elbow to be more comfortably and naturally aligned with the rim.

The adjustments with his feet are noticeable. Rather than having his left foot planted on the catch and bringing his right foot in to initiate the shooting motion, Melton receives the pass with a slight two-footed hop that centers his weight on a more even stance. This allows for him to rise straight up with a fluid release that is on time.

The playoffs are around the corner, and the Grizzlies should not expect 50% shooting on 6 to 8 attempts per game, but even 36% on 4 to 5 triple tries would go a long way throughout the gauntlet in the Western Conference.

De'Anthony Melton is an X-factor to watch when the postseason begins on April 16.