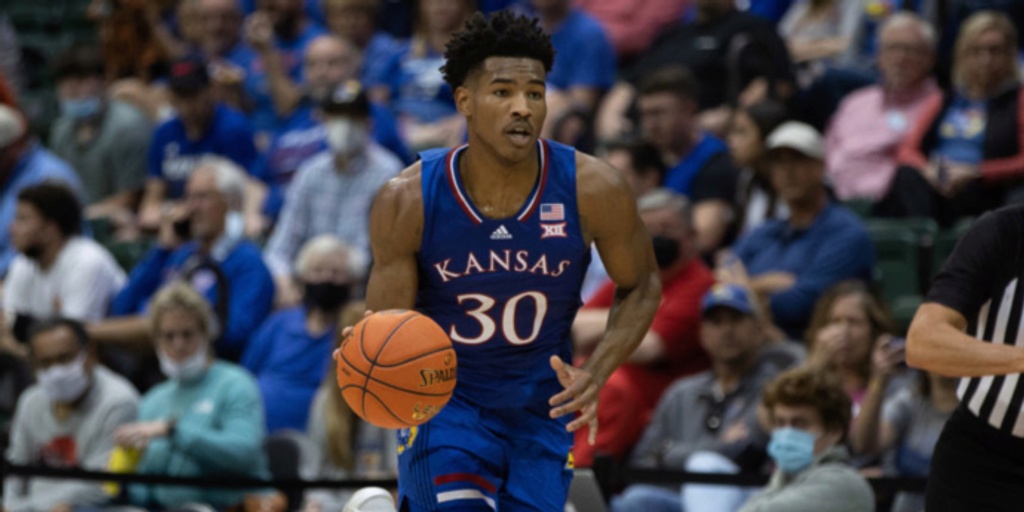 Every year, there are a handful of upperclassmen who set themselves apart as NBA prospects. Some are older in age, while others are four-to-five-year players.

In the last few seasons, we’ve seen players such as Desmond Bane, Malachi Flynn, Chris Duarte, Corey Kispert, and Trey Murphy III really come into their own late in their careers. This season, we are witnessing Kansas senior Ochai Agbaji do the same.

He entered the 2021-22 season with hopes of being the top senior prospect in the class, and has earned that distinction thus far. Agbaji is currently averaging 22.6 points per game while shooting 45.8% from deep on 6.0 attempts per game. Before the year began, my notes on Agbaji read:

“Early on in his career, he was known for his athleticism and defense, but his lack of outside shooting was concerning. He has shown substantial improvement since then, and connected on 37.7% of his three-point attempts last year while shooting 6.9 triples per game. With continued shooting consistency and strong on-ball defense, Agbaji could solidify himself as a viable 3-and-D option at the NBA level.”

Needless to say, he has far surpassed my expectations through the Jayhawks’ first eight games of 2021.

First, let’s dive into the numbers. For many players, as usage rises, the efficiency drops. However, Agbaji has not seen this happen. His usage rate of 25.9% is the highest of his career. Meanwhile, he is currently posting career-high averages in points (22.6), two-point percentage (64.9%), three-point percentage (45.8%), free-throw percentage (76.0%), True Shooting (67.6%) and Effective Field Goal (66.4%) percentages — and career-lows with 1.0 turnovers and 1.1. personal fouls per game.

What has impressed me the most is his versatility on offense. He is scoring out of the pick-and-roll, isolation and off the move, making him incredibly difficult to stop. He currently ranks in the 95th percentile as a pick-and-roll ball handler. While running the offense likely won’t be his role in the NBA, his ability and willingness to do so in a secondary capacity is valuable. He also ranks 95th percentile in transition and in the 98th percentile as a finisher around the basket, which speaks to his combination of athleticism and touch.

His three-point shooting is what stands out the most. His mechanics are smooth, his release is really quick and he wastes little movement. Agbaji continues to hit tough shots off the dribble, at a standstill and with movement as well, truly rounding him out as one of the premier scorers in the country.

Ochai Agbaji is currently No. 32 on BasketballNews.com's 2022 NBA Draft Big Board, but something tells me he won’t be there long.