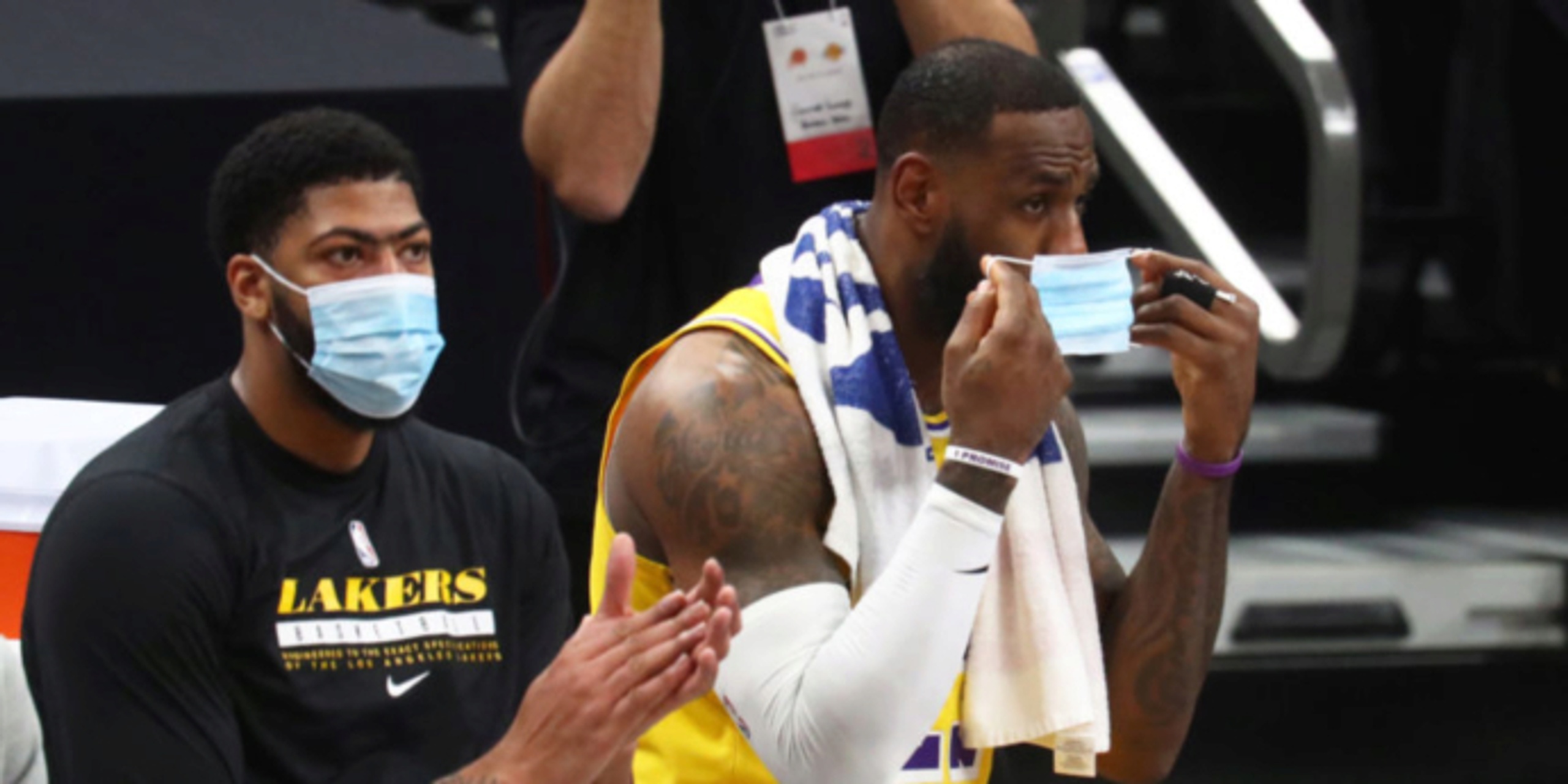 Despite efforts of NBA and union, some players hesitant to get vaccinated

Despite the Herculean efforts of the NBA and the NBPA, the league is encountering a variety of problems in trying to get everyone in the league vaccinated against COVID-19. The teams having the most difficulty getting vaccinations include the Brooklyn Nets, New York Knicks, Boston Celtics, Washington Wizards and Philadelphia 76ers, BasketballNews.com has learned.

Numerous league sources described the situation as an ongoing, daily dilemma in which they are fighting against misinformation, historical truths about government abuse of vaccination programs in Black communities and logistical complications based upon different vaccination qualification rules in different states.

Despite the problems, the New Orleans Pelicans, Golden State Warriors, Atlanta Hawks and Portland Trail Blazers have managed to have team vaccination events — a single event in which members of the organization who wish to receive vaccinations are given doses. Close to half of the league is roughly three weeks away from being freed from strict lockdown rules that one Western Conference executive described as being “worse than the bubble.”

With the United States entering what the government is calling the “fourth wave” of COVID-19 infections, the slow return to normalcy is proving difficult in both the NBA and society at large. A league source, speaking on the condition of anonymity, said teams have been instructed by the league office that they cannot jump the line to get members of their organizations vaccinated, and nobody will be forced to be vaccinated against their will. But at the same time, extraordinary efforts are being made to educate players and team personnel about the merits of vaccination.

The league has incentivized it, too, allowing teams that have 85% of both players and staff fully-vaccinated to be freed from the restrictions -- some of which have been deemed onerous -- that have kept them masked in locker rooms, confined to their hotel rooms without guests on the road and banned from eating at restaurants.

The league defines “fully vaccinated” as being two weeks past the second dose of the Moderna or Pfizer vaccines or the single-dose Johnson & Johnson vaccine.  A handful of players have flown on their own or with the assistance of their agents to states with less restrictive qualification rules. However, despite the incentives, some players and staff are refusing to be vaccinated, citing religious reasons, health concerns (such as allergies) or other personal reasons.

On March 24, the Warriors held a vaccination event at Kaiser Permanente S.F. in Mission Bay, California. There, members of the organization who wished to be were vaccinated received Johnson & Johnson’s single-dose vaccine. The Pelicans were able to hold a vaccination event in their home state of Louisiana because the state has a body-mass index rule that is less-restrictive than in other states. Many members of the organization were able to qualify. Not every team has had the same experience.

One league source described the current degree of difficulty of receiving vaccines as a five on a 1-to-10 scale, whereas it was a three one week ago and a one (a virtually impossibility) one month ago.

On Monday, ESPN’s The Undefeated reported that Andrew Wiggins and Kent Bazemore of Golden State are two players who have said they won't take the vaccine anytime soon.

NBPA executive director Michele Roberts spoke with the Wall Street Journal and confirmed that at least a sect of players have concerns about being vaccinated. Roberts suggests, however, that the vaccines -- which she says are “auditioning” -- are “earning credibility” with her constituents.

NBPA president Chris Paul has been mum on the issue for the last three weeks after being quoted as saying, “I think all of these decisions are personal-type decisions.”

LeBron James made a similar comment earlier this month when asked about the vaccine, agreeing that it's "a private thing."

One source said that one of the most difficult tasks has been dispelling myths being perpetuated by anti-vaccine advocates whose information is being re-reported by some mainstream media companies and spreading on social media and online forums.

Privately, players have expressed that they are hesitant to get the vaccine due to systemic distrust in the U.S. government, in large part due to the infamous "Tuskegee Experiment," league sources told BasketballNews.com.

The program, which took place in Tuskegee, Alabama from 1932 to 1972, was used to author a report entitled “Study of Untreated Syphilis in the Negro Male.” The men who participated in the study were told that they were receiving free health care from the federal government, but they were left untreated for decades. Even after penicillin became widely available, the men never received it. After initially being told that the study would last six months, it continued for 40 years. The study reportedly caused the deaths of 128 participants, either directly from syphilis or from related complications.

The league and union have worked together to start conversations with players and address their concerns. Dr. Leroy Sims, the NBA’s medical director, and Dr. Deverick Anderson, a Duke University medical professor hand-picked by the NBPA, have given informational vaccination presentations to all 30 NBA teams via Zoom.

All of these developments come as more NBA arenas are being opened up to fans. The Boston Celtics played in front of a “full house” of 2,298 masked fans on Monday night after Massachusetts cleared the state's professional sports teams to admit up to 12% capacity.

After a series of infections forced numerous postponed games early this season, especially for the Washington Wizards and Memphis Grizzlies, the league and union agreed to a more restrictive set of rules that, among other things, barred players from having guests in their hotel rooms while on the road.

One adjustment was subsequently made to allow for a pair of 60-minute “exercise” trips outdoors for teams while on the road, but the net effect has been a league-wide case of cabin fever. Worldwide, it is being called “coronavirus fatigue” and includes social isolation leading to social disengagement.

Those speaking with BasketballNews.com said the most optimistic forecasts would have all 30 teams operating under the less restrictive rules prior to the end of the regular season in mid-May, but the equation changes every day. The situation is being complicated by a new surge of cases in several states. Vaccine availability also varies by geographical region.

“Right now, I am scared,” Deborah Birx, the former White House coordinator for pandemic response, said on Monday as U.S. president Joe Biden addressed the nation, saying (among other things), “We are in a life-and-death battle with a virus that is spreading quickly."

Dr. Rochelle Walensky, the director of the Center for Disease Control, fought back tears as she pleaded with Americans to “hold on a little longer” during Monday’s coronavirus briefing at the White House.

A league memo on this subject was obtained by BasketballNews.com and it outlines the benefits that “fully-vaccinated teams” can enjoy. They include not having to wear masks at practice facilities, more flexibility to leave hotels on the road, being served meals on team flights, being allowed to eat outdoors or indoors at restaurants, loosened rules on the timing of daily PCR tests, the ability to hold team meetings at locations other than the court or hotel ballrooms, no COVID testing on off days and no quarantine following exposure to COVID-19. Read the full memo below:

https://t.co/QrFG8xc17r obtained this memo that the NBA sent to all 30 teams. It outlines the benefits that “fully-vaccinated teams” can enjoy. pic.twitter.com/Cjg1shPZZT

The NBA playoffs are beginning in less than two months, and the league was hoping the virus would either be under control by now or that all of its players would all be vaccinated.

Unfortunately, neither has happened.

They’ve made it this far, but obviously, the NBA isn’t totally out of the woods yet.